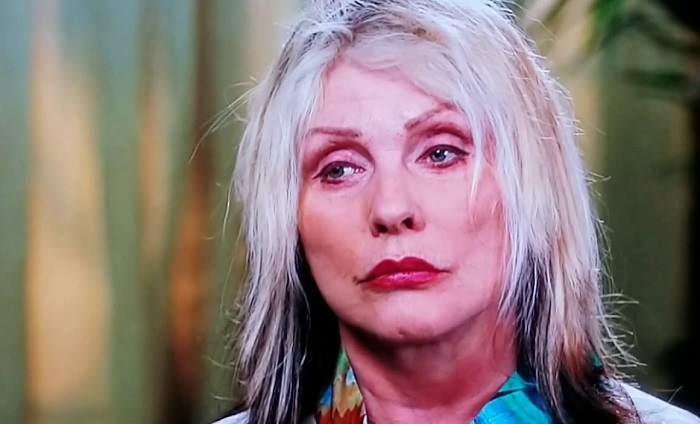 Debbie Harry led a rock band, Blondie, when it was unusual for a woman, and with her eclectic style she inspired many others who followed her on the path of popular music.

More than forty years have passed since she broke into the music scene, but there are still notes on internet sites that teach young girls how to copy the singer’s looks.

Debbie Harry is an artist who made her image a work of art. Blondie is a legendary band because her music was innovative in the late 70s, as well as for what the singer made of her personal aesthetic.

Debbie or Deborah Ann Harry (July 1, 1945, Miami, Florida, United States), is an American singer known worldwide for being the vocalist of the popular band Blondie.

In the late 1960s she began her musical career in the folk rock band the wind in the willows, without major commercial success. She also worked as a bunny in the Playboy club.

It was in the mid-1970s when she met guitarist Chris Stein, then a member of the band The Morticians, and together they founded Blondie, which in a couple of years later would become an important and influential musical band.

Together with Clem Burke (drums), Jimmy Drestri (keyboard) and Gary Valentine (bass), they brought to light their first works Blondie (1976) and Plastic Letters (1977). From this album the single Denis was released, which was number 1 in the United Kingdom.

From this moment on, Blondie and Deborah Harry are all successes. In 1978 they take out Parallel Lines and in 1979 Eat to the beat, where they get several numbers one in the USA and the United Kingdom and other countries. With songs like Heart of glass, Atomic, Dreaming or Call me (from the movie American Gigolo) they reach the top of the charts.

Debbie becomes one of the sexual icons of the time. Her image goes from the pin-up that gives him the same to interpret rock in the CBGB’s New York club than to be dancing disco in the well-known Studio 54. She will be recognized by Madonna as one of her greatest influences.

When she learned of that comment, she replied: Yes, it’s nice that Madonna says that, but I prefer a check.

In 1980 Blondie edited Autoamerican and made a world tour the following year to promote The tide is high and Rapture (number 1 in the United States, in addition, the first hip hop song performed in history by a non-African American or Latin woman).

Her style took another flight when Sprouse began to help her. The designer, who died in 2004, had started her career when she was 14 as an intern with Bill Blass, and after studying at the Rhode Island School of Design she worked at Halston, one of the key fashion brands of the 70s.

The 90’s was all the rage with her graffiti interventions of the Louis Vuitton wallets and caught the attention of Andy Warhol himself, who made her part of her troupe.

Sprouse helped Harry improve her particular style, which played with punk but was not restricted to him, and Warhol was the verdict that the Blondie singer was a true icon of popular culture.

Harry’s factions and blond hair received Warhol’s pop treatment in one of the artist’s famous portraits, becoming part of that select group of women chosen by the artist, such as Elizabeth Taylor and Jackie Kennedy. Warhol’s work that has Harry in the foreground was sold at a Sotheby’s auction in 2011 for $ 5.9 million.

He also took her image to the big screen and acted in films such as Invaded Bodies, by David Cronenberg; Hairspray, by John Waters; Spun, by Jonas Åkerlund; My life without me, by Isabel Coixet, among many others. She also made numerous participations in television, in series such as Sabrina, the teenage witch, and Difficult People.

The band dissolved in 1982, and the singer dedicated herself to her solo career and tried to change her appearance with green, pink and blue wigs.

But the public never stopped associating her with that name that they shouted at her on the street. So she went back to the blond, Blondie got back together and in 1997 they had a great success with Maria. Then they continued recording albums and are currently on tour presenting their new work, Pollinator.

Harry no longer abandoned her platinum hair and, at 73, continues to surprise with her wardrobe choices. Meanwhile, a new generation discovers on the internet a source of inspiration that is much, much more than a muse.

After her separation from Blondie in 1981, Deborah Harry devotes her time to film and song, but this time alone. After a failed return of Blondie with The Hunter (1982), the band dissolves and begins Harry’s work as a soloist with the invaluable help of her partner Chris Stein.

In 1994, she joins The Jazz passengers, a jazz group, with which she releases an Individually Twisted album and offers a concert tour, as well as a CD recorded live from the Vitoria jazz festival concert in 1995.

In 1998 the Blondie meeting was announced in front of a world press conference and they released No exit (1998) with a resounding and round sales success and a classic in record stores with the success Maria.

At 54, Deborah Harry enters the Guinness Book of Records, as the oldest woman to get a number 1 in the UK, and the Blondie band for appearing on the number 1 charts for three consecutive decades.

After a world tour and a year of silence, Blondie returns to the scene in 2003 with the curse of Blondie, whose single Good Boys was less successful than her previous return?

In 2005, for her long career and all her successes, Blondie enters the Rock Hall of Fame, and announces her withdrawal from music with a tour in the United States, which is later canceled and changed by a tour in the Kingdom United in the summer of 2007.

Deborah announced to the press her return as a soloist, and after the tour she made with Cindy Lauper called ‘True Colors Tour’, she announced for September of that same year the release of her latest album, Necessary Evil, when she already has 62 years. Her presentation single is two times blue a pop rock composition.

Harry returned to the blond in 1974, when she joined the band The Stilettos and there she met Chris Stein, the guitarist and composer who would be her partner and s artistic leisure Together they formed a new band and when they had to choose a name, the singer’s hair played a crucial role.

The reproachable masculine custom of saying things about her physical appearance to women on the street had a positive result this time, since hearing that they called her ‘blondie’, she thought it was a very good name for her new project musical. Blondie was accepted, although her idea that all band members dyed blond was completely rejected.

Blondie started playing in the key locations of the mid-70’s Manhattan music scene, such as CBGB and Max’s Kansas City.

“When Blondie exploded on the scene, in the mid-70s,” she recalled, “We couldn’t even imagine that designers could be interested in us,” Harry said in W magazine. We did not have access to that world. Most of our fashion choices (torn net stockings and things attached with hook pins) were cheap, the only thing we could afford.

Blondie arrived at the crossroads between glam rock and the period of deconstruction of punk and the new wave. In fashion, in music, in art, everything had been broken and torn.

We were also very influenced by Warhol’s deconstruction cinema. In addition, Vivienne Westwood and Malcolm McLaren gave the art scene a lot of power.

Once, Malcolm came to visit us in a mobile home full of boxes of rubber clothes and we went completely crazy. That fabulous clothes, basically fetishist: Oh, the rubber! Oh, thin and tight! ”

Blondie would have more budget once her third album, Parallel Lines, brought them to international fame with hits like Heart of Glass and One Way or Another.

“At that time – she says – I always did my own makeup and hair. We didn’t have enough money for someone else to do, “the singer continues in the text. Sometimes I didn’t have time to dye myself, so the roots were as they were. (…) she wore male tuxedo shirts or underwear for outside.

Sometimes I would wear a wedding dress and tear it as I wore it. But my style changed when I met Stephen Sprouse when she moved to my building in the Bowery. She was horrified by the things I tried, like a red dress from the 40s with white Texas boots. I only used what I had. ”

He told me to mix two thirds of peroxide with a third of ammonia and brush it all over my hair so that it reacted to the sun and cleared. It worked. I loved being blonde. I had an adventurous personality and I liked being creative and playing with different roles. For me, it was part of developing and interpreting a character. ”

She kept rinsing her hair at home during high school and when she started working in a beauty salon as a makeup artist she turned herself in to professional hands and became a total blonde.

Then she returned to the chestnut, which she looked when she worked as a waitress in a bunny suit at the Playboy Club in New York, between 1968 and 1973.

“She was a hysterical waitress, very shy at the time. They were all very wild and completely ruined, wanting a thousand things. I, being so shy, was dealing with many personal things that I had to conquer within myself. ”