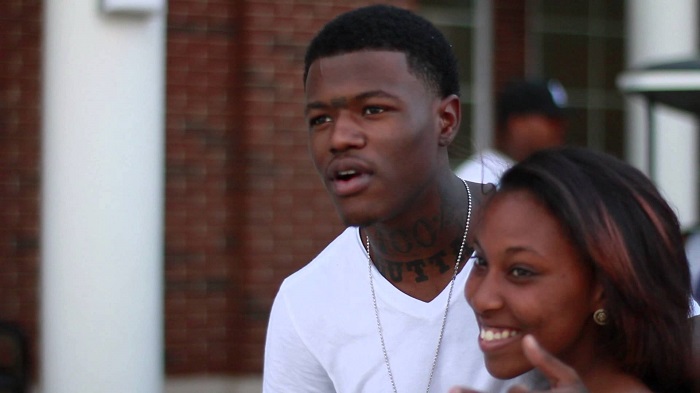 D.C. Young Fly is an American rapper, actor and a comedian – famous for his Vine videos and his appearances on MTV’s TV show called Wild ‘N Out.

He is also a ver popular rapper and artist.

He was born in Atlanta on May 2, 1992. He was raised with two brothers to whom  he is very close. He lived in a dangerous neighborhood and soon he joined teens on the streets, listening to music, rapping and eventually involving into criminal activities.

He grew up on the west side of Atlanta called Adamsville and he attended Benjamin E. Mays High School. He was a well known school troublemaker and a class clown.

Since he was in a street gang he was stabbed and beaten a few times, and one of his brother almost died of stabbing.

After his older brother was killed in 2011, and after he got himself into fights and being stabbed again (four times), he decided to turn his life around and the same year he started posting videos on YouTube and pursuing his musical and comedian career.

In 2013 D.C. started making Vine Videos and got popular very fast. He roasted famous people like LeBron James, Drake, Kevin Hart…His popularity grew up and he became noticed by the big names in this entertainment business.

He is known for his act in MTV show “Wild ‘N Out” which is hosted by Nick Cannon. He was named “Rookie of the year” in that show because of his great act in the first season. He was given their varsity jacket as a gesture and he is still a part of the show. He is also in a romantic relationship with a former actress from the same show.

With a colleague comedian Karlous Miller he hosts a podcast named “85 South Show” where they posted hundreds of episodes of comedian genre.

In 2016 he got his first debut role in David E. Talbert’s film called „Almost Christmas“ in which he costarred Danny Glover and Omar Epps. The film is a comedy-drama and it is covering a Christmas reunion of one dysfunctional family who can’tto seem to be nice one to another.

He got a leading role in an independent film: #digitallivesmatter  (a comedy which judges cyberbullying and hating on internet)  and a role in the movie “My Cousin’s Ghetto Wedding” (a romantic comedy with leading roles of Doug Jones and Claudia Wells).

In his musical career he collaborated with famous Mike Will Made it, Lil Silk, Sy Ari da Kid and B.O.B.

He had a project featured on LiveMixtapes.com which was named “Supplyin’ Pressure”. It was a mixtape featuring many known artists and rappers. And vas introduced on January 22, 2015.

His manager was Anwar Patterson, a co-CEO of Archive Entertainment, the biggest entertainment company in Atlanta.

In 2016 he has signed a contract with ICM Partners. International Creative Management is one of the largest talent agencies in the world, with headquarters in Los Angeles. They sign contracts only with confirmed talents and they will sure offer John many gigs, either in movie production or in music.

Today he is in a happy relationship with his girlfriend Jacky Oh and they have one daughter together, Nova. Jacky Oh is a model and an actress and a former Wild ‘N Out girl, and she is of Brazilian heritage. Her main salary comes from modelling and advertising.

Distinctive Features: a tattoo on his forehead in the memory of his big brother

Although he was on the streets from a very young age, he was arrested for the first time when he was eighteen years old.

He was invited to do opening acts on Chris Brown’s Party tour and he showed up on B.o.B.’s tape “No Genre 2”.

He posted a video on YouTube which showed how he surprised his mom with a new Mercedes-Benz. It was his way to thank her for her patience with him.

D.C. Young Fly became widely known after he started afeud with a comedian Kevin Hart on Instagram that went viral and soon everyone knew all about him.

He has over 3 million followers on Instagram and his videos are among the most shown comic videos on the internet.

The D.C. in his stage name stands for Da Crew. It is the same as his tattoo on his forehead.

D.C. Young Fly is an American comedian and rapper mostly known for his Vine videos and for showing in MTV’s Wild ‘N Out”. He had a very hard childhood and in his late teens he lost his beloved brother. That forced him to change his life and turn it away from streets of Atlanta.

He became popular and today is one of the young artists on the rise, earning more money every day.