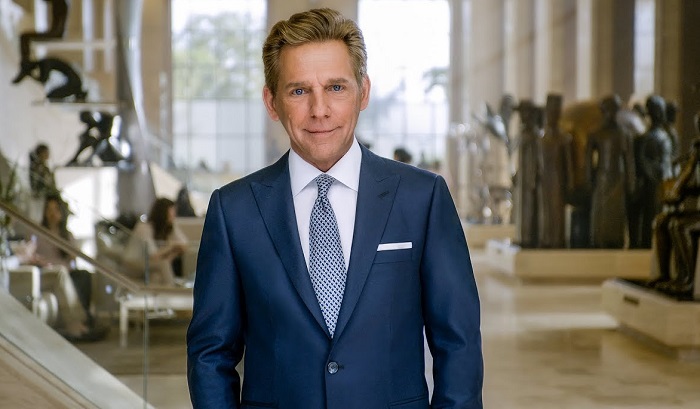 David Miscavige is a known leader of the American Church of Scientology whose position is often questioned by public due to his fast rise in the church and allegations about his immoral leadership and strictness with the members.

Scientology is a religion based on something most people will instantly reject: on the belief all people are Thetans, who came to this planet Teegeeack (today called Earth), by a leader named Xenu.

David’s close friend is a world famous actor Tom Cruise, who gives him both financial and public support.

He was born as David Miscavige on April 30, 1960 in Bucks County, Pennsylvania, United States.

He was brought up in a middle-class family where parents took good care of their children.

He was a normal, active child and played football in the little league. He always had extra energy although he was very tiny.

His father spoke about it and explained how he had to cheat at weighing for football by putting rocksin his trousers.

His mother is named Loretta and his dad is Ronald. He has three siblings; Denise, Lori and Ronald Jr. He was the youngest child in this mixed Polish-Italian family.

His parents lived simply: his father was a trumpet player and his mother stayed at home to take care of the kids. He never thought that they were poor or basic, it was just a way of life he liked.

He wasn’t very healthy as a child, often suffering from allergies, even asthma. Trips to the ER were common for the family. He later recovered, but not fully.

One time, when he was older, he was at the ER and had an epifany.

His parents decided to take him to a Dianetics session because they wanted to try everything to help him. This session helped  him and the whole family joined Scientology the same year.

Once he was at an emergency room with a terrible asthma attack, in 1982/83, he claimed to have a cognition.

They even moved to England, to the headquarters of the Scientology Church, just to be closer to the church.

Several years later, David returned to United States, to Philadelphia where he wanted to complete school. But, he decided to leave school when he was only 16 and move to Florida where he joined a Scientology order called „Sea Org“. He has done that with his parent’s permission.

His work at „Sea Org“ started by him becoming a steward. The founder of Scientology, Ron Hubbard, liked the teenage boys very much and soon he was upgraded to a cameraman.

He became a member of Commodore’s Messenger Organization and soon became their leader, in 1979. He was determined to get on the top of church hierarchy.

In 1980, Hubbard stopped showing at church events and David became his replacement. It seems that Hubbard wrote a testament and left his leadership to David.

One year later, he was a new leader who had to take care of all legal issues which were claimed against Ron Hubbard, even the one involving Mary Sue Hubbard.

She was Ron’s wife and David succeded in persuading her to resign. David handled other officials of the Church the same way.

He was the founder of „Religious Technology Center“ in 1982 and controled use of everything connected to Scientology. He was the chairman of this organization for five years.

In spite of the fact that Hubbard’s son Ronald accused David for taking unrightfull control of the organization, Hubbard denied it himself.

During 70’s David succeeded in getting tax exemption from the IRS because the Church is a nonprofit charitable organization.

In 1986, Ron Hubbard died and David became the Captain of the Church. It was a big event for him and he knew that from this moment on, he has a much greater saying in things.

In 2003, David decided to start building new churches and he opened almost forty churches in the world. What is considered his major work, is the Flag Building, which would have the purpose of training Scientologists.

In 2018, David launched the Scientology Network. He is very intelligent, and knew that television is a great way to get closer to thousands of people in their homes, gather more investers and become a stronger religion.

David is very ambitious about his church and, by his father’s opinion, lusts for power and money. His father claims that when David discovered how other treat him with fear and respect, he started enjoying it and his ego went to the roof.

David rarely speaks out in public or give press statements. He is very secretive and that is one of the reasons that people are curious about him.

That is why his rare communication with the press or TV is very special. One of the examples of it was his first interview he ever had, which was aired on ABC News in 1992.

The interview was held by Ted Koppel in the “Nightline” show and it broke all records. The show was watched by thousands because David had rare interviews and it was hard to get in touch with him.

This became an interview written in history due to the fact that it should have lasted  30 minutes, but went down to hour and a half. It wasn’t  interrupted by commercials not once (even the paid ones!), and the interview received an Emmy the same year.

As for his personal life, he had married a member of Sea Org in 1982. She is named Michelle and she was in the church since she was twelve.

His wife had a close friend who came to the police in 2013, claiming she couldn’t get in touch with her friend Michelle for years.

It seems that Michelle lived in San Jacinto but was forbidden to contact anyone from the outside world. She hasn’t been seen from 2008.

Michelle’s family and friends tried to reach her in more ways than one but they failed to do so.

David has an older brother Ronald, who was also a member of the Sea Org but he left the church in 2000.

His daughter Jenna also left the Sea Org five years later and wrote a book about the organization showing all the negativity.

David’s father Ron also left the church but later found out that he was „watched“ by church members.

Ron’s daughters Denise and Lori (David’s sisters) are still members of Scientology, and have no communication with their father Ron and brother Ron Jr after they have left the church.

Ron published a book „Ruthless: Scientology, My Son David Miscavige, and Me“ and spoke about his son’s bad behaviour toward other scientologists.

Ron describes his own son David as a dictator and a cult leader who has found a way to keep his flock suppresed and poor. He went so far to call his son a sociopath.

Ron ran away from his son,  his Gold Base headquarters and scientology in 2012, hiding from security guards, along with his wife.

Since then, he has never seen his son or any friend from the church.

He also spoke about “The Hole”: a place of incarceration, prison, where David sent all the Scientologists that displeased him in a way. They call it a rehab facility and they don’t call it that way because they think of it as something negative.

David’s close friend is a world famous actor Tom Cruise and he was even his best man at his wedding with Katie Holmes. They were connected through their beliefs.

His views are often considered weird and conservative yet so liberal. To sum things up, they seem like they aren’t realistic to most people and therefore not a lot of people can connect with them and build David’s fanbase.