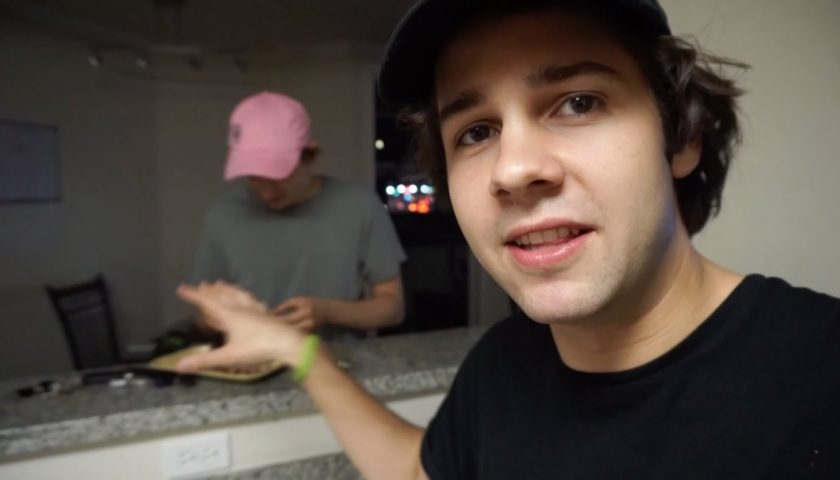 David Dobrik has been called YouTube’s fastest rising vlogger since he managed to transfer from Vine and reach million followers in a year, soon doubling his count. As of July 2017 this 20-year-old vlogger comedian and actor has in total more than 7.2 million followers on YouTube.

What makes him so popular is his uniqueness this article talks about, amongst other juicy facts form Dobrik’s bio, like his girlfriend, weight and of course net worth. Read on!

Dobrik is from Slovakia, but his family moved to the USA when he was little. David was born in a town called Kosice on the 23rd of July 1996.

There is no much info about his life before fame or his close family. David didn’t go to college since he focused on his Vine career while still in high school and quickly made a success.

Dobrik started publishing videos on Vine in 2013 at the age of 17 and attracted 1.3 million teen fans before the network got cancelled. He won the public over with comedy and his boy next door charisma that he adjusted to YouTube by creating a comedy vlog with a sitcom element in it.

At the beginning David made solo improvisations, but quickly started collaborating with other Viners and even co-hosted a YouTube channel called “Second Class” that also had a nice following, listing Dobrik amongst the most sought-after YouTubers.

David is also a rising star in the acting business, with notable roles in TV series like “Prank U”, “The Honest Show” and “The Pain of Painting”. Dobrik is also amongst the YouTubers appearing in the new comedy movie “Airplane mode”. In the movie such celebrities like Jake and Logan Paul, Mikaela Hoover, Chloe Bridges, Nick Swardson… travel abroad together on an airplane about to crash. It’s currently still in post-production.

We don’t know much about Dobrik’s family, although he sometimes mentions his siblings on Twitter. He has two sisters Ester and Sara and a brother named Toby.

David is in a steady relationship with a fellow-internet celebrity Liza Koshy, who is even more popular than Dobrik with her 10.5 million followers. The couple successfully manages to avoid scandals and controversies celebs usually tend to get into.

Dobrik owns a bunny rabbit named Bailey. He often publishes photos with him and makes jokes about Bailey’s pooping habits.

From YouTube advertisements, mostly, David Dobrik earns a net worth of $2 million.

He has an astonishing number of almost two million video views per day that guarantees him a sure income increase in the future.

Dobrik appeals to his teenage audience because he has good looks, unique sense of humor and a rebel boy feel about him. David dropped out of school and now earns an enviable income by just having fun with his friends and being himself.

He is never seen without a huge smile that has become Dobrik’s trademark. He wears a big smile even when taking a photo with his hand hurt and bloody in the hospital bed.

David Dobrik is one of YouTube’s fastest rising vloggers since he boasts more than 7.2 million followers on the network and a video reach of almost two million video views per day insuring Dobrik a $2 million net worth as of middle 2017.

This 21-year-old has the charisma of an A class celebrity: always wearing a big smile and a spark for humor to juice it up even more. His personality and style mainly appeals to teenagers he initially won over on Vine, and continued to dazzle with his YouTube vlogs, skits, challenges…

Born in Slovakia and raised in the USA, David dropped out of high school and focused on his Vine videos. After first becoming a Vine star, Dobrik now has 7.2 million followers on YouTube and an estimated net worth of $2 million. He is in a steady relationship with Liza Koshy, also a Vine star.