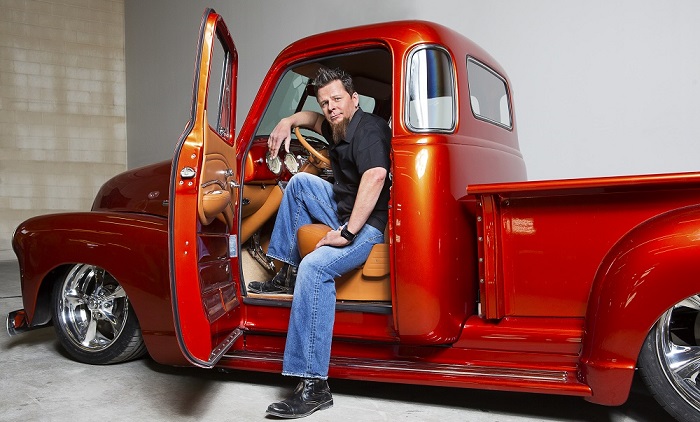 Dave Kindig is a famous American Hot Rod designer and owner of a custom cars restoration shop. His estimated net worth is around 2,5 million dollars.

As a young kid, Dave was playing with hot wheels and his passion for cars began to grow. He never thought twice about what he was going to do with his life, he already knew he wanted to do something related to the thing he was most passionate about – vehicles.

All through his schooling and college he was always customizing his friends’ or his own vehicles with his drawings.

He turned to car designing and became a serious businessman and a visionar.

His first eight working years were in the High Performance Coatings where he had an oportunity to travel all accross America, meet car designers and builders and other enthusiasts. This helped him to grow both as a businessman and an artist. He learned a lot things and new tehniques.

After the birth of their second child, Dave and Charity decided to start their own venture although they had very little money but they had great passion for it. They believed they wereg going to make it.

In 1999 Dave and his wife Charity started building their design business together. It is called Kindig-It Design. Their shop is a place where you can take your car to, leave it for a full custom makeover and, after some time, get your own work of art.

The shop is stationed in Salt Lake City in Utah.

Dave has a lot of experience as an engineer, but it was working with Hot Wheels and Lego that made his drawing become even more spectacular.

Today you can learn anything you want to know about him and his car designs on his own web page www.kindigit.com

Dave and Charity met while they were both spending their evenings going in and out of dance clubs in State Street.

She was also very influenced by her parents who took her to car shows and exibits since she was eight years old.

Her parents supported her passion for cars so she remained in that business working in a warehouse connected to car business. Her father was a hot rodder and her mother was a big fan of classic cars.

They are married for 25 years and they have two kids together: Baylee and Drew. Both of their kids work at their parents’ business. They claim their parents don’t pressure them to love cars, but we guess it runs in the family.

Dave says he believes it’s faith that they ended up together. He claims God wanted to tell him he should open his own car-related business when he sent him a woman which aspires the same. Today, their marriage is full of love and cars!

Dave has won a lot of awards. Most of them are related to arts and design, since Dave is not only a mechanic, but a true artist. The others are for building, since Dave’s hobby is also pimping cars up by replacing some of the technicalities.

He and his wife started another venture, besides cars: a brand of clothing, accessories and hats.

Their daughter Baylee started working in their shop when she was 16 and today she is a head of one department.

Dave appeared in a TV series ( reality TV ) named ‘Beyond Bitchin’ Rides’ that started showing in 2014.

Dave Kindig is an artist and a designer, famous for his drawing and making unique cars.

He was interested in cars since he was a kid and today he is living his dream and doing what he likes.