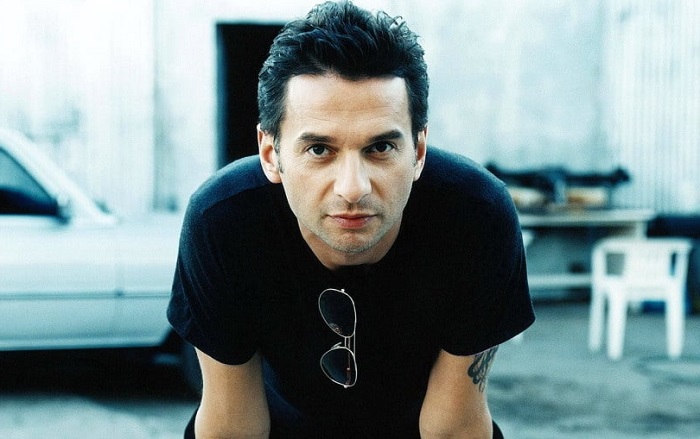 Dave Gahan is one of the most popular lead singers of a group in the world. He is often involved in Top lists of greatest singers by most appreciated magazines and critics.

He is known for his work as the frontman of a worldwide popular electronic group named Depeche Mode. He has also released several solo projects but not nearly successful as the owns he made with Depeche Mode.

He was born as David Callout in the city of Epping, in the county of Essex in England, on May 9th, 1962.

Dave grew up in a working-class family raised by his mother Sylvia and step-father Jack.

His own father Len Calcot was a bus-driver and he left the family when Dave was still a baby, leaving his wife, a conductress named Sylvia, to take care of their children, Dave and Sue.

His mother remarried two years later to Jack Gahan and Dave gained his surname. Jack conducted with his step-children like they were his own children.

Dave thought that Jack was his real father and didn’t know his real dad until Jack died in 1971 when Dave was only 10 years old.

His real natural father showed up at their home then. But he stayed in contact with them for only one year and David never saw him again.

During his time at Barstable School Gahan started having problems with authority and school and began making problems.

Those problems eventually ended in his suspension from school. He often stole motors and cars and used them for a joyride.

Since he had problems with school and often ended up in detention his probation officer was sure that he would end up in jail soon. Fortunately, the music changed his life.

In the spring of 1980, three musicians and friends Martin Gore, Andy Fletcher and Vince Clarke gathered up and decided to form a band.

Martin Gore was the chief songwriter of the band and Andy Fletcher was the synth player. They both attended the James Hornsby School in Basildon which was three miles away from Dave’s school.

Dave eventually managed to gain a certificate from Southend Technical College. It made him qualified for working in window dressing.

Dave loved to sing and he already knew to play several instruments. He played harmonica, guitar, keyboards, and tambourine.

They named it „Composition of Sound“. Vince Clarke accidentally heard Dave singing to David Bowie’s song and invited him to join him.

That was the beginning of a longtime collaboration and the birth of Depeche Mode. The name came from a magazine and was suggested by Dave himself.

The band became pioneers of new synthpop waves at the beginning of the ’80s and became one of the most popular bands ever.

In 1981, the band has released their debut album. It was titled „Speak & Spell“ through Mute label.

The album went up to No.10. on UK Charts and was very well received by the critics. After the release of the album Vince Clarke left the band and Martin Gore became the main songwriter, with Dave as his co-writer.

Their second album was named „A Broken Frame“ and it was released in 1982 through Mute Records. The album came to No. 8 of UK Albums and was later certified gold.

Vince Clarke was replaced by Alan Wilder in 1982 as well.

In 1983 they released the „Construction Time Again“ studio album and it rose to No.6 on the UK Charts. The album rose a hit song „Everything Counts“.

In 1984, the fourth studio album came out under the title „Some Great Reward“. It was still released through Mute Records. The album rose to No.5 on the UK Charts and gained huge popularity.

The band went on a tour titled the same as the album. The album produced three great singles: „People Are People“, „Master and Servant“ and „Blasphemous Rumours“. The album was certified Gold in UK and Germany and Platinum in the US.

In 1987 the band released an album called „Music for the Masses“ with one of their greatest hits „Strangelove“ and „Never Let Me Down Again“.

Three years later „Violator“ was released with their most notable hit songs: „Enjoy the Silence“ and „Personal Jesus“. They became worldwide known and „World in My Eyes“ became one of the most listened songs that year.

This was the 1st album band made that entered US Billboard 200 chart in first Top 10 positions. The album was certified Platinum in the US three times.

In 1993, their 8th studio album „Songs of Faith and Devotion“ was released and went to No.1. on both US Charts and UK Charts.

In that period the band members started having issues and differences, causing Alan Wilder to leave the band. A lot of fans even fought that the band would split but that didn’t happen.

Dave Gahan was very unsatisfied with the fact that Martin Gore wrote all the lyrics and would not let him co-write. This was a huge problem between two of them and it eventually rose to a bigger issue and the split of the band.

The band recovered from their issues and released their 9th album. It was named „Ultra“. It was released through Mute Records as most of their albums did. It was completely produced by Tim Simenon.

One of the issues members had was Dave Gahan’s drug addiction which disturbed their work and partnership.

In 2001, their 10th album called „Exciter“ came out and the band went on the Exciter Tour. The album was certified Gold in Canada and the US and their Exciter Tour was a huge success.

In 2005 they released „Playing the Angel“ which also received positive reviews and in 2009 „Sounds of the Universe“ which was similarly well taken.

In 2004 David started songwriting for the band and has written three songs for their album „Playing the Angel“. His single „Suffer Well“ was nominated for a Grammy Award.

In 2003 Dave released his first solo album titled „Paper Monsters“ and held the same-named tour The album was successful but not as much as Depeche Mode’s albums were.

In 2007 he released his 2nd album called „Hourglass“ which was received good by the critics but was seen as too similar to the bands.

Dave collaborated with many artists. He was the lead singer for the album „The Light the Dead Sea“ from „The SoulSvers Soundsystem“ electronic production team.

He also sang with SixToes and Luke Smith from „Clor“.

He had a heart attack during the concert in 1993 and he was stretched out of the concert while his friends from the group continued performing.

In 1996, he overdosed in a Hollywood Hotel and almost died because of it.

He is married for the 3rd time. His first wife Joanne was married to him from 1985 to 1991 and they have a son Jack together.

Then he got married to Theresa with whom he had no children for four years, until 1996.

He got married to Jennifer Skliad in 1999 and has a daughter Stella with her. He also adopted her son Jimmy. They met at a detox center where he signed in after the overdose problem.

In 2009 he was diagnosed with a bladder tumor but it was caught early so he was operated and saved.

He has converted to the Greek Orthodox Church.

During the time the band was on the Devotional tour Dave was fixated on vampires and had a bed shaped like a coffin. It was in a period when he abused drugs a lot. He also tried to bite a British journalist on the neck.

He has a giant tattoo of angel wings on his chest. The tattoo master did it over ten hours but Dave was very patient about it because he liked it very much.

Dave likes to oil-paint and he did a lot of pictures. He says that it makes him very calm and that he is very thankful for everything he has learned about art.

Dave has three children: a daughter Stella Rose, and two sons named Jack and James. He loves them very much and wishes he could spend even more time with them.

In 2015 Dave came to Israel to attend the wedding of his eldest son Jack Gahan.

He got married to a native woman Sigal Mamis in a traditional Jewish wedding ceremony.

His son met his bride on the 2009 Depeche Mode concert which took place in Tel Aviv. They fell in love and got married six years later.