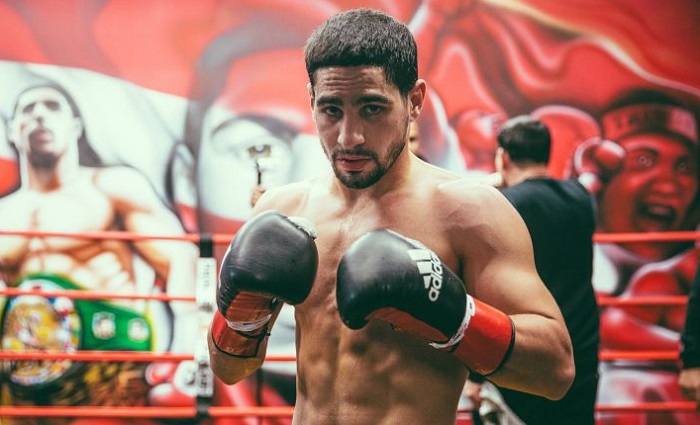 Danny Garcia is a known popular American pro boxer who is known for his multiple championship winnings, both in light welterweight and in welterweight category.

He is still an active boxer who is currently fighting to keep his title. Little did he know that, when he was dreaming of becoming a famous athlete, he would actually become one.

He was born as Danny Oscar Garcia on March 20, 1988 in a town of Philadelphia in the state of Pennsylvania in United States. He loves the United States and says that it had given him many opportunities.

If he hadn’t lived in the USA, he wouldn’t have met all of the great coaches and the awesome players he collaborated with. However, he never forgets about hos roots.

His mother originated from Bayamon in Puerto Rico and his father was a boxer and is the one responsible for getting Danny interested in boxing.

He was around 10 year old when his father took him to the Harrowgate Boxing Club in Philadelphia to train. 10 years was the minimum limit of age to get into boxing classes.

His father Angel was his son’s boxing coach and focused on his son, hoping that he would become a great fighter as he did. He is very thankful of his family being really supportive about his career. Although he was never a golden kid, they didn’t give up on him and that left a huge impact on his work.

Danny was, as his father, strongly bonded with the Puerto Rican community in Philadelphia and he hoped to become one of the greatest Puerto Rican boxers in the history. He says that nobody can take the pride of being a Puerto Rican away from him. Although he is thankful for his parents who decided to move to the USA to provide the family with better chances, he said that he still remembers his Puerto Rican roots.

Danny Garcia admired his father but was especially big fan of Carlos Ortiz who was inducted into the Boxing Hall of Fame.

Danny went to George Washington High School in Nort Philadelphia. He was never really a student that loved studying or enjoyed being in school all of the time. The thing is, he was always more interested in sport and since he started to train from an early age, he didn’t bother too much studying.

In 2005 he was already the Under-19 National Champion which was a great success for him and his dad. They already knew that he was going to be one of the most famous boxers in the world.

He has won the Tammer Tournament the same year and in 2006 he became the United States Amateur Boxing National Champion. This was his first big win and he was very proud of it because he knew that more are about to come. He was just getting started.

His first professional fight was at the end of 2007 when he stood against Mike Denby in Atlantic City. He managed to knockdown Denby three times in the fight and win it easily. This was a great success for someone who was not really experienced. The media became interested during that match.

His next fight was a few weeks later when he won the fight against Jesus Villareal in Las Vegas. He loves to fight in Las Vegas because the audience is always pretty wild and he likes the adrenaline.

In January 2008 he defeated Marlo Cortez in Cabazon in California, also by knockdown. This was a really big win as well and he started to gain faithful fans.

Two months later he won a fight against Charles Wade in Las Vegas. This was a really important match for him because he wanted to impress his old Las Vegas fans again.

In April 2008, he was in a match against Guadalape Diaz in Las Vegas. He took Diaz down with heavy barrage of punches and the refferee stopped the fight. He won his 5th fight in his professional career.

The next fight was agains Julio Gamboa in May the same year and he won it by unanimous decision. He also won in the match against Dean Nash, this time by technical knockout.

In 2010, he gained a first more serious oponent: Ashley Theophane. This time Danny won but the judges weren’t unanimous. People started to create controversy about this match and therefore the boxer had some issues.

In 2011 he won Nate Campbell and Kendall Holt, getting himself NABO Jr. welterweight belt. This was a big win when it comes to his comfort zone. He said that it was something that he had to do in order to grow more as an athlete.

His first chance to fight for a world title came in 2012 when he fought against a mexican boxer named Erik Morales in Houston in Texas.

In the end, Morales weighted 2 pound over the limit so he lost his title and Garcia gained it. Later he won over $200,000  in this fight.

Garcia’s next fight was against Amir Khan for the WBA title and the two of them met in Las Vegas, in July 2012. Although Khan started the match very rough and seemed to be the favorite, he was beaten by Garcia by a TKO.

In the summer of 2012 Garcia fought against Erik Morales again, but one day before the match Morales was positive on a drug test. Garcia still decided to go along with the match since it could bring him $1 million.

Danny knock out Morales in the 4th round and gained good financial reward. This was a great opportunity to give back to his parents who were always there for him. He is always very happy when he can buy them something and give them love back.

In April 2013, Danny stood against Zab Judah, a known boxer who was defending his light welterweight belt for the 4th time. Garcia won this fight by unanimous decision and earned his biggest prize till then: $1,25 million.

In July, 2013 he stood in a fight against Lucas Mattyse, Argentine fighter and won the fight by unanmous decision. This was Mattysse’s first loss. Danny gained his Lineal light welterweight title with this win.

Stiff Jab named Garcia the boxer of the 2013. In 2014 he had a big fight settled in his parent’s country of birth, in Puerto Rico. He won the match against Coliseo Ruben Rodriguez with majority decision of the judges.

His next oponent was Rod Salka, who was considered to be worse fighter than Garcia and Garcia won by knocking him down in the 2nd round. This gained negative publicity since it looked like Garcia chose a weaker oponent to ensure his winning. He later stated that no one can judge him because they are not in his shoes.

In April, 2015 his fight against Lamont Peterson was aired on NBC Priemtime and it was considered to be a very interesting fight since both of fighters wanted to prove their skills.

Although Peterson was great, Danny Garcia was even greater and he won this fight by a majority decision earning himself a $1,5 million.

His next winning was a fight in June 2015 when he beaten Paulie Maligmaggi in Brooklyn in front of eight thousand people. He won the next fight too.

This t ime it was against Robert Guerrero and he won by unanimous decision, Garcia earned another $1,5 million. This is a huge amount of money and it was pretty important for him to win this one.

Garcia’s next fight was against Samuel Vargas, a Colombian fighter and it was arranged in Philadelphia.

He won the match which was stopped in round 7. After a long time, Garcia lost a fight and it was in January 2017.

He was fighting Keith Thurman, the WBA title holder and Keith won by a split decision. Although he lost the fight, he had earned $2 million.

This fight was special because it had almost 4 million viewers and it was a record for a boxing telecast.

Danny fought Brandon Rios in February 2018 in Las Vegas and won by the scores. He has earned $1,25 million.

In April 2018 Porter had to fight Garcia for the vacant title Thurman vacated.

The fight was in September 2018 in Brooklyn and Garcia was defeated by unanimous decision. Although he lost the fight he eventually earned 1,2 million which was higher than Porter’s $1 million.

In 2013 Danny Garcia was named as the Philadelphia Pro Athlete of 2013.

His next fight will be on April 20, 2019 against Adrien Granados, They will be fighting for a vaccant welterweight title.

His nickname is „Swift“. Many people think that this relates to his old childhood nickname, but the media is speculating that it simply came from his fighting strategy.

He won 56% of the fights by knockdowns. He owns his own „DSG“ ( which stands for Danny Swift Garcia) clothing brand and has a web-shop for you to buy.

As for his personal life, he is very close to his family. His mother Marissa is his chef, his father is his coach and his brother Erik is his manager.

He always talks about his family and is very proud of everything they have achieved. Although he would like to see them next to him all of the time, he knows that it is not possible because he has to work and therefore he travels a lot. This is also one of the main reasons why he is still single. It is tough to settle down if you’re a big athlete.

Even though he has a lot of money he still wants to live with his family. He bought himself a big house in Phialdelphia and his parents moved in to it, just as his sisters did too. He says he wouldn’t have ut any other way.

Danny is in a long relationship with an entertainer Erica Mendez. They have a daughter called Philly together. They are both very active on Instagram. He has over half a million followers on his Instagram account.