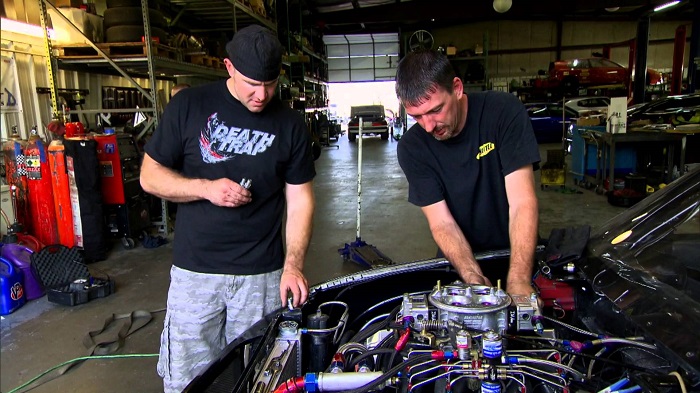 Daddy Dave is a famois car racer and adventurist, putting his life in danger on the streets of Oklahoma. He is well known because of his show called Street Outlaws.

He was raised by Peter and Marge Comstock, together with his brothers in Shawnee, Oklahoma , where he was also born on April 4th, 1973.

As a teenager, at the age of 16, he started driving his parents car which was a Chevy Impala (1978). He fell in love with driving which ultimately led him to car racing.

He became very popular after he and Justin Shearer started acting in a TV series reality TV show called Street Outlaws which is showing on Discovery Channel.

Street Outlaws is a series where you can watch the best Oklahoma underground street racing cars and their racers, beting on their money and, as you can see, beting also their lives.

He was almost killed in August 2015 in a serious crash. He was driving his GMC Sonoma S10 pickup truck from 1996. The crash ended up with him hitting the wall and flipping six times, which is not surprising since his speed was abnormally high.

The  crashed car was bery expensive,  customized with parts that costed over one hundred thousand dollars.

He suffered a very serious concussion, hurt his shoulder very bad and was battered and bruised ( his lung was severely bruised too), all in front of TV cameras during the shoot.

Most of his injuries came from a gas bottle that broke free and struck his head during the crash. He was extremely lucky to loive through this accident and he can thank it all to the helmet he wore at the time.

After the accident he started making his new dream car, a 1963 Chevy Nova, named Goliath 2.0. This car was also totally customized to his wishes and made by his hands. He is only sure in his own work and the work of his employees so his car was all made in his own car repair shop.

He dated Cassie, his wife, for a very long time before they got married.

She was always by his side, especially after the wreck, sitting by his hospital bed. Cassie posted everything about his recovery on his Facebook page.

Although she wanted him to quit racing after the crash, after a while she knew that was impossible. He is in love not only with her but with the adrenaline brought by racing.

His first car, or to be more exact, the wrecks of his first car arw resting in the back of his store in Edmond.

He also has a store where you can buy hats and clothes.

He still has no memory of the car crash and hours after, in the hospital, where he was in surgery.

He has his own car repair shop so his net worth comes not only from TV but from his own two hands.