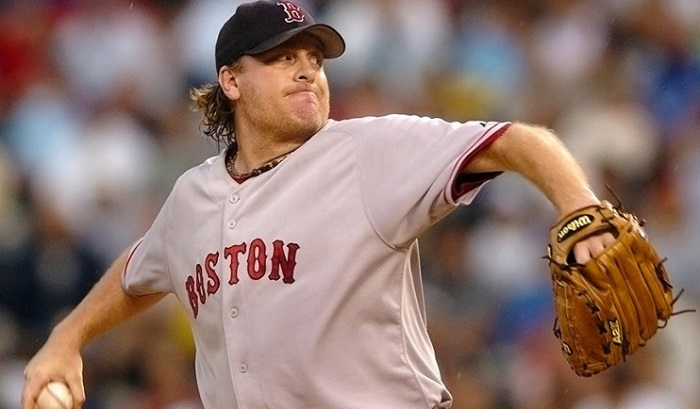 Curt Schilling is a very known sportsman who got involved in video game developing after he retired from baseball. He was a very popular baseball player who broke several records and who is still very active in society although is retired for some time.

He is also very interested in politics and is a big supporter of Donald Trump, and he even had some political aspirations in the past.

He was born as Curtis Montague Schilling on November 14, 1966, in a town of Anchorage, Alaska.
Little did his parents know that he was going to be pretty famous.

His father Cliff worked for the US Army over 20 years and was a sergeant in an Air Force Base in Anchorage where his son was born. His mother’s name is Mary and he was their middle child.

He was raised in a conservative environment which later set the course of his wannabe political career. He said that he personally thinks that he was actually really happy during his childhood and he is thankful that he was raised the way he was.

His father Cliff always loved baseball so he introduced Curt to it while Curt was just a little kid. He was very happy with all the time his father spent with him on the baseball court and remembers it as his best childhood memories.

After he was finished with his military work in Anchorage, the whole Schilling family relocated to Kentucky and after that, they have made it to Missouri. They have finally settled in the town of  Phoenix in the Arizona state.

Curt attended Shadow Mountain High School located in Phoenix where he played baseball for the high school team. After his graduation, he enrolled the Yavapai Junior College in Arizona because of their strong baseball team. He was aiming to make a career in baseball since he was always so interested in it and was always very pleased by playing this sport.

Curt was later drafted by the Boston Red Sox in 1986. This was also a big moment in his career and he started to spend much more time devoted to this part of his career, rather than pursuing some personal interests.

He spent over two years playing baseball in minor leagues with no movement forward before he was traded in 1988 when he became a new player for Baltimore Orioles.

In 1991 he joined Houston Astros but he was very soon traded to the Philadelphia Phillies in 1992 which proved to be the best thing that happened to him in his career.

Philadephia Phillies was a baseball team that offered him a chance to show his skills after he was put on the place of the pitcher. He decided to take that chance and he aced in his new role.

In 1993 he was awarded the MVP (Most Valuable Player) Award and he became a very important pitcher for the team. A lot of his teammates and his fans started relying on his great game. He gained the trust of his coach and he was very well respected in the team.

He was named into the All-Star team for three years in a row which is a big success for every baseball player and he was the starter of the 1999 game.

Although he was making changes for the team and led them to many victories he wasn’t happy with the fact that the rest of the team was not so efficient and that everyone has big expectations for him and a lot smaller for the rest of his team. That is why he asked the management of his team to be traded to Arizona Diamondbacks.

He joined the Diamondbacks in the summer of 2000. He was one of their best players and leaders in the number of pitched wins of the entire team.

In 2001 he was one of the most important players in 7-0 win over the New York Yankees. This was a great victory for his team and will always be remembered for his performance.

In 2001 he received the “Sportsmen of the Year” award by Sports Illustrated. This was a huge honor for him and he was very thankful to be featured. This brought him a lot of fans as well.

He also gained both the Roberto Clemente Award and the Branch Rickey Award. He did really good that year.

In 2002 he was traded to the Boston Red Sox and one year later he won the 20th game.

In 2003 his team succeeded in making an appearance in the World Series for the first time since 1986.

Although his ankle was seriously injured he continued playing. In the sixth game, he made good numbers although everybody noticed that his sock was all bloody and that he is playing with an injury. This bloody sock in now in the Baseball Hall of Fame.

The 2005 season wasn’t good for him nor for his team since his ankle injury returned and the Red Sox were beaten in the playoffs by the Chicago White Sox.

In 2006 he was completely recovered and came to the number of 200 career wins. This is a very good number and he is very proud of it, for not many people could have done this and he was truly one of a kind when it comes to this.

Although he was thinking about retirement in 2007 he has changed his mind and decided to stay in the game for one more season. He shared this with the public on the “Dennis and Callahan” show.

His third win in the 2007 playoffs brought him the title of the second pitcher ever to start and to win World Series Game while being over 40 years old.

He signed a contract with Boston Red Sox for a period of one year (2008 season). He soon came to the disabled list since he hurt his right shoulder. In the summer of 2008, he had to undergo a surgery of his biceps.

In the spring of 2009, he announced that he would retire now because there was no point in him to play and get injured all the time. In 2013 he was inducted into the Wall of Fame for Philadephia Phillies team.

In 2010 he was inducted into Arizona Hall of Fame and two years later into Boston Hall of Fame. He also received “Baseball’s Most Caring Athlete” Award and the “Good Guy” award.

He was hired by the ESPN as their analyst in 2010. He worked in their studio for the show named “Baseball Tonight”. They were so satisfied by his work that they extended a contract with him in 2013 in a period of several years. He became the member of their broadcast team.

He was fired from ESPN in 2016 after he posted controversial statements in his Tweets.

He also tried himself as a businessman in the world of gaming. He started his company names “38 studios” which released a game “Kingdoms of Amalur: Reckoning”. The company bankrupted and he was sued by the state for not paying back his loan.

1992 was one of the best seasons of his life and was also the year when he married his girlfriend named Shonda Michelle Brewer from Baltimore. They have met in Foot Locker. This was surely a year to remember. He said that he was very thankful for it.

The whole Schilling family is very involved in charity. They were very active in raising money for ALS and raised $10 million in 15 years of activity of their charity foundation. He won the 2001 Hutch Award for his work in charity. This gave him a lot of publicity and some media started to think that he is doing the whole thing for publicity only, but he claims that it’s surely not like that.

Shonda and he have four children together and interestingly enough, all their names start with a letter G: Gehrig, Gabriella, Garrison, and Giant. Gehrig got his name after a famous baseball player Lou Gehrig.

In the year 2000, his family was struck with a tragedy: Shonda, his wife, was diagnosed with melanoma and she had to go through a series of surgeries. Curt got involved in the work of “Shade Foundation” two years later.

In 2002 he was named “Young Benefactor of the Year”. This was a pretty nice thing to hear and he was very happy to be featured in media again. He couldn’t be happier about it.

In 2014, Curt was also diagnosed with a serious illness: a mouth cancer. He had to undergo both radiation and chemo and he also lost a lot of weight. By the end of the year, his cancer went into remission. This was a very hard period of his life and he said that he suddenly learned a lot about himself and his life priorities.

The other members of the family were also dealing with issues. Gehrig had an eating disorder as a kid. Gabriella had problems with hearing. Grant was diagnosed with Asperger’s syndrome.

His daughter Gabby had problems with online bullying during school.

His wife published a book “The Best Kind of Different: Our Family’s Journey with Asperger’s Syndrome” which brought light to their private life.

His nickname is “The Big Schill”. No one is sure about this nickname and he doesn’t want to share anything about it since it seems to be an internal joke.

He is known for his conservative views. He disapproves same-sex marriages and thinks Muslims are dangerous for the country.