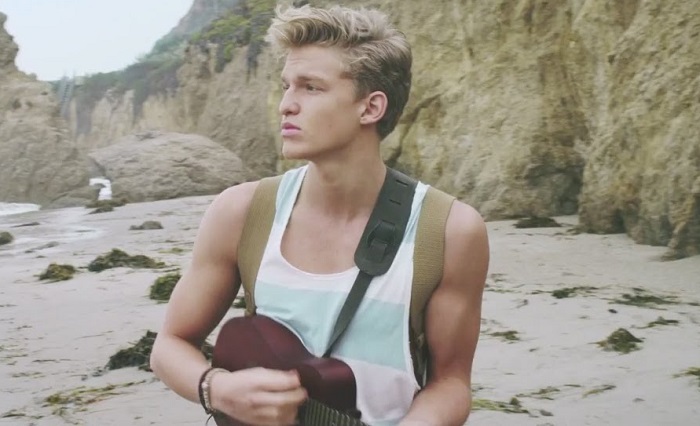 Cody Simpson is a singer, actor, dancer and model from Australia. He is currently signed to ICM Partners, a talent agency.

Since 2018 he played the role of Dmitry in „Anastasia“, a Broadway musical.

He stopped playing this role in April of 2019.

He won the first season of Australia’s show titled „The Masked Singer“ in 2019.

Cody was born on January 11th in 1997  in the place called the Gold Coast which is  located in Queensland in Australia.

He had a talent for swimming since he was very young which was recognized in his school. He was coached by Ken Nixon and was a part of the Miami Swimming Club.

In 2009 he won two gold medals on the Queensland Swimming Championship and it was a huge achievement for him.

His mother worked as a volunteer at the swimming club too.

Cody is the eldest child and has younger siblings, Alli and Tomi. He gets along with all of his siblings very well.

In 2009 Cody started uploading his songs on Youtube. He sang songs like „I Want You Back“ by The Jacksons, „I’m Yours“ by Jason Mraz and he also loved to do covers of Justin Timberlake’s songs like „Senorita“ and also „Cry Me a River“.

He uploaded some original songs like „Perfect“ and „One“.

He was discovered due to his YouTube channel by Shawn Campbell.

In May of 2010, Cody released his debut single called „iYiYi“ and it featured a rapper Flo Rida on it.

He continued making songs and released his first music video for the song „Summertime“ in September that year.

In June he moved to Los Angeles and his family to work on his music and due to the fact that he had to record songs with Shawn Campbell.

That month he also appeared on Sunrise.

It was also stated that month that Cody will be joining other artists on the Camplified 2010 Tour that goes across the US. This tour ended in August of 2010.

He also went to another US Tour that year and in it visited 9 states.

Simpson recorded a cover of „I Want Candy“ originally by The Strangeloves and it was featured in an animated movie called „Hop“.

In 2011 Cody was allegedly thrown eggs at his performance in Sydney. In the show „The Kyle & Jackie O Show“ he stated that they weren’t eggs and that he was very upset because the show had to be canceled for security reasons.

In April he started his „the Waiting 4U tour“ along with Greyson Chance. It started in Utah and ended in 2011 in Oregon.

In August of 2011, he was on The Today Show as a guest and spoke about his following career moves.

After the release of his second EP, he started Coast to Coast Mall Tour. It started in New York and finished in California.

In September we found out that Cody Simpson’s new manager is Scooter Braun, who turned Justin Bieber into a huge star.

The Wish Factory released dolls of Cody Simpson in 2011. They became very popular and were sold in thousands.

In 2012 he released another EP this time titled „Preview to Paradise“. It had four songs from an upcoming album titled „Paradise“. This debut studio album was released in October of 2012.

In 2013 Cody went on a Europe Tour with Justin Bieber, as his opening artist. He was very proud of this achievement and was pleased to work with his idol.

That summer he went on the Paradise Tour with Before You Exit and Ryan Beatty.

In November of 2013, Cody released an acoustic album called „The Acoustic Sessions“ with songs like „All Day“, „Wish U Were Here“, „Pretty Brown Eyes“ and „La Da Dee“. He also put a cover of „Please Come Home for Christmas“ on this album.

In 2014 Cody was a part of the 18th season of a famous show „Dancing with the Stars“. He was working with a professional dancer called Witney Carson. The two of them finished in 9th place because they were eliminated in the fifth week.

He also went on an acoustic tour from June to July of 2014. He was on this tour with Jackson Harris.

In August that year he stated that he isn’t signed to Atlantic anymore.

He left because they weren’t getting along and he is unsigned currently.

In 2015 it was planned for Cody’s upcoming album „Free“ to be released in June but it was postponed to July. In February he performed a single „Flower“ from this album on Good Morning America.

He created his own label „Coast House“ and released this album with a producer „Cisco Adler“ and included a lot of songwriters like Donavon Frankenreiter and G. Love.

Simpson performed „New Problems“ on Today show on NBC in July of 2015.

After that Cody stated that he is taking a long break from his solo artistry to start a band. He said that his band members will be Khari Mateen and Adrian Cota.

This new band was made in 2017 and was called „Cody Simpson and the Tide“. Their debut was a song called „Waiting for the Tide“. In this band, Cody was a vocalist and played guitar, Adrian Cota was playing drums, and Shareef Addo played the bass.

In the fall of 2017 they released their debut EP and it was called „Wave One“. Their genre was described as blues, pop, and rock altogether. The EP contained four songs and it talked about unity and love and also environmentalism.

The single „Waiting for the Tide“ came from a poem Cody made about oceans and water levels rising which is a big issue.

In the summer of 2018, they released a music video for the song „Underwater“. After that they had a tour in California.

In 2019, after 3 years of working together, they split up and decided to go separate ways, building their solo careers alone.

In 2019 he was on „The Masked Singer Australia“ and was a robot and won the show.

He stated that his upcoming solo album (which will be full length) is coming in 2020 and will be a mix of pop and rock.

In 2014 Cody debuted on television when he made a cameo in Instant Mom.

A year after that he was in Cougar Town where he had the role of Pete, a high school kid.

He was also on Nickelodeon that year. He was in their movie titled „One Crazy Cruise“ where he played himself, a love interest of a character called Ellie Jensen-Bauer played by Kira Kosarin.

In 2017 he had a role in a thriller movie called „The Smiley Face Killers“ where he was alongside Crispin Glover.

In 2018 he was on Broadway for the first time. He played the role of „Dmitry“, a character in a musical called „Anastasia“. His co-stars were Christy Altomare and John Bolton, among others.

In 2012 he was an ambassador for the „Build-A-Bear Workshop“.

In 2013 he became an ambassador for „Teen Cancer America“.

In 2017 he became an advocate for oceans for the UN Development program.

In August he also became an ambassador for Home Grown campaign.

In 2019 he stated that he is a part of a Trojan Swim Elite team at the University of Southern California.

He is currently also signed to a modeling agency, IMG Models.

He started dating Kylie Jenner in 2011 but their relationship was very short.

He started dating Gigi Hadid, a famous model, in 2013 but they ended their relationship in 2015.

At the end of 2019, he shared that he is currently in a relationship with Miley Cyrus.

He loves tattoos and has plenty of them. He has an anchor on one of his hands and basic elements (water, earth, sun) on his other one.

He also has „Old man river“ on one of his arms, skulls, and bones on his chest.

He also has a tattoo of Elvis Presley.

In his free time, Cody loves to surf.