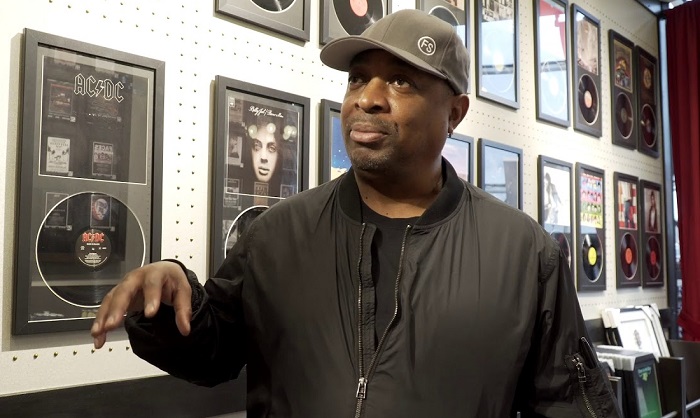 Chuck D is a really known American rapper and producer who became famous as the leader of Public Enemy, a hip hop group which integrated socially conscious lyrics into hip hop in the ’80s.

He is also known as Mista Chuck, Chuck Dangerous and the Rhyme Animal.

He was born as Carlton Douglas Ridenhour on August 1, 1960, in Queens, one of New York’s boroughs, in the United States.

He spent his childhood in Queens and started writing lyrics and rhymes in 1977.

His writing was the result of the NYC blackout which happened that year and caused the rise of the criminal activities, including looting and arson.

He is a graduate of Roosevelt High School and studied graphic design at Adelphi University.

It was at the University that he met Flavor Flav, whose real name was William Drayton. In 1984 he was one of the students who received the title of Bachelor of Fine Arts.

He was involved in hip hop all of the time he was a student. He was one of the hosts of the Super Spectrum Mix Hour radio show where he performed as Chuck D.

He was also hired a lot for making flyers for music events and he was working for the student newspaper where he drew cartoons.

He collaborated with Bill Stephney and Hank Schocklee while being on campus and they soon released their demo tape named „Public Enemy No.1.“

This tape intrigued Rick Rubin, a scout for Der Jam Records. The group had their debut with „Yo’ Bum Rush The Show” and in 1988 they have released one of the most appreciated hip-hop albums of all time.

It was named „It Takes a Nation of Millions to Hold Us Back” and it brought rap music closer to a white rock audience.

It peaked at No. 4 on US Billboard 200 chart and No.1 on Top R&B Albums. In 1992 Public Enemy released their compilation album named „Greatest Misses” which had wild reception and in 1994 „Muse Sick-n-Hour Mess Age” was released by Def Jam, with a month of delay.

In 1998 they have released a soundtrack album for a movie „He Got Game“ with Denzel Washington in the lead role and Spike Lee as the director. He was one of the contributors to „The Blues“, a music documentary from 1998.

In 1990, he was featured on a single by Sonic Youth, together with his longtime collaborator Flavor Flav. In 1993, Chuck D produced an album for Chief Groovy, Loo and the Chosen Tribe named „Got Em’ Running Scared“:

In 1996 his debut solo album was released under the name „Autobiography of Mistachuck”. He was invited to give an award for Beastie Boys at the 1998 MTV Video Music Awards.

In 1999, he launched a site Rapstation.com which included many media formats and free mp3 downloads.

He gave his voice to a character named DJ Forth Right Me in a popular video game „Grand Theft Auto: San Andreas”.

He made a collaboration with Gang G-Whiz and MC Lyte in which resulted in making music for „Dark Angel#, a cyberpunk TV series aired on Fox Channel.

He gladly agreed to make a foreword for a book titled „The Love Ethic: The Reason Why You Can’t Find and Keep Beautiful Black Love” written by the Butlers.

In 2011, he made a duo with Meat Loaf for his song „Mad Mad World/The Good God is a Woman and She Doesn’t Like Ugly”.

In 2016, Chuck D decided to join a band again. He started collaborating with Prophets of Rage, which included the lead rapper Cypress Hill and several members of a rock band named Tage Against the Machine.

Chuck D is interesting for his songwriting too because it is known that he first comes up with the name for the song after which he starts writing lyrics.

Chuck D is known as a very politically active person. He was one of the hosts of a morning show „Unfiltered“ which aired on Air America Radio.

In 2004 he was involved in a political rap convention and he claims that rap music can make a big difference in people’s lives for the better if the lyrics would be oriented more educationally and not only simplify real life.

He and Yusuf Jah have written the book „Fight the Power: Rap, Race, and Reality”.

He has his own record company named „Slam Jamz“.

He is a narrator in a film titled „Bling: Consequences and Repercussions” made by Karem Edouard.

In 2010 he released „Tear Down the Wall“ single which was his way to speak about not only the Mexican wall but all other walls in the US which divide races.

Chuck D is a member of the board of an advocacy organization settled in Washington which tries to influence the US government concerning their decisions about people in Africa, Latin America, and the Caribbean.

Chuck D appeared in a lot of series and documentaries and TV shows. He was in an episode of American animated TV series Johnny Bravo. He starred in an episode of „Aqua Teen Hunger Force“, and in Newsnight on BBC.

In 1998 he starred in a comedy movie titled „An Alan Smithee Film: Burn Hollywood Burn“.

He also appeared in a straight-to-DVD comedy „Wake Up, Ron Burgundy: The Lost Movie”.

He has a very pleasant voice so he narrated a lot of documentaries like „Quilombo Country” from 2006 and „The Rap Report – Part 2″.

In 2008 he was featured in „The Balck Candle”, a documentary about the struggles of African-Americans and the Balck Power Movement.

In 2012 he appeared in a documentary movie called „Something from Nothing: The Art of Rap“.

He worked with artists from all around the world: with a Japanese duo Boom Boom Satellites and MV Bill from Brasil on his track „Transformacao”.

In 2013 he was one of the performers on a concert which tributes the Rolling Stones.

In 2016 he was featured on ASAP Ferg’s track „Beautiful People“ from his album „Always Strive and Prosper“.

In 2018 he gave an interview for a magazine Rolling Stones where he predicts not so nice future for the US. He claims that the United States of America won’t be United in a few decades.

“Dead Presidents”, a movie about Vietnam, and “The Five Heartbeats” are his favorite movies.

The one things that can help him relax is driving and he claims that it helps him making music too.

He speaks highly of his parents who learned him humility and morality.

He has a very vegetarian diet but is also a pescetarian which means that he doesn’t eat meat but eats seafood.

He tries to lead a healthy life. He showed it in 2009 when he launched the Hip Hop Health Summit with several other artists.

He wanted the inspire and educate hip hop community about how to change life for better so you can lead a longer and more cozier life by keeping yourself healthy.

He does pilates and his trainer Kathy even invented rap pilates for him. He knows that training is as important as food.

Chuck D respects his family very much. His father Lorenzo was his role model and he loved his mum Judy.

He is married to Gaye Theresa Johnson, a professor on the UCLA. They have three daughters together.

His wife is a professor at the Department of Black Studies and they have very similar attitudes towards politics. She is also an activist and very hardworking just as Chuck D.

He doesn’t like the fact that rap became a commercial enterprise.

He has a strong opinion about known state leaders. He is not pleased with how the Israeli governments treat Palestinians and claim that it is the opposite of the firm belief that all humans are equal.

He likes to travel and he has visited 107 countries, some on vacation and some by the business.

He voted for Barack Obama and thinks he did a great job while he doesn’t like Donald Trump and thinks he is into dividing people.

He is also pointing out that women should be more in politics and other important areas of life.

He thinks that a lot of rappers think too highly of themselves and don’t try to make music which brings a message. They prefer money and fame over helping their community.