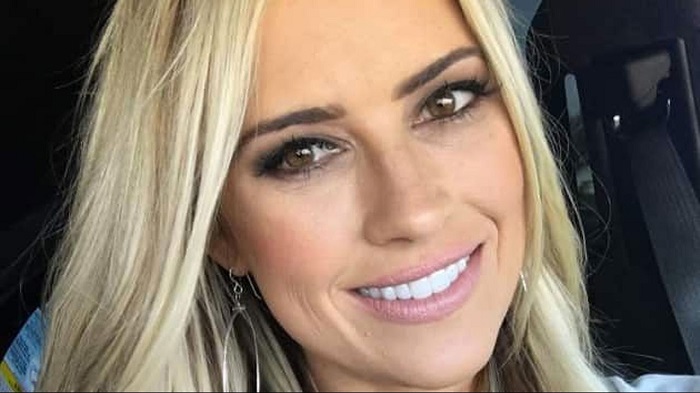 Christina El Moussa is an America TV personality, a former realtor, and model. A lot of her social life and incidents from our life are heavily publicised through the HGTV series Flip or Flop which she hosted along with her now ex-husband, Tarek El Moussa.

Her net worth has been evaluated to be somewhere around $4 million.

In this article, we will throw light on her backstory, her early life, her career, and rise to fame. We also have in stock some fun trivia and interesting facts about her personal life.

Christina El Moussa was born as Christina Meursinge Haack in Anaheim, California to her parents on July 9th, 1983. The names of her parents are unknown, but we know that she grew up in Anaheim Hills.

After she graduated college, she immediately was focused and interested in the real estate business. Christina and Tarek El Moussa (then future husband) formed a team to work actively on real estate in southern California.

Christina El Moussa is mainly famous for her reality TV show on HGTV named Flip or Flop which she hosts with her former husband, Tarek El Moussa. The show is focused on her life and her journey through joy and difficulties. The show first aired in 2013 and since then has a total of 86 episodes divided into 8 seasons.

The Flip or Flop show also covered the El Moussas’ purchase of real estate properties in Orange County and then upgrading those properties to make them eligible to fetch a profit. This stretched the extent of their real estate to Arizona and Nevada. Their first investment was of $115,000 on a property in Santa Ana.

Christina El Moussa was also a guest judge in HGTV’s Brother vs. Brother. This show was hosted by twins Jonathan Silver Scott and Drew Scott.

Christina Meursinge Haack married Tarek El Moussa married in 2009 after they met each other in college. The couple has two kids together, a beautiful daughter, Taylor was born in 2010 and son Brayden James, born in 2015.

The couple suffered complications in their second pregnancy. Christina suffered a miscarriage when she was pregnant with her second child. After several complications, she gave birth to her younger child, Brayden. She is very close to her children and focuses on spending as much time possible with them. She has also managed her work and shooting schedules around her children so that she has more time to them.

In May 2016, the Christina and Tarek announced that they are splitting up. In January 2017, they filed for divorce on mutual grounds. After they separated, there are rumors and negative thoughts towards the future of ‘El Moussa Group’ real estate. The couple is, however, co-parenting their kids with love and care in a healthy environment. The relation of the divorced couple is friendly, and there is no bad-blood amid them.

After filing divorce, Christina entered a relationship with a new person which created a buzz during one of her photoshoots. The man of the buzz is a pro-athlete and a player for Anaheim Ducks; his name is Nate Thompson (31). During her separation period from Tarek, she was involved with Gary Anderson, a contractor. She is rumored to be currently dating Doug Spedding.

Her wealth is same as her ex-husband Tarek El Moussa. She has earned big from her job as a realtor as well as a TV personality.

Christina faced the wrath of social media on Instagram where she was criticised severely after she posted a picture of her children’s play day where her daughter was supposedly wearing a two-piece bikini. She shut down the criticism like a pro by posting some on-your-face posts. She is not here to take crap from anyone.

Christina El Moussa has traveled a lot across North America to pursue her tutorial company, Success Path. It was her try to make a change and introduce the aspiring realtors to have an understanding of the field and investments.

Both Christina and Tarek El Moussa get a paycheck of around $10,000 for every episode of ‘Flip or Flop.’ This is one of the major areas of their income.

There are a lot of talks surfacing in the internet media regarding how Christina El Moussa is looking more beautiful these days. The change in her appearance has lifted the brows of her fans and followers as they are surprised with this transformation. She is rumored to have received lip fillers which have changed her distinctive wide smile. The face of the 34 years old reality star looks absolutely wrinkle-free; this has led to a common opinion that she must have received Botox injection as well.

Even though all these rumors and questions have not been officially addressed, there are more implications like how her breasts have changed shape which means that she has undergone breast augmentation surgery to receive a sexier figure.

Her second pregnancy had severe complications, and she has suffered an extended labor period and a C-section.

Christina El Moussa is an American realtor and reality TV star. She was born in Anaheim, California to her parents on July 9th, 1983. She pursued a career in real estate investment along with her ex-husband Tarek El Moussa.

After a brief glitch in her real estate career, she co-hosted a reality TV show ‘Flip or Flop’; this was her staircase to bigger success. Her net worth has been estimated to be around, $4 million.