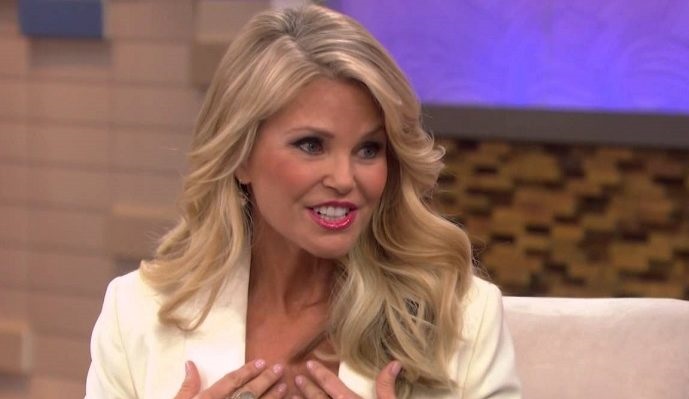 Christie Brinkley is a very beautiful and successful American actress and a model who showed off her multitalented personality by working in many fields like photography writing, designing, involving in environmental activism and more.

Christie is very successful as an entrepreneur and has a very high net worth coming nearly to $50 million. Many people don’t know that she is also a businesswoman and that she spends a lot of her time investing.

Her career started growing very rapidly and she was already a star in her twenties. She managed to keep her career as a model alive for decades and continued it with her career as a businesswoman.

She was born as Christie Lee Hudson on February 2, 1954, in a city set on the shore of Lake Erie named Monroe. She said that her childhood had marked her and left a huge impact on her life.

Monroe is located in the state of Michigan, one of the states in the USA. She was born into a loving family of her mother Marjorie and her father Herbert.

Her parent’s relationship didn’t last long so her mother got separated from her father and moved to a neighborhood located in the San Fernando Valley, near Los Angeles. It was not easy for her to move or to bring up her lovely child but she was very hard working and managed to succeed in it.

Her mother Marjorie met Donald Brinkley there and liked him very much. He was a TV writer who lived and worked in Bel Air and the two of them fell in love. She says that her parents had a very romantic story and she doesn’t understand how they grew apart so much.

Donald was a very good man and he adopted both Christie and Greg, her brother. The family started living in Malibu and later relocated to Brentwood.

Christie was talented in arts from an early age and she was a good student at Paul Revere High School she attended.

She also went to the Lycee Francais private school which was known for its bilingual classes. Christie loved France very much although she was never there she was fascinated by their art, fashion and French women. She decided to visit France as soon as possible.

She has graduated from there in 1973 and decided to move to Paris when she was only 19 because she wanted to continue her dream of studying art and living in such a special country. She said that becoming independent was one of the main things that contributed to her well-being today.

As soon as she came to Paris in 1973, she was spotted by a photographer named Errol Sawyer who noticed her beauty and possibility of her becoming a known model. Errol was mesmerized by her blonde hair and bright eyes and realized that she was a great example of American beauty.

He had made her a photo book and took her to one of the most respectable modeling agencies in Paris: Elite Model Management. Where she was introduced to P. Demarchelier and M. Reinhardt who were so excited by her looks that they sent her back to California where she was introduced by Eileen Ford from Ford Model Agency.

Eileen was also excited about Christie and has found her three campaigns to work in in the very start. She soon became a star. Christie made it to the cover of online women’s magazine titled Glamour. It all went very quick and she soon signed a contract with CoverGirl, a cosmetics brand which she liked to use very much.

Interesting enough the CoverGirl officials signed a 25-year long contract with her which was rare at that time. Getting that kind of a contract meant only that they saw a great partner in her and were sure that she will bring a huge profit to the firm.

And even after the contract was finished they have prolonged it again in 2005 is also unusual for such a big company. Today she promotes various products for mature skin for them and is very good at it.

Christie made it to the covers of Sports Illustrated Swimsuit Issue three years in a row: in 1979,1980 and 1981. This was a huge help for her career because other photographers started to notice her and other magazines became much more interested as well.

This was also a huge thing since it was the first time someone succeeded in doing it. She appeared in their first Calendar and eventually released several of her own. All of her calendars were sold in thousands of copies and she has earned a lot of money through it.

In 2005 she appeared in Sports Illustrated Issue realized for their 40th anniversary titled “Hall of Fame”. She made it again, ten years later, for their 50th Anniversary Issue, this time titled “The Legends”. She says that she was very honored and that she wanted to know if she could move even further in her career.

Christie Brinkley had a very successful modeling career and had appeared on hundreds of covers of Vogue, Cosmopolitan, Bazaar, and other notable magazines. Throughout her career, she had been featured on the covers of magazines over five hundred times.

She worked for major brands like Chanel, Max Factor, Nissan and more. This campaigns brought her huge revenues which she started investing in real estate and her own brands.

During her career, she traveled to trough forty countries so she has some great memories from these travels.

But Christie wasn’t just a model. Due to her talented personality, she was engaged in a lot of other ventures which allowed her to continue making serious money even after finishing her modeling career. She says that most of the time she just does what she feels is right, she never forced her career. Everything seemed to fall in place on its own.

In 1983 she gained her first role in an American road comedy movie titled “National Lampoon’s Vacation” with Chevy Chase and Beverly D’Angelo in lead roles. She appeared in its sequel too, in 1997 under the title “Vegas Vacation”. She considers her roles as a great experience and a way to change the usual schedule and learn something new.

In 2011 she was featured ina documentary named “King of the Hamptons” where she appeared as herself. She also appeared in a series “Mad About You” aired on NBC. She became a host of a series special called “Celebrity Weddings Instyle”.

In 1983, she made an appearance in a morning TV show called “The Today Show”, where she gave her beauty tips. In 1992 her own TV series was launched and it was named “Living in the 90’s-With Christine Brinkley”. This show was aired on CNN. Christie appeared in a lot of music videos for Billy Joel’s singles, and one in Mick Jones’s single called “Just Wanna Hold”.

Christie also played the role of Gayle Gergich in an NBC series “Parks and Recreation”. In 2011 she gained the role of Roxie Hart in a famous musical “Chicago”. She was involved in over 180 performances of the musical on Broadway.

As for business, she appeared in numerous informing commercial for Total gym, equipment for home fitness. In 2008 she was one of the promoters of National Family Fitness Day. She says that fitness is a big thing for her and that she spends a lot of time working out to maintain her looks, and that’s why she enjoys doing all of these commercials.

She has launched her own line of products called Christie Brinkley Authentic Skin Care and also ger own line of hair extensions called “Hair2Wear”.

She also created her own organic wine called “Bellissima Prosecco” and her line of eyeglasses. She also invested a lot of houses and apartments in The Hamptons.

In 1983, she wrote a book about fitness. It was named “Christine Brinkley’s Outdoor and Fitness book” which later became a bestseller. In 1989 she was featured as a doll for The Real Model Collection made by Matchbox Toys.

She also illustrated her husband’s album cover “River of Dreams” by Billy Joel. She has received an award from the Rolling Stone magazine for the Best Album Cover in 1993. In 1994 she was asked to design some sewing patterns for the Simplicity Pattern Company and a line of glasses for Nouveau Eyewear.

In 1998, Christie has released to sales her own perfume called “Believe”.

It was the same year when she entered the Playboy’s list titled “100 Sexiest Women”. She was also placed in Top 10 Supermodels Ever. In 2012 she became a co-host of a TV show called “Anderson Cooper Live” and also joined a popular dance TV show “Dancing with Stars”.

Christie was married several times and was in a few longterm relationships.

In 1973 she got married to Jean-Francais Allaux in Paris. The marriage lasted until 1981. In 1982 she started dating Oliver Chandon de Brailles but he died in 1983 in a car race.

In 1985 she got married to a known singer and musician Billy Joel. The ceremony was held on a yacht and it was 2nd marriage for Christie and Billy. The two divorced sharing custody over their daughter Alexa Ray Joel. She was born in 1985 and has a career of a singer and pianist.

Her third marriage was to Richard Taubman, a businessman who worked with real estates. They got married soon, in 1994, and got divorced quickly in 1995. They have a son together named Jack Paris Brinkley Taubman. In 1996 she got married to Peter Cook, a known architect.

Their daughter Sailor Lee Brinkley Cook was born in 1998. She is also a model. Christie and Peter divorced in 2008. Christie is known for her philanthropism and involvement into animal rights defending. She is a member of PETA. She became a vegetarian very early, at the age of 13.

In 2015 she has met John  Mellencamp, a musician and an actor with whom she still has a romantic relationship.