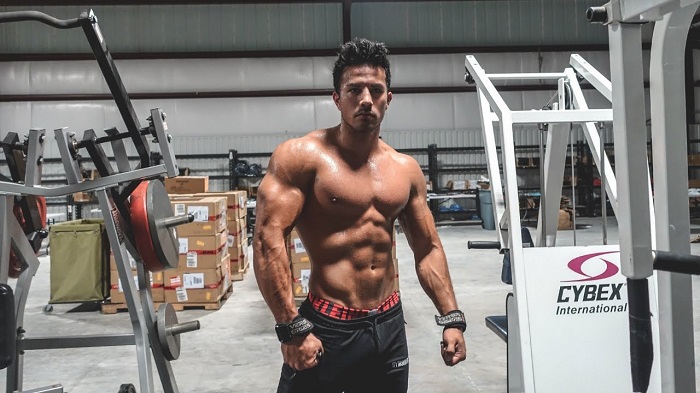 Christian Guzman is a fitness coach, personal trainer and model who got famous through his YouTube channel where he posted fitness tutorials and tips. After the Channel got popular, Christian used it to develop a clothing and fitness brand called Alphalete Athletics.

Guzman’s channel has 730 thousand subscribers and almost 150 million views. Find out how the 24-year-old made it to the fitness top and became a millionaire, along with the most interesting details like his workout routine, diet, personal life and social networks.

Christian was born in Texas, USA on the 20th of February 1993. He was a skinny kid growing up and didn’t do any sports, but played a guitar. While in high school he started training with friends and fell in love with weight lifting.

Guzman soon started working at a gym. After seeing other fitness trainer workouts online, he decided to post his own fitness tips.

As he was getting more involved in fitness, Christian followed other bodybuilders for inspiration, looking to learn more about fitness and ultimately create good physique.

He learned the most from the tips and tricks of Matt Ogus and Scott Herman, at the time popular fitness gurus. He took his time and slowly advanced. As his body started to change Guzman ordered a video camera, and began documenting his journey through fitness.

Christian soon became confident about his physique enough to start publishing his videos. He started his YouTube channel in March 2012.

Christian Guzman published videos about his nutrition tips and training that caught a lot of attention. The audience liked his natural fitness tips and real-life videos, so the number of followers grew.

In the course of time Guzman has built a name in the fitness world. He now owns a gym in Houston and a successful clothing and fitness brand called Alphalete Athletics.

Christian has made it all big because he spices the fitness videos with information about his personal life.

Christian has a younger brother named Ivan. He is pretty close to his family often posting pictures of them together. His mother has been struggling with cancer for some time, and Christian shared it with his social networks.

Guzman is in a relationship with Heidi Somers known on YouTube as Buff Bunny since the beginning of 2017. Before Heidi, he dated YouTuber and fitness coach Nikki Blackketter for three years, but they broke up at the end 2016.

The entrepreneur Christian Guzman has a net worth of $1.3 million, in the major part acquired not from his YouTube channel, but from other business deals.

In fact, Christian uses his popularity on YouTube and social networks as marketing tool for the promotion of his brand Alphalete Athletics, that drives the majority of his income.

Before fame Christian dreamed of holding fitness training classes for kids. He thought of opening a small space to fulfill the dream, but his YouTube success amplified everything.

Christian Guzman eats many small meals during the day to stay fit and healthy. His meals contain of vegetables, whole grains and lean proteins. He eats as many as nine times a day.

Guzman presents himself as a natural bodybuilder that achieves his physique by exercises and healthy lifestyle without the use of any steroids or other similar artificial substances. The truthfulness of that claim is constantly debated by his fans and foes.

His current girlfriend Heidi Somers is four years his senior and she used to be friend with Christian’s ex-girlfriend Nikki Blackketter.

Guzman left Blackketter after she allegedly cheated him with his friend. They were together for about three years including two breakups that occurred during 2016. While they were together, Christian and Nikki bought a house in Huston. Nikki was heavily involved not just in Christian’s private life but also in his business, helping him with Alphalete Athletics.

Christian Guzman is a fitness trainer, model and YouTube star who got famous through posting fitness tutorials and tips on YouTube and documenting his own fitness transformation from a skinny boy to a perfectly built muscular young man.

He uses his social networks profiles to promote his clothing and workout brand Alphalete Athletics in the process earning a net worth of $1.3 million.