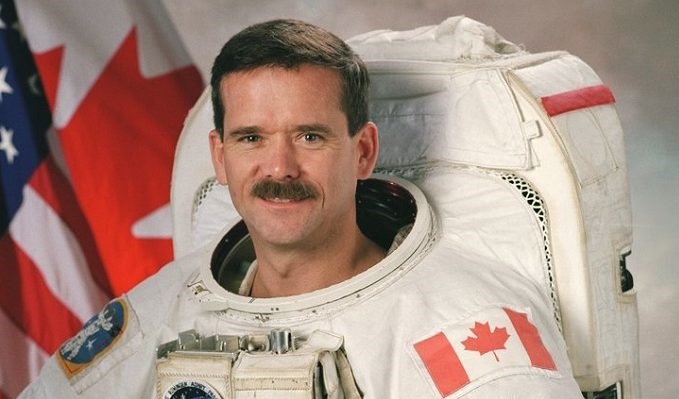 Chris Hadfield is a known Canadian former astronaut and an engineer who also had a very respectable career as a pilot for the Canadian Air Force.

He will always stay an important figure in Canadian history since he is the first Canadian to walk in space.

He is one of the most respectable Canadian pilots and a role model for a loto f young men who want to follow his brave footsteps and become pilots and astronauts.

Chris is also a very positive person who likes to have strong contact with the public so he is often a guest of various shows, holds many interviews and is very active on social media.

He was born as Chris Austin Hadfield on August 29, 1959, in the largest city settled on Lake Huron in Southwest Ontario called Sarnia.

He grew up in southern Ontario with a family working on a corn farm. His parents were gentle and hardworking people who wanted their children to be well educated and follow their dreams.

Chris dreamed about being an astronaut from a very early age and his desire was so strong that he eventually succeeded in becoming one.

His first encounter with space and astronauts was when he was only nine years old. He witnessed the Apollo 11 launching on the Moon and it was extremely exciting for him to see it. He started dreaming about becoming an astronaut after that and he has spoken about it for days.

His parents witnessed his excitement and later encouraged him in anything he wanted in order to fulfill his dream.

He was very close to his brother ever since growing up together, and the two of them shared a similar adventure spirit. His brother later also became a pilot.

Chris was a student at White Oaks Secondary School in the town of Oakville, located in Ontario. He graduated from Milton High School and was always a very good student, especially interested in everything connected to engineering.

During his time in high school, he joined the Royal Canadian Air Cadets following his dream to become a pilot or an astronaut. He received a scholarship when he was 15 and went his way to become a pilot and gained another one at the age of 16 due to his great accomplishments on that field.

He graduated in1978 after which he became a member of the Canadian Armed Forces. He enrolled the Royal Military College and gained himself a degree of a mechanical engineer. It was in 1982.

He was very proud of his success, and so was his family. His teachers and professors later described him as a very focused student which showed even then signs of a great man.

After finishing college he entered flight training and became the best pilot in a known Canadian Forces base called Moose Jaw. He became one of their best pilots during the training.

He continued his training to become a fighter pilot and after finishing it he became a pilot of CF-18 Hornets as a member of Tactical Fighter Squadron. He also became known for his interception of a Soviet bomber in the Canadian Arctic since he was the first to do it in Canada.

Chris wasn’t afraid of doing anything while piloting so his supervisors appreciated him because he could be always relied on.

He continued his training at Edwards Air Force Base where he attended a pilot school held by US Air Force. From 1989 until 1992 he was involved in several missions which showed his pilot skills: from testing new Hornet aircraft, working with NASA, piloting new Aerospace Planes and developing test programs.

He excelled in all of his assignments. In 1992 he received a masters degree from the University of Tennesse Space Institute in the field of aviation systems. This degree brought him a chance to continue his work in more serious fields, like for space agencies.

In the summer of 1992, he was chosen as a new Canadian astronaut amongst thousands of applicants and he started working for CSA, Canadian Space Agency. He was given responsible jobs like developing glass for cockpits, supporting various shuttle launches and voicing mission control in 25 Shuttle missions becoming the voice for the astronauts.

He became the chief astronaut for the Canadian Space Agency and stayed in that position in the period from 1996 to 2000.

From 2001 to 2003 he was the Operating Director of NASA in a Russian Training Center named Yuri Gagarin Cosmonauts Training Center. He was very good in maintaining solid relations with other nations space agency, including the Russians with whom NASA often collaborated with.

His first trip to space was in 1995 as a member of the crew of Space Shuttle Atlantis which flew to meet the Russian Space Station Mir to transfer them food, water, and supplies. Then he became the first Canadian to board the Russian “Mir”.

His second trip was in 2001 as a member of a crew of the Space Shuttle Endeavor who installed a robotic arm made in Canada called Canadarm2. He became the first Canadian who freely floated in space during this mission. nd he also performed hours of spacewalk during the mission.

He co-ordinated all crew activities in their International Space Station located in Russia and supervised crew training. He was also the chief negotiator with the Russian Space Agency.

But he also trained and finished his training as a cosmonaut engineer in the Russian Soyuz spacecraft wearing Russian spacesuits. He even finished training wearing the Russian Cosmonaut suit.

In 2003 he retired from the CAF with ranks of a colonel. He retired after 25 years of military service at Canadian Armed Forced. From 2003 to 2006 he served as chief of Robotics in NASA’s center in Houston. From 2006 to 2008 he was the chief of ISSO, which was a very prestigious workplace.

In 2008 he started training with Bob Thirsk as his back-up for mission Expedition 21. He also worked in the Aquarius underwater laboratory as a member of their NEEMO 14 mission. This means that he had to spend a fortnight living and working underwater without going to the surface.

In 2010 he was honored to become the first Canadian commander who will lead Expedition 35 mission for NASA in Winter of 2012. He stayed in space for 5 months, until May 2013. this was a huge thing for him and Canada since he was the first Canadian to run that kind of a mission.

After this 3rd trip into space, he retired from the Canadian Space Agency in the summer of 2013. He expressed his wish to return home to Canada after working most of his life in the United States.

Hadfield is very present on social media and has over 2 million followers on his Twitter account. He is very active on Reddit but also on Facebook and YouTube. He is a good friend with Star Trek Actors, especially with William Shatner. His son Evan helps him in managing his social media activities.

He is also a big fan of music and knows how to play the guitar. He recorded music while being on Expedition 35 and this song named “Jewel in the Night” was released on Youtube on Christmas. This was an extremely good advertisement both for him and for the space agency because it showed that working as an astronaut and bring something special to everyone and it was something that is never forgotten.

He also appeared on his brother’s albums. His brother David is also a big adventurer, pilot, and a sailor and is very close to him.

In 2015 he released his album titled “Space Sessions: Song from a Tin Can” which was recorded while he was on ISS. The album was a huge hit and brought more attention to Chris.

He became a professor of aviation programs at the University of Waterloo in 2013.

It was the same year his autobiography was released. It was titled “An Astronaut’s Guide To Life On Earth”. The book was a NY Times bestseller and also a big bestseller in his home country Canada.

In 2017 he was a host of BBC TV show named “Astronauts; Do You Have What It Takes?”. The show included 12 contestants who tried to prove him and his co-host Kevin Fong that they have what it takes to be an astronaut. It contained tasks which were similar to the ones astronauts must go through while in space.

He received numerous honors and awards during his career. From various Orders and Medals to Meritorious Service Crosses. In 2005 he became a member of Canada’s Aviation Hall of Fame. He received an honorary Doctorate of Engineering from Royal Military College.

In 1997 his hometown Sarnia’s airport was given the name “Sarnia Chris Hadfield Airport” to honor his great career and attract visitors who want to see his hometown.

One asteroid was also named after him: 14143 Hadfield by the Space Agency.

In 2014 Wall of honor of the Royal Military College in Kingston gained one more name on it: Chris Hadfield.

Chris is still married to his high school sweetheart Helene and they have three kids together.

They have a very stable marriage which was never threatened by his absence.

When he retired the family decided to go back to Canada because he has promised it to his wife who was very homesick.

He has a daughter Kristin and two sons: Kyle and Evan with whom he has an excellent relationship.