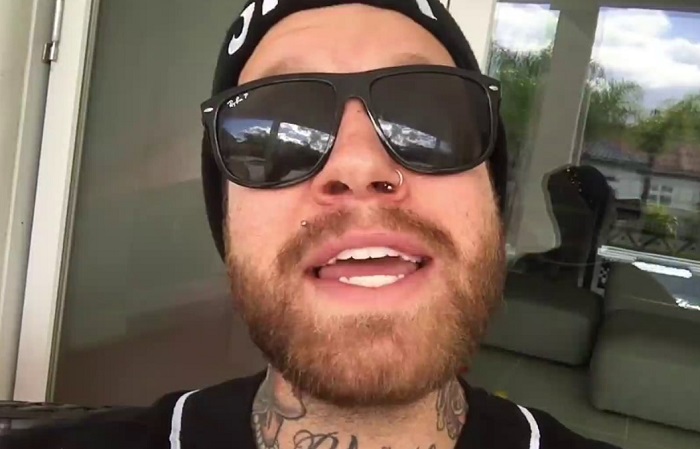 Chris Fronzak, often called Fronz (or in his hip hop career he is Fronzilla) is a young American singer and a rapper who gained fame through his work with a metalcore band called Atilla.

He also released his hip hop solo album because he is very versatile.

He was born as Christopher Joseph Fronzak on November 20, 1989, in one of the most prominent cities in Georgia called Atlanta. It is the capital of the state and the most populated place in the state.

He showed interest in music from his young age and was always interested in rock and metal music.

He learned to play the guitar at the age of 12 and hasn’t left it since. Singing was also one of his biggest passions but he was never understood enough due to the choice of the genre he had.

He enrolled in one of the high schools in Atlanta and as early as his freshman class he formed a band. He did it with his new high school friends called Sean, Sam, Matt, and Kris.

Fronzak was the one to came up with the name for the band Atilla, based on the character of Atilla the Hun about whom he found out through books. He knew that the name of such a huge tyrant from the past would be easy to remember.

The band was formed in 2005 in Atlanta and started working very seriously on their demo tape. After it was finished the band self-released their demo tape and name it “Fallacy”. It was released through Statik Factory.

The band was soon recognized as promising and was invited to tour with several notable metal bands like Chelsea Grin, Arsonist Get All The Girls and American Me.

In 2006, Chris appeared in the MTV reality series “Made”. This popular series was aired from 2002 to 2014 and is described as a self-improvement reality TV show.

They also toured with Threat Signal in the spring of 2008.

It was in 2010 that Fronzak and his band signed a contract with Artery Recordings. They soon released their first major-label album titled “Rage”. Stephan Hawkes produced almost all the songs on the album.

They were invited to join the Drop Dead Gorgeous tour a few months after. At the end of the summer, Fronzak and his band started as opening acts for Stick to Your Guns Tour.

Their 4th album came out in the summer of 2011 and was named Outlawed. It entered the Billboard 200 chart. At the same time, the band started touring with Asking Alexandria.

That year the band supported We Came As Romans, Chelsea Grin, Vanna, Volumes and more.

In 2012 the band was scheduled to play in Canada but Fronzak couldn’t enter into the country due to the felony he committed in the past and the band eventually did not enter Canada or cross the border.

In the summer of 2012, the Atilla’s bassist Chris Camrie left the band and was replaced by Kalan Blehm.

Fronzak did some solo work while being in the band. He appeared on songs from the groups like “From the Embrace”, “In Dying Arms” and “Issues”.

He also collaborated with “Upon a Burning Body”, “Sleeping With Sirens” and “We Are The Blog!”

In 2013 he released his solo single called “Turn It Up”. The song was made in the hip hop genre and he released it as Fronzilla. His solo debut album was released in 2015 under the name “People’s Anthem”.

In 2014 he created his own record label called “Stay Sick Recordings”. The label released albums of metalcore bands like “The Plot in You” and “It Lives It Breaths”.

In 2013 Chris and his band Atilla released their new album “About That Life” with “Middle Fingers Up” as the lead single from this album. The band also went on the road, on their “About That Life”.

The band also played on the 2014 Warped Tour through the United States and Canada. They were also the headline band for Monster Outbreak Tour.

In 2016 they went on a Europe Tour with Hollywood Undead.

In 2014 their new album was released under the name “Guilty Pleasure”. The band was very pleased with this album and Fronzak referred to it as their heaviest album ever.

Their guitarist Nate Salameh left the band that year, mostly because he was tired of traveling and drug and alcohol abuse.

In 2016 Atilla signed to SharpTone Records and released their new project “Caos”.

In 2017 Sean Heenan left the band. Atila announced his departure and explained that it was a choice of all other members and that Sean didn’t make a big deal out of it.

In February 2018 they didn’t re-sign their contract with SharpTone Records.

Their new single “Pizza” was released in the summer of the same year.

Their last album is named “Villain” and it was self-released by Chris and the band in February 2019. It charted on No.7 on US Top Hard Rock Albums.

He is also an owner of StaySickThreads merchandise business where his fans can buy shirts, track shorts, caps and more.

As for his personal life, Chris is known as a very temperament person who openly speaks his mind so he was involved in several controversies during his career.

In 2014 he was attacked by Buddy Nielsen, the singer of “Senseless Fail”. The reason was Atilla’s song titled “Proving Grounds” which was considered to be made as an insult to the LGBT community.

In 2013 Atilla released their first diss track “Callout” in which the band spoke against several persons like Ronnie Radke and Jonny Craig.

Their next diss track was released in 2018 under the name “Callout 2” and it dissed Logan Paul, Offset, Jeffree Star and more. This track caused huge reactions online.

He also attacked a security guard at his own concert because he witnessed the guard attacking his fans.

After his performance in Denver in summer 2015, he was almost arrested by the cops for “inciting a riot”. That is why he stopped his performance and ran away from the event.

The reasons lie in the fact that he encouraged the crowd to go wild and some of them were injured during that event.

He is very close to a beautiful young woman called Demerie Leigh, an artist with whom he has a lot of together photos on Instagram.

Earlier he was in a longtime relationship with his girlfriend named Victoria Snooks but they separated after several years being together.

They have two children together, sons named Blaise and Lord. He has their names tattooed on his chest and neck.

He also has an eagle tattooed on his shoulder. He said that this animal inspires him very much and that he loves the beauty of wildlife.

Chris is a huge lover of tattoos and has tens of them on his body. He has tattoo sleeves. He tattooed the word MANIFEST on his right cheek below his eye.

He is a fan of old-fashioned drinks and often drinks Manhattan. He says that he wants to spend more time relaxing and enjoying life now that he entered a certain age.

Chris lives in the town of Orlando in Florida.

His net worth is estimated at approximately $ 6-7 million.

He is also a fan of fast cars so he is a proud owner of GT3RS. He says that if he could, he would buy all of them.

He is so popular in Russia that a graffiti artist made his extra big portrait on a city wall.