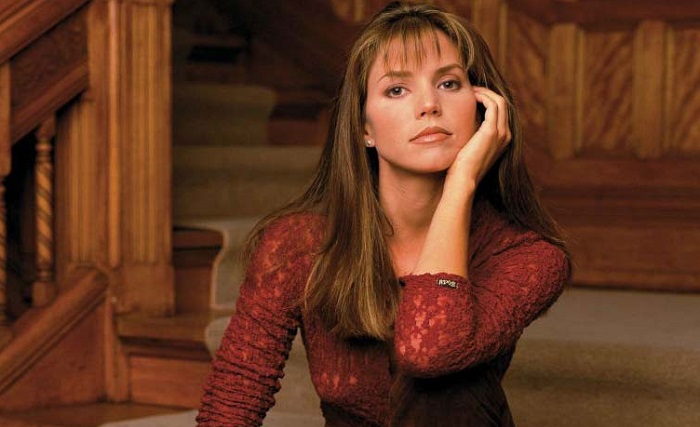 Charisma Carpenter is a very beautiful American actress who gained recognition for her roles in „Buffy the Vampire Slayer“ and „Angel“.

These two series were huge hits at that time and Charisma has gathered a huge fanbase.

She has also starred in several movies like „The Expendables“ and “Psychosis” and one of her recent works is in a movie titled „Pegasus: Pony with a Broken Wing“.

She was born as Charisma Carpenter on July 23, 1970, in the city of Las Vegas, located in the state of Nevada, in the United States.

She grew up in a middle-class family, raised by her mother Christine and her father Don.

Charisma has ancestors from Europe and is of Spanish, German and French ancestry.

Charisma was a student at Bishop Gorman High School in her hometown. She gained interest in entertainment as a young girl so she soon became a member of a dance troupe.

In her young teenage years, her family decided to move to Rosarito Beach in Mexico but later moved to the town of San Diego in California.

She liked it there and had a great time at Bonita Vista High School. Bonita is a big suburb of San Diego.

She is very beautiful so it is no wonder that she was a contest at many local beauty contests where she won several prizes.

Her graduation was in 1988, and she graduated from Chula Vista School of Creative and Performing Arts.

During the time she was a high school student she was also a cheerleader.

After graduation Charisma decided to take a short period for herself and not start to work at once. She decided to go on a trip to Europe and she had visited almost all the bigger European countries.

After returning home she worked at many jobs. She was an instructor of aerobics, a clerk in a video store and even worked in the property business.

She was a huge fan of sports and cheerleading so she worked as a cheerleader in the city’s football team called San Diego Chargers.

Since she was not satisfied with her career and life in San Diego she decided to move to Los Angeles.

One of the reasons for her leaving San Diego was the fact that she suffered a huge trauma in 1991 when she and her friends were attacked by a serial rapist and held by gunpoint.

Her friends were even shot during the struggle with the rapist but the wounds weren’t serious. She helped the police to catch the attacker and gave them a crucial piece of evidence against him.

After relocating to Los Angeles she decided to start working as a waitress where she was noticed by a commercial agent.

He managed to gain her many commercial gigs and she became enrolled in theatrical productions.

Charisma gained several roles in theater productions too. Some of them are “No, No, Nanette” and “Welcome Home, Soldier.”

In 1994 she appeared in a TV series „Baywatch“ which was her first TV role.

Aaron Spelling, a famous series producer, liked her very much so he invited her to his new project: “Malibu Shores”.

Just a while after, she gained her first role in a soap opera called „Malibu Shores“ which aired on NBC. The series aired for only one season and ten episodes were filmed. She starred alongside Kerri Russell and Tony Lucca.

In 1996 she went on an audition for a TV series „Buffy the Vampire Slayer“ and wanted to get the lead role.

Instead, she gained the role of Cordelia Chase in the series. She was cast in the series for three seasons and eventually played the same character of Cordelia in the four seasons of „Angel“.

The series was a huge hit and was filmed in seven seasons. Her character Cordelia was a character of a stuck up student but she was very popular amongst the viewers.

In 2004, she guest appeared in a supernatural drama series titled „Charmed“ where she had the role of a human demon named Kyra. The critics praised her role and noted that she has been given to little material and that she should have been given more space in the series.

„Miss Match“ is another comedy-drama series she starred the same year.

In the 2005/06 season of „Veronica Mars”, she played the role of Kendall Casablancas in it. Charisma also guested in a comedy series named „Greek“ and in „Back to You“ series aired on Fox.

In 2006 she starred in two movies: „Flirting with Danger“ and „Cheaters’ Club“.

In 2008 she was the lead host of „Buffy the Vampire Slayer“ reunion.

In 2009 she appeared in CSI for the first time. She appeared in an episode titled “Descent of Men” where she had the role of a skydiver Mink.

In the same year, she was given the lead role of a psychic in a horror sci-fi movie named ” House of Bones” which was released on DVD. The movie was directed by Jeffrey Scot Land and the second lead role was given to Corin Nemec.

In 2010 she appeared in a horror thriller “Vivid”, which was the first movie made by the UK production house Red Sparrow.

It was filmed with a budget of $1.2 million and directed by Reg Traviss. She was cast in the movie with Ricci Harnett and Justin Hawkins.

She had many roles in TV movies like a comedy „What Boys Like”, the romantic movie „See Jane Date” and a horror movie „Voodoo Moon”.

In 2010 she appeared in „The Expendables” with Sylvester Stallone and was praised for her role. It brought her a role in „Human Factor” and „Crash Site”.

In 2012 she played the role of Rebecca Sewell in the series „Lying Game” which airs on ABC and continued it in the 2nd season.

Her next role was in „The Expendables 2“. She said that it’s always interesting to work with famous people and big stars because they have a lot of great advice to give and they are very interested in teaching the younger ones.

In 2013 she started hosting the „Surviving Evil” series on Investigation Discovery.

She had the lead role in a TV movie „Mommy’s Secret“. This was quite a movie and was pretty popular at the time.

In 2004 she appeared on the cover of Playboy magazine and in its nude layout. It was just a year later after she gave birth to her son and she feels that it helped her raise her self-esteem as nothing else could.

In 2002 she got married to Damian Hardy (the prenuptial agreement was included) and in 2003 her first son Donovan Charles Hardy was born.

They were married in the city of Las Vegas, located in the state of Nevada, in the United States.

They divorced in 2008 and the former partners agreed on the sharing of custody for their son. This was a very hard period for them but they grew over it quite quickly because of the kid.

Their divorce wasn’t easily settled although they had a prenup. It was because Charisma wanted Donovan to pay the divorce expenses because she had no work at that time due to the Writers Guild of America strike which left her unemployed.

He worked as a hotel bellman and supervisor and earned less than her so he considered it to be unfair.

As for her diet, she likes to eat healthy food and one of her favorite meals includes homemade cottage cheese.

She keeps her fit by playing tennis and she often says that in another life she might have been a professional tennis player.

She says that sport is her passion and that she loves a good match to get her energy out and calm herself.