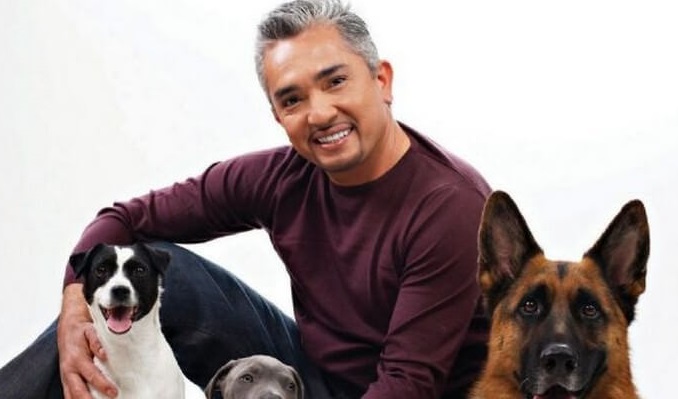 Cesar Millan is one of America’s biggest stars and has been a reality TV person for a long time now. He is of American and Mexican descent and he got famous because he is a dog trainer that also goes by „dog whisperer“.

His show Dog Whisperer with Cesar Millan has gotten a few important award nominations, as well as an Emmy nomination.

He has worked on the show for 8 years between 2004 and 2012, and people in over 80 different states have seen it all over the world.

He is also a very popular writer and has created products for pets as well.

After being in the popular series, he has worked with aggressive dogs and he owns a Psychology Center for dogs that opened in 2002 and closed in 2008. It was in Los Angeles.

His first three books were best sellers and he sold over 2 million pieces! He said that he never thought that he would be such a popular guy.

His first wife used to be a partner in the Millan Foundation project, which later changed names to the Cesar Millan PACK Project because the two of them split and there was a need for separation.

This was a place where dogs who get abandoned could get the proper care they needed.

Cesar Millan’s full name is Cesar Felipe Millan Favela and he was born on August 27th in the year 1969.

He was born in a very small place called Culiacan in Sinaloa. This is a place in Mexico. His parents are called Felipe Millan Guillen and Maria Teresa Favela.

Since he was very young, he had a connection to animals. He grew up on a farm and his grandfather was a really good farmer. Cesar had some chores that included animals and that’s one of the reasons why he became very good with them later.

Even at this age, many would call him el Perrero, or „the one who attracts dogs“. His family had to move into Mazatlan later, but Cesar wanted the American dream for himself.

At the age of 21, he crossed the US border with no papers and he only had 100 dollars with him. He didn’t know any English and he knew how hard it was going to be to blend in.

He later spoke about his life as someone who had absolutely no bad intentions – he said he was still afraid for his life at the time when he had to be on the streets because the cases of people being taken while sleeping and getting organs taken out are huge!

He was very thankful for meeting Jada Pinkett Smith. He says that he is the reason why he succeeded! He told her about her dreams and she got him an English tutor! Because of this knowledge that he got, he soon became one of the people who seemed to „blend in“ much better.

His career started when he worked in a dog grooming business in America.

He wanted to work in the niche, but people there treated him badly because of his descent.

Next, he created a business called Pacific Point Canine Academy.

One of the first people to come in and support him was Jada again and she was advocating for him while he was a limo driver.

Later in his career, Millan created the Dog Psychology Center. This was in LA and it was a place where you could bring dogs that are of bigger breeds and he would work with them to train them and help the owners overcome a certain difficulty.

In the year 2002, he got small articles in Los Angeles Times and a loto f entertainment companies found out about him and they wanted him to have a show on their channel.

The result of this was the very popular show he had, called the Dog Whisperer.

The show is about Cesar as he was working with dogs and it premiered on National Geographic TV channel.

Later, as things changed, it moved o Nat Geo WILD. It was actually the number 1 most-watched thing on the channel for a very long time and that’s why it was renewed for 8 seasons!

The final episode was in September of 2012. Cesar later admitted that it’s harder to work with dogs when they’re in front of a camera because most of them have a fear of the things that are unknown to them and cameras are one of those.

In 2009, he started his own magazine called Cesar’s Way and it was available to buy both in America and in Canada. He created it to get people to know all about their relationship with their dog and how they can make it better.

He shared tips and tricks about training and that’s one of the reasons why people bought it.

All of these aired on Nat Geo WILD. This channel supported him from the very beginning and he was very thankful because they let him be a guest there again after some time.

Later he created Mutt & Stuff, which was a show on Nickelodeon and it was for kids. His kid was in there and his older kid also used to act, but not here.

There are famous lectures that he does and they are called Cesar Millan Live! These are just his lectures where he teaches about dog training live.

He explains people the philosophy that supports his work and then he shows them how it is supposed to bed one.

He says that Americans tend to give them affection, but no exercise or discipline. This creates the wrong image for the dog – he should see you as a leader of the pack, not the person who will feed him and give him a home for free, this makes them take advantage of you.

Millan says that our body language triggers dogs a lot and that we need to be more mindful o fit. People who train dogs don’t seem to understand this and they focus only on their words, while their bodies are saying something else. Even when we’re not training them, the dogs are watching us all of the time.

On the TV, Millan demonstrates these methods and the ways that he uses the „tech“ noise and gesticulations in order to communicate with the dog on more than one level.

He claims that each dog understands sounds differently and that we need to follow their directions in order to see what will work for them.

In 2009, he said that his success can be thanked by his balanced personality – since dogs can sense if you’re different and if you’re maybe unhappy or aggressive.

There have been a lot of critics on his work, especially in the beginning. In Current Science, an Indian magazine and science research business, they said that he uses inhumane ways to train dogs and that the „calm submission“ he uses actually makes the dogs feel absolutely terrified and helpless, which affects their confidence a lot.

There were also critics that said that all of his episodes on the show are highly edited and that that’s nowhere near similar to what he does to the dogs in real life.

In 2012, Cesar was on The Alan Titchmarsh Show and the host called his work very weird. He said that what he does is cruel. He said that Millan punched a dog n the throat. Cesar said that it was not a punch, but a touch that lets them know that we also have a force.

In 2000, he finally became a resident of the USA and he was very happy about this since this was his dream for a very long time and he finally made it.

He lives in Los Angeles now and he says that he absolutely in love with his living place.

In 2010, his dog Daddy died and he learned that his wife wants a divorce. He says that he was shocked by all of this and that this hit him really hard and because of that he wanted to kill himself.

In June of the same year, his wife Ilusion Millan filed the papers and started to divorce.

Only two months later, he started to date Jahira Dar. She is a TV person, an actress and she used to work as a stylist. They started their engagement in 2016.

Millan’s first dog was called Daddy and he was an American Pit Bull Terrier. He is the reason why he started the show.

Later he got another dog, Junior and he was the same type of dog. This dog also helped Cesar do group therapy and after he died, Junior stepped into Daddy’s place.

He was also in the show Ghost Whisperer where he helped the protagonist communicate with a dog that was kept between the light and the physical world.

His character ha also appeared in South Park and he said that he was actually really liking the episode, no matter the fact that it was actually all joke and satire.

In an episode of Bones, he played himself and helped the group find out whether a certain location was used for dog fights. He was also in Beethoven’s Big Break, Jeopardy, and even in Hell’s Kitchen.

Some of these were movies and series where he acted like himself, while others are those in which he only made a cameo.

He now has to pay his wife money because they are divorced, but he says that this is not a problem for him and that he still loves her very much and is ready to give her everything she needs to live a comfortable life.

Many hosts have asked him about his methods and they wanted to know what he thinks about them and whether he is unsure of them sometimes.

Millan says that he is constantly working on his methods because he wants to be the best dog trainer out there, but he makes mistakes, just like anyone else.

There are rumors that he has some serious plans with his current girlfriend, but many people claim that he is still in love with his ex-wife and that that is the reason why none of this can happen.