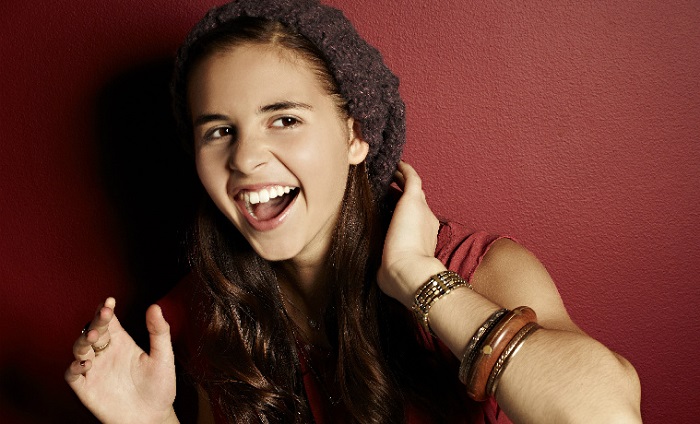 Carly Rose Sonenclar is an American singer and an actress who became known after her performance in 2012 on “The X Factor”.

She was born on April 20, 1999 in New York City. She has an older brother Russell who always took care about her and kept her safe.

Her first singing videos were made when she was just a little girl, at the age of two, so it is clear that she loved music since she was born.

Her parents recorded her when she was trying to sing songs from a popular American TV series called “American Idol”.

Parents also noticed that she has a singing and dancing talent so she took a lot of classes connected with those arts: singing, dancing, acting, and through that period she learned to play the piano.

One of her teacher, who thought she was especially talented, connected her to a talent agency in New York and she signed her first contract with that agency. It was one of the biggest children’s management companies in New York called “Cunningham, Escott, Slevin and Doherty”.

Her first big performance in front of the public was in 2006 at The New York Music Theatre Festival where she was given a great leadung role in “The Night of the Hunter” musical.

After she proved her talent, she was called to act and sing in her first Broadway show in “Les Miserables”.

Three years later, in 2009, she appeared in the musical of one of the most popular series in US ever: “Little House on the Prairie”.

Sesame Workshop produced a series “The Electric Company” and Carly Rose had her TV debut in it. In 2011 she was back on Broadway with a role in the musical “Wonderland”. She got good reviews from “The New York Times” in that period of her work.

A website called broadwayworld.com named her to be “The Best Young Performer” in 2011.

The same year she had another role in “The Big Bank” which was also a musical.

She was a cast member in two movies: in “The Nanny Diaries” and in “The Sisterhood of Travelling Pants 2”.

In 2012 she went to an audition on “The X Factor USA” where she stood out with her performance and left the judges breathless. He gained great critics from all of them.

She was chosen to be one of the contesters who had a chance to perform at judge’s houses. In the end she joined the Top 10 contestors.

She later advanced to Top 8, Top 5 and ultimately she came to the Finale round. She finished second at the end of “The X Factor”.

In 2013 she released her own single “Unforgettable” and she was later goven a chance to perform at Teddy Stadium in Jerusalem.

In 2013 she was called to perform at “Stand Up for a Cure” concert in Times Square.

She acted in the 15th season of “Law & Order: Special Victims Unit”.

In 2014 she continued her education in a public school which was her desire and decision.

She had a concert in Pomona in New York in 2014 where she performed all of her hits.

Today she is working in some new materials and is signed to Columbia Records.

Carly Rose is Jewish so she was very proud to have a concert in Jerusalem.

She is very close to her brother Russell who graduated from University of Delaware.

Today she lives in Mamaroneck in New York.

She is a big fan of softball and she tries to play it whenever she can.

She is an ambassador of “The Starlight Children Foundation”.

Carly is a huge fan of Harry Styles and Channing Tatum.

Her favorite singer is Bruno Mars and her favorite band is “The Black Eyed Peas”.

Carly Rose Sonenclar is a known American singer who got more famous through US after her appearance in “The X Factor”.