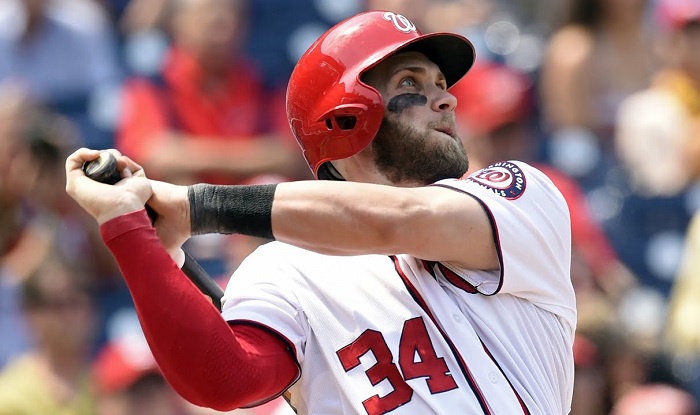 It is said that Bryce Harper is one of the most interesting players in baseball now – this means that he will get serious cash along the way.

He is just 27 years old, a teen phenomenon who can really make up the potential that he has clearly; he has already made some money, but the endorsements are just kept coming on his way, and he uses them in the best way possible.

Harpers is a true baseball superstar – his Net Worth is around 25 million dollars, most of which comes from his time spent with the Nationals on his rookie deal.

Bryce Aron Max Harper is a very famous professional baseball right fielder who plays for the Philadelphia Phillies of Major League Baseball (MLB) and for a long time he has been considered a true baseball prodigy.

From 2012 till 2018 he has played for the Washington Nationals, and he is often referred as a “five-tool player”.

Bryce finished high school early so that he enrol the College of Southern Nevada. There he has won the 2010 Golden Spikes Award, and he was selected as the first overall pick in the 2010 MLB Draft.

All of this time, Bryce has been connected to his religious side and often spoke about the guidelines that he follows and that he wants others to follow also, especially, those who are young.

This is his story.

His father name is Ron, and his mother name is Sherilyn  – they lived in Las Vegas. Ron has worked as an ironworker, and Bryce often attributes his work ethic to the lessons he received from watching his dad.

Harper once said that he wanted to work hard cause he has seen his dad work so hard for 25 years.

The Harper brothers are very close, and when they have not to spend any time together, they have spoken on the phone consistently.

Bryce went to Las Vegas High School in Las Vegas, Nevada, and Sports Illustrated run the story in 2009 about Harper, where they compared him withed with LeBron James.

Harper played alongside Joey Gallo and Kris Bryant when he was in youth.

Following his sophomore year,  in October 2009, Harper earned his General Educational Development, and in June 2010, he becomes eligible for the Major League Baseball draft held. He was such a talent that he had to start his professional career early.

17-year-old Harper, in that year, registered in the National Junior College Athletic Association (NJCAA) at the College of Southern Nevada. There he played in the position of the catcher.

He has an older brother, and his name is Bryan – they are really close, they have been teammates at Las Vegas High School. Bryan was one of the Southern Nevada Coyotes’ starting pitchers.

In 2010 – in the Western district finals of the NJCAA World Series, he went 6-for-7 with five RBIs and went for the cycle. He had also had a doubleheader.

In June of that year, Harper was dismissed from a National Junior College World Series game for contradicting a called third strike.

He drew a line with his bat in the dirt as he left the plate, probably to point where he thought the pitch was – this was his second dismissal of the year and ended in a two-game suspension.

This meant that Harper’s amateur career was over – Southern Nevada lost the matches, those where Harper did not play.

Still, he had received the 2010 Golden Spikes Award – as the best amateur baseball player in the USA of that year.

Harper was chosen by the Washington Nationals in the first overall selection of the 2010 MLB draft, but not, as expected as a catcher, but as an outfielder. This was the case for the sake of extending his career and to stimulate his player growth so that he could debut in MLB earlier.

The team managers did not know that they will be going to sign a contract at all – but both sides compromised and on August of that year Bryce was introduced by the Nationals and he had chosen the number 34.

Harper said that he had picked that number because he had always loved Mickey Mantle.

He had good results, and he was selected to play as a member of the Scottsdale Scorpions taxi-squad. In the Arizona Fall League (AFL).

He was the second-youngest player in the history of the league – Haper was just two days older than Fernando Martínez.

On the same that year. Harper and his team Scottsdale Scorpions won the 2010 AFL Championship.

When the Nationals gave him the opportunity to the Hagerstown Suns of the Class-A South Atlantic League, Bryce started minor league career.

In that time he had an exam with an optometrist who told him that he is practically blind and that he had to wear contact lenses.

After that his result became even better –  he hit .480, ten doubles and 23 RBIs.getting seven home runs.

In 2011 he was chosen to represent the United States in the All-Star Futures Game throughout the 2011 All-Star Game weekend.

On July of that same year, Harper was promoted to the Harrisburg Senators of the Class AA Eastern League – he had won  2-for-3 in his AA debut with a run, and a walk two singles.

One month later, Bryce had an injury, and he had hurt his hamstring while going from second to third on an extra-base hit. This was not an easy injury – Harper was carried from the field.

He was on the disabled list for seven days, and the injury had ended Harper’s season.

He has started his 2012 season with the Class AAA International League- Syracuse Chiefs.

He did not become the superstar he will later become, but he was so close – Harper was certainly an above-average starting player.

In the 2014 offseason, the Nationals signed Bryce to a two-year extension, avoiding negotiation.

He gave them back – he gave one of the best offensive seasons in baseball ever.

When 2015 came, Bryce was something else- he becomes the superstar he was meant to become. In the beginning, he had hit .330, with 42 home runs and 118 runs scored, led the league.

When he turned 23 years old, he became a league MVP,  but the team has struggled very much, so the Nationals has lost from Mets in the division.

After struggling down the stretch in 2016 – Harper failed to reach the heights of his 2015 campaign.

But he helped Washington to return to the playoffs – where they lost in the first round, this time to the Dodgers.

Before the season 2017 – Bryce and his team bypassed intervention by signing him to a one-year, $13.6 million deal.

In the midway through the season, they signed Harper to 21.6 million dollars for the next year – he had 29 home runs and an improved .313 batting average; but Harper had missed out time the stretch with an injury.

Harper came in 12th in the NL MVP vote as the Nationals made the playoffs for the second consecutive season. The team had lost in the first round, to the Cubs.

Harper hit .211 with a home run in those five playoff games.

The year 2018 started with an injury – the variable Nationals team miss the playoffs.

According to Spotrac, Harper, in those seven years with Washington, made $52.35 million in cash earnings.

During the off-season, Harper lives in Henderson, Nevada.

As far as religion goes, Bryce is a member of The Church of Jesus Christ of Latter-day Saints. He is very religious, and he said that he has the mission to help and encourage other members of the Church. He said that he knows that his mission is to affect others lives.

He does not drink alcohol, and he sometimes drinks coffee.

He has spoken many times now publicly about his decision to refuse from drinking alcohol.

In 2014, Bryce said that he sometimes drinks coffee during the baseball season.

He is married to a long time girlfriend Kayla Varner – they were engaged in 2014, but broke up, and got back together in 2016.

They married in 2016 in a ceremony at the San Diego California Temple in December 2016.

He owns a customized car, and it is a Mercedes-Benz CLS.

Harper is a supporter of the Vegas Golden Knights of the NHL.

At 19 years in 2012, Harper made his MLB debut with the Nationals and was selected for the 2012 All-Star Game. This makes him the youngest position player to perform in an All-Star Game.

In 2012, Bryce won the National League Rookie of the Year Award and was named the NL Most Valuable Player for 2015 – this is amazing since this voting was unanimous.

When he was just 23, Harper became the youngest MLB baseball player who succeeds in winning the prize.

During the 2018–19 offseason, as a free agent, Harper signed a 13-year, $330 million deal with the Phillies, this was the richest deal in the history of North American sports at the time.

Just in 2018, Harper was offered a one year deal that was worth 17,9 million dollars by the Nationals – he rejected, and he stated that he wanted to test the market and his position.

Some claimed that Haper could be the first baseball player that could land a first ever 400 million or even 500 million dollars deal.

Harper is an MVP in one of the most favourite sports in the world. He plays in a big city and has many profitable endorsements.

In 2016 he signed a 10-year contract length with one of his sponsors, Under Armour- the biggest endorsement deal ever for one baseball player.

Two years later, he signed the deal -with the most logical way since his look is his thing. He signed a merchandise deal with Blind Barber, a chain of barbershops across the country. Harper should help the sales got bigger.