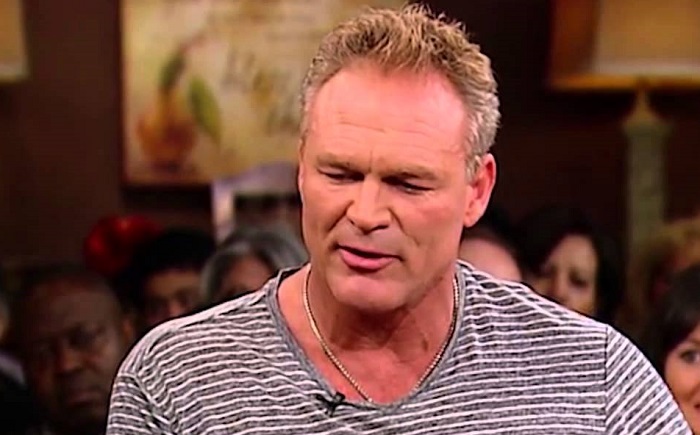 Brian Bosworth, also known as “The Boz” is an ex pro American football player who played on the position of linebacker in the NFL.

He is also known as an actor but didn’t have any starring role in a hit movie but appeared in some known TV series.

He was born as Brian Keith Bosworth on March 9, 1965 in Oklahoma City, in the state of Oklahoma in United States.

His family moved to Irving from Oklahoma when he was 1 year and a half.

Brian had spent all of his school summers on a farm in Meeker in Oklahoma wuth his grandfather and grandmother who were both very vital.

He was a 6 year-old boy when he got interested in football and joined “Young Men’s Christian Association ” football team.

After finishing elementary school he has continued his education at MacArthur High School in a town of Irving in Texas, US.

After his graduation he continued his education (focused on sport) at the University of Oklahoma. He was their very important football player in a period of two years, from 1984 until 1986.

He broke several school records and gave his school a good reputation due to his hard work but he was also a very stubborn and rash person who did a lot of controversial stuff when he was not satisfied with some issues.

Even in college, Brian was known for his strong views and his controversial behaviour.

He raised controversy by wearing a T-shirt during the Orange Bowl in 1987 which had a slogan: “NCAA – National Communist Against Athletes” on it. This was his answer after he was barred from the game because he was tested positive with steroids.

His coach Barry Switzer, who was known as the man who forgave a lot, dismissed him from the team after being shocked with his outrageous publicity stunt. This shirt placed him in the center of all the media that day and outraged a lot of known athletes and critics.

He was a very good linebacker and he won Butkus Award twice and he is still the only player who won this reward twice in his career.

Brian was without a doubt a great athlete but he never neglected his education so he was a very good student and he graduated very early from college.

He always respected the oportunity for education and thought of knowledge as of kind of power.

This situation where he finished school in time made him eligable for the early NFL draft but since Brian was a very peculiar individual his drafting wasn’t without incident either.

He wanted to play only for Los Angeles Raiders since he felt they suited him best because of the way they play, so he had sent a letter to all other teams that he will not go to their training camp nor will he play for the team if they draft him.

This was considered very childish and immature of him but it seems that it helped him in a way that many teams gave up on him because they didn’t want such a stubborn and hotheaded person in their team.

Brian was finally drafted by the Seattle Seahawks, although they were also on the list of teams to whom he had sent his letters in which he asked not to be drafted by them.

His Los Angeles Raiders weren’t interested in him at all. He thought he wouldn’t sign for them but Seattle Seahawks offered him the biggest contract ever given in their team history and also the highest contract for a rookie to sign ever in NFL history.

He could not deny that offer nor he could relocate to the LA team he so desperately wanted to go to.

He was given $11 million in a period of 10 years which is an outstanding amount of money to receive as a rookie.

He raised controversy by wanting to wear the number 44 on his jersey because he wore the same number at college. He didn’t want to give up on this idea although he knew that players on his position don’t get numbers under 50 to wear.

His team even tried to plead the NFL to give the number 44 to him but he was eventually forced to get number 55 to wear.

He played well in his career at Seahawks but was more noticed for his personality and the way he behaved outside football than by his game on the field.

He got into an argument with John Elway from Denver Broncos and trash talked him in such a manner that thousands of Elway’s fans wore shirts with a slogan: “Ban the Boz” at one of the games.

The fans were unaware of the fact that Bosworth’s company made those shirts and that he made a lot of money out of it by selling them at $15. That means that he earned thiusand of dollars by trashing himself. It was quite a move for him.

In 1989, just a few years after he started his career, Bosworth had to retire because he received a serious injury of his shoulder.

In 1993, Bosworth raised a lawsuit against the Lloyd insurance company asking $7 million because he claimed that his shoulder was injured by a heavy hit in the game and not by degenerative arthritis the doctors claim he had at that time.

Because his career ended so soon and he was heavily paid for the short time he played he entered the list of Top 10 NFL Draft Busts.

In 2014, a director Thaddeus Matula made a documentary movie about Bosworth and it was titled “Brain and The Boz”. It was aired on ESPN.

Brian was involved in a lot of low budget films as an actor. His first appearance in a low budget movie was in 1991, in a movie called “Stone Cold”.

He also appeared in “The Longest Yard” and starred in a commercial for Dish Network.

Boz married his high school love named Katherine Nicastro in 1993 and they brought up three kids together: two brothers and a sister.

They were married for 13 years until they went their separate ways but stayed friend because of their children sake.

His daughter is Hayley Bosworth who is a very successful volleyball athlete. She received Coaches award at the University of Oklahoma.

He also has sons Max and Chase and he is trying to be a good father and an example for them. Max is very handsome and works as a model but also has his own venture: he rents a beautiful house in Los Angeles which is used for recovery.

He has spent his childhood with sisters Robin and Vicky, brought up by his father Foster and his mother Kathy.

His current wife is a beautiful actress named Morgan Leslie Heuman. They got married in May 2012 in a very romantic ceremony placed on Turtle Creek.

After he met Morgan he couldn’t get her out of his head so he tried to find her phone number anywhere he thought he could.

In the end he kind of tricked Morgan herself to give him her number. Brian doesn”t use the word “tricked” but rather “pursuaded”.

Brian is a very unselfish man who worked very hard to get where he is now and who rewarded everyone who stayed by his side.

Although he was always pushed to work harder in football by his father, he soon realized that he was on his way to starty pushing others and that was something he couldn’t ignore. He was bullied and punished so he started doing the same thing with others.

That is why he developed soft heart in his adult years.

His grandmother was very religious and after his father died he realized that his religion can save him and make him a better man.

That is why he appeared in “Revelation Road” which is a faith-based film.

Later he also appeared in “Do You Believe?” religious movie.

All of his problems, and the guilty conscience he developed for disappointing his fans, coach and family, have seem to dissappear after he found Jesus Christ and started living by moral rules.