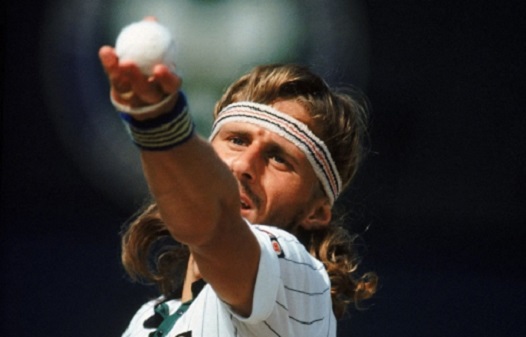 Active from 1973 till 1983, he made an indelible mark in the entire tennis history and is considered responsible for the rise of interest in tennis during the ’70s.

Once he said that he loved a feeling that he can win, even if just in practice, and this was his way of thinking.

Bjorn Borg was born on June 6, 1956, in Stockholm, Sweden as an only child. As a child, he became fascinated with tennis, by always playing with his father’s tennis racket, which is often considered a start of his later tennis career.

Before entering a professional circle of tennis players, he made impressive results as a junior. In 1972, when he was only 15 years old, he won Davis cup against a New Zeeland player Onny Parun.

After that, in that same year, he won the Wimbledon junior singles title and the Orange Bowl Junior Championship for players under 18.

He finished the 1973 season ranked 18th, after being a runner up in three tournaments, San Francisco, Stockholm and Buenos Aires.

In 1974, he made his first and only appearance on the Australian Open where he got to the third round. That year, after singles titles in New Zeeland Open, London and Sao Paolo in just three months, he won the Italian Open which made him the youngest winner in the history of that tournament. Two weeks later, he repeated this record in his first Grand Slam title yet, at the French Open.

1975 was another successful year for him.

That year, he also won two singles matches and one double in the Davis Cup, making them his 19th victory in a row in that tournament since 1973.

1976 was the year known for his first Wimbledon title, where he won without losing a set, making another record, the youngest male champion of the modern era. Unfortunately, he didn’t repeat his success on that season’s French Open.

He lost against the Italian Adriano Panatta, the only player that managed to beat Borg on this tournament, and he did it twice, in 1973 in the fourth round and 1976 quarterfinals. It is essential to mention that he reached the final of U.S. Open, at the end losing to Jimmy Connors.

After having a successful year before, in 1977 he faced legal issues.

World Championship Tennis sued Borg for choosing to participate in 1977 Grand Prix Circuit, a rival competition, which was regarded as a breach of contract.

The issue resolved in an out of court settlement, where Borg was obligated to play six to eight WCT events in the following year. Finally, after the 1977 Wimbledon win against Jimmy Connors, he reached No 1 in the world. After Wimbledon, he sustained a shoulder injury, making him retire from the French Open.

The period between 1978 and 1980 is considered as the peak of Bjorn Borg’s career.

He won the French Open in 1978, defeating Vilas in the finals without losing a set. Also, he appeared on the U.S Open, which was held in New York’s Flushing Meadow for the first time.

He lost the finals to Jimmy Connors. That same year he competed against Joe McEnroe, for the first time and lost the match, on Stockholm Open semifinals.

In 1980 he won his fifth French Open title and most importantly, Wimbledon Men’s Singles final.

That match is widely believed to be the best Wimbledon finals that ever played. His opponent was his rival, Joe McEnroe and lasted for 3 hours and 53 minutes.

Although he was known for his confidence, he later commented that it was the first time he was afraid that he would lose. Borg faced McEnroe three more times that year, in the U.S. Open, the Stockholm Open and the Masters Cup.

In 1981 Borg won his last Grand Slam title, which was a subtle announcement of his retirement the following year. After losing the U.S. Open to McEnroe, he stated that even though he was in great shape, the will and drive to win, was beginning to disappear. Also though he played fewer matches than ever before, his retirement at the age of 26 came as a surprise to everyone.

After his retirement, he engaged in many business deals, one of them being his fashion label, which became very successful in Sweden.

Nine years after his retirement he attempted a comeback to professional tennis. Borg completely changed the recognizable looks that he nourished for years, but unfortunately had no luck in regaining his previous success. Although karate expert Ron Thacher led him, he didn’t manage to win a single match, referring to nine games he played between 1991 and 1992.

Speaking of his private life, Borg had an exciting one. He married three times and has two children. His first wife was a Romanian tennis player Mariana Simionescu. They married in 1980, where the marriage ended four years later. From 1989 -1993 he was married to Italian singer Loredana Berte, and in 2002 he married for the third time to Patricia Ofsted.

He said that he is fully aware that he had the best tennis careers, and that he has no regrets what so ever.

But he also has said that he has found a feeling of peace with himself since he has the opportunity to be with his family and this makes him the happiest guy in the world.

As stated before, Borg is one of the greatest players in the history of tennis. He stands sixth in the list of players that won the most Grand Slam titles, right behind Roger Federer, Rafael Nadal, Novak Djokovic, Pete Sampras and Roy Emerson.

Borg was presented to International Tennis Hall of fame in 1987 and was included in Jack Kramer’s list of the 21 best tennis players of all time.

Often cited as the perfect open era player, his mental strength and footwork are always stressed as his best qualities. As it is also frequently mentioned, he never succeeded in winning the Australian Open, where he played only once, and the U.S. Open, where he lost the finals four times.

Many times Bjorg spoke about his incredible persistence -he said that he is the one player that will never give up the match.

He added that when you look at his matches, many prove that he turned a great many so-called irretrievable losses into victories.

He has distinctive appearance – blond locks and soft-spoken mystique, a real Sweden. People truly loved him.

His competition and relation with John McEnroe were depicted in the movie that chronicles the high-profile 1980 Wimbledon match between these two.

They are portrayed by Shia LaBeouf and Sverrir Gudnason.

The movie depicts their relation – one, Bjorg is calm and persistence, and McEnroe had amazing tennis skills and problematic temper.

The film follows the exciting development through the end of the historic moment in tennis history.

This relation was depicted as the epic rivalry in the tennis world, and this movie is genuinely based on a real-life event.

This Swedish tennis player is worth around 40 million dollars – he had played tennis and hockey when he was small, and it is said that this hokey roots can be seen in his tennis play style.

He gained a lot of money from winning many championships in the 70s and 80s, among them, there are 41 matches in a row at the All England Club.

He came back briefly in the early ’90s but didn’t have as much success.

For example, he was the first man who earned more than a million dollars in prize money in one season.

Bjorg retired when he was just 26 years old – but he never stop gaining money – he has many endorsements, and even more, he has focused on his fashion line, that carries his name.

His fashion label is the second most popular clothing label in Sweden, the first one being “Calvin Klein”. Now, he plays occasionally, for humanitarian causes, etc.