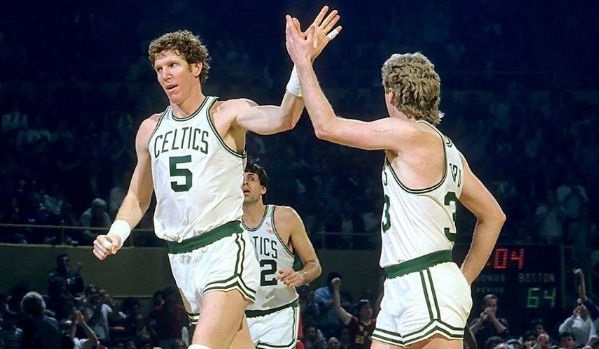 There are not many sports personalities that have resigned from their professions, and who succeed in being amazing personalities in TV and shows, to the extent that that career was even more successful than the previous one.

Bill has retired from professional basketball career, and he made his career worth $20 million.

His professional career started when he was just 17 – he played his college ball at the University of California.

Walton was a two time NCAA Champion and both times won the NCAA Final Four Most Outstanding Player award.

He endured a lot of injuries during his career, and in 1993 he was initiated into the Hall of Fame Oregon Sports and the Basketball Hall of Fame,

Walton overcame his stuttering problem to become a TV broadcaster for NBC, the Clippers, ESPN and ABC, the Sacramento Kings, and the Pac-12.

Bill was born and raised in La Mesa, California, as the son of Gloria Anne (Hickey) and William Theodore “Ted” Walton.

He had two brothers Bruce, and Andy and one sister named Cathy. Walton was always very tall.

His father Ted was a music teacher, and social worker and his mother Gloria was a librarian – they were connected to art, literature, politics and music.

Although Bills parents weren’t sports orientated, he followed in the footsteps of his older brother Bruce, who had drifted toward sports.

This family stays together – they had a family band, Bruce and Bill performed trombone or baritone, Cathy played the flute and Andy played the saxophone.

The first time he had played basketball was under Frank “Rocky” Graciano.

He was the one that had instructed at Walton’s Catholic elementary school.

He made basketball really fun and emphasized the joy of playing.

Walton has said that he was the one guy that did not look attractive at all – he was skinny and tall.

The worst problem that he had was his terrible stuttering, to the point that he could not speak at all.

This made Walton very shy as a player, and he was a shy and reserved person, but this did not mean that he could not found his place in the world of basketball. Cause he found it.

In Helix High School, Walton played basketball along with his brother Bruce. Bruce was older and taller and a football star.

But since the beginning he had a major struggle with injuries, even in his High school – he broke a leg, an ankle, and several bones in his feet. He had to have multiple surgeries to fix this.

This also meant that Walton could not play in the way he wanted – he was a part of the junior varsity team where he played six games total.

After he grew from 6’1″ to 6’7″ coaches looked at him and noticed that he could not catch up with his growing frame.

Here Walton learns about perseverance, and he overcomes all problems and leads his team to 49 continuous triumphs in his two varsity seasons.

He averaged 29 points and 25 rebounds per game at that time.

His first media appearance was in the 1970 issue of Sports Illustrated, where he was featured in “Faces in the Crowd.”

While he was still in school, the San Diego Rockets visited his town. The team often played in his High School as a practice – where he came in contact with Bill.

In the year 1970, he was chosen to serve USA Basketball on the United States men’s national basketball crew at the 1970 FIBA World Championship. He was the youngest player.

Walton accepted UCLA’s scholarship offer to join there and play basketball for the Bruins and Coach Wooden that stayed his lifetime mentor.

He leads the team to two consecutive 30–0 seasons, and he also gave it a record 88-game winning streak.

Some say that Bill was the greatest player who played at the college level.

In 1973, Walton was eventually drafted by the American Basketball Association’s Dallas Chaparrals – he refused.

He had signed with the Trail Blazers – he struggled with many injuries.

But he was successful in the Portland team – he stayed there for five seasons – he participated in 209 games, averaging 13.5 rebounds, with 4.4 assists and 2.6 blocks and a double-double of 17.1 points.

In May 1979, Bill signed as a veteran free agent with the San Diego Clippers, a seven-year 7-million dollar contract. He played 169 games with them, and spends a lot of time on the side, because of his injuries.

Bill retired in 1990 due to many injuries and dedicated himself to the TV career – he worked for NBC, CBS, the Los Angeles Clippers and ABC/ESPN.

In 2003 he was a star of the TV series Bill Walton’s Long Strange Trip on ESPN.

Bill has his satellite radio show, “One More Saturday” and in 2018 he won an Emmy for “Best Live Sports Television Broadcast.”

In 2015, Walton wrote the foreword for the book Unconditional Honor: Wounded Warriors and their Dogs by author Cathy Scott.

In 2016, Walton published memoirs called “Back from the Dead: Searching for the Sound, Shining the Light and Throwing It Down” – it was the New York Times bestseller list for two weeks of that year.

He also had some short appearances in the movies “Little Nicky”, “88 and 1”, “Celtic Pride”, and Semi-Pro.

In 2011, he appeared as Sven the Wise Capital One Visigoth Sports Net commercials.

He was the face of the third season in the reality TV show “Shark Tank” that had its premiere on January 20, 2012.

Walton lives in his hometown of San Diego with his wife Lori – they are married from 1991.

With his first wife, he shares four sons – Adam, Nathan, Luke, and Chris.

All of his family is directed to the sports activities – his big brother Bruce Walton who competed in the National Football League with the Dallas Cowboys from 1973 to 1975.

The two brothers were b-ball teammates in high school.

Bill accompanied Bruce when he was attending UCLA, and Bruce has played in Super Bowl X.

This event makes them two brothers who play in the Super Bowl and NBA Finals.

His sister Cathy was a successful youth swimmer and was a basketball at the University of California.

As far as Bills injuries, we can say that he had real trouble with them – both of his ankles were surgically joined.

Walson many neglected rehabs was related to the use of painkillers by the doctor who was appointed to his case.

He had sad in the majority of his broadcasts that he is just as much to blame for taking medicine as the doctor was for presenting it to him.

In one interview that he gave in 2010 Walton has said that he thought that he would take his own life – all because of his constant pain from injuries.

He is a meditation practitioner and a vegetarian.

Walton has stated that he is very close to John Wooden, a coach that was visiting him often.

In one interview, he said that that Wooden is the most important person in his life outside of his mom and dad.

And the fact was that he felt that he was on the top – he had said that he had no idea how delicate everything was.

Walton has said that all things that Coach Wooden had told him came out to be true.

These two are so connected that on Wooden’s desk, there is a message that was dedicated to Walton.

His problems were partially resolved in 2008 when Walton went to an eight-hour spinal-fusion surgery.

He recovered, but he could not move for a year.

In one interview he said that he is connected to the band “Grateful Dead since he started visiting their concerts in 1967.

He has been to more than 850 of their concerts. And because of this “is known as the “Grateful Red” and the “Big Red Deadhead” and “World’s Tallest Deadhead”.

In the year 2001, Walton was inducted into The Grateful Dead Hall of Honor.

One thing has been connected to the famous writer Ken Kesey whom he had visited at the University of Oregon Ken Kesey Collection.

Walton’s son that is called Luke has gained two NBA Championships with the Los Angeles Lakers. This fantastic result has made them the first father and son pair to win multiple rings.

It is clear as a day that his basketball career was very lucrative, but he also made a fortune as a recognized TV personality.