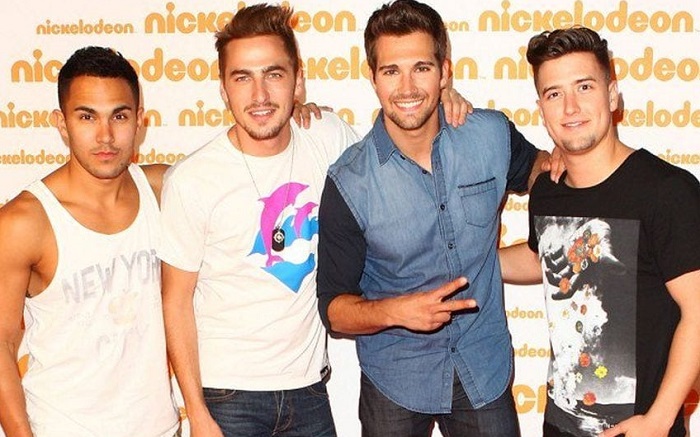 Big Time Rush is the name of a famous American boy band that was formed in 2009 and has been relevant for many years after.

It was made of 4 members: Logan Henderson, Kendall Schmidt, Carlos Pena Jr., and James Maslow.

The group came to fame after their television series called „Big Time Rush“ that was on the Nickelodeon’s program.

While they were doing the show they signed a record deal with Nick Records and did both acting and music at the same time, incorporating their songs into their TV show. After a while, they signed to Columbia Records.

Their show on Nickelodeon aired in November of 2009 and finished in July of 2013. Their first episode debuted their song „Big Time Rush“ that was used as an opening song for the series. With their huger success, they released 3 albums.

In the series, bandmates played characters with the same names as them, but with changed surnames. In the show, they were called Kendall Knight, Carlos Garcia, James Diamond, and Logan Mitchell. In the show, Kendall was playing the leader of the group, Carlos was the crazy and funny one, James was the most handsome one that cared only for his looks and Logan was the smartest one that wanted to be a doctor.

They stopped performing as a band in 2014.

They also released other singles through their series and some of them are „Any Kind of Guy“ and „City is Ours“ that were a part of a storyline of particular episodes.

They also covered a song called „Famous”, that was originally by Play in June of 2010.

In April that same year, they released „Halfway There” after it was featured on the series.

This song went to No. 93 on the Billboard Hot 100 chart and is their first song to do so because it sold a lot online.

In September of 2010, they released their single called “Til I Forget About You”, which was a single from their upcoming debut album. That album was released in October, the same year, and was titled simply „BTR”. This album reached high No.3 on the Billboard 200.

It also went on the fourth place of the Internet Albums list and was first on the Soundtracks list.

One of the songs from the album, titled „Big Night“ went to number 79 on the Billboard Hot 100.

This album was later certified Gold.

In November of 2010, they stated that they will be releasing a Christmas EP, and they did so. It featured two songs: a cover of Mariah Carey’s „All I Want for Christmas is You” and a song titled „Beautiful Christmas”.

It was also No. 30 on the Billboard Pop Songs list.

The same year, they were nominated for an MTV award. It was MTV’s Breakthrough Band award.

They were also attending a lot of Kid’s Choice Awards events and „Boyfriend” was also nominated for the Premios Oye! The award, a big award in Mexico, in the category of Best International English Song of the Year. Unfortunately, they lost to Rihanna.

In July of 2011, the group released a new single, from their new upcoming album titled „Elevate”. The single was called “If I Ruled the World” and it featured Iyaz. The album was released in November the same year and made it to No. 12 on the Billboard 200. Although their second album „Elevate” wasn’t positioned as good as the previous album, it sold far more copies in its first week than the „BTR” album.

They also released a single titled “Music Sounds Better with U” in November. It was by Ryan Tedder from OneRepublic, also a band. This song went to No. 26 on the US Pop Songs.

After the second album, they went on a tour that was titled the Better With U Tour and was done in February and March of 2012. One Direction opened a lot of performances for them, and so did JoJo.

In February that year, they announced another tour and it started in July.

The group also did a movie in 2012. It was called „Big Time Movie”. For it, they traveled to the capital fo England, London. In it, the members of the band went to London because of their first big tour and instead of it had to save the world. The movie was released in March of 2010 in the US, and in September 2012 in Germany.

Big Time Rush also made an EP with the soundtracks of the movie, including a cover of Beatles song.

Critics had mixed opinions about the movie, but most of them were positive. It was a big success in the theaters. It had more than 13 million views in just the first week.

In 2013 they renewed another, the fourth season of Big Time Rush series.

They also released another single called „Like Nobody’s Around” which talk about boy bands, in particular, their rising rival, One Direction. The song was explained a bit on the first episode of season 4, called “Big Time Invasion”.

They also stated that this track is the second single n their third, upcoming album. In April they stated that they made a third album and that they will also be releasing another single in July of 2013 titled „24/Seven”. They also spoke about the fourth season of the series that will start in May of 2013.

In April of 2013, Big Time Rush’s nine-song from the upcoming album and also „Get Up” with only Kendall were leaked.

In June of 2013, they released their album „24/Seven”. The Deluxe version of this album was also leaked which made the thing hard for the boys.

The album 24/Seven wasn’t as successful as their previous album „Elevate“. Some of the singles from the album were „We Are“ and „24/Seven“.

Although the album wasn’t as successful they were still nominated for a few awards, like the 22nd annual World Music Awards. They won the World’s Best Live Act trophy which was huge for them. They were only Nickelodeon stars that ever got the award from the Worlds Music Awards.

After their series stopped airing, Big Time Rush was still touring. They were doing so until March of 2014, and after that split up. All of the members started pursuing their solo careers.

Logan Henderson took a three-year rest from music and released his first solo single titled „Sleepwalker” in January of 2017. In September the same year, he released his second song, „Bite My Tongue”. He released his third song titled „Speak of the Devil” in October. His songs were much darker and described as „grunge pop” which was a big difference from his previous work with Big Time Rush. In May of 2018, he announced his first debut solo album and revealed the name of it. It is called „Echoes of Departure and the Endless Street of Dreams – Pt. 1“.

Since then, Logan released singled like „Pull Me Deep” and „End of the World”.

After the split-up of the band, James Maslow took part in a dancing competition show called „Dancing with the Stars“ in March of 2014. His mentor was Peta Murgatroyd, a dancer. He also got onto the cover of FitnessRx Magazine in July of 2014. In 2015 he released his first single called „Lies”. He also released another track called „Circles” in October the same year. In 2017 he released his debut solo album called „How I Like It“. He also released few singles in 2018 and 2019, like „Love U Sober“, „Falling“ and „All Day“.

Carlos Pena Jr. decided to continue his musical career in Spanish. He released his first solo track called „Electrico” in February of 2014. He was also competing in „Dancing with the Stars“, but in 2015, so he wasn’t in the same season as James.

Carlos Pena got engaged in August of 2013 to Alexa Vega, an actress, and a singer. They got married in January of 2014 in Mexico.

They have a YouTube channel together, called „LexLovesLos“. They have 700k followers on it.

James Maslow is currently single after his split from Gabriela Lopez.

Micaela von Turkovich is with Kendall Schmidt for a few years.

It is not known whom Logan dates today.