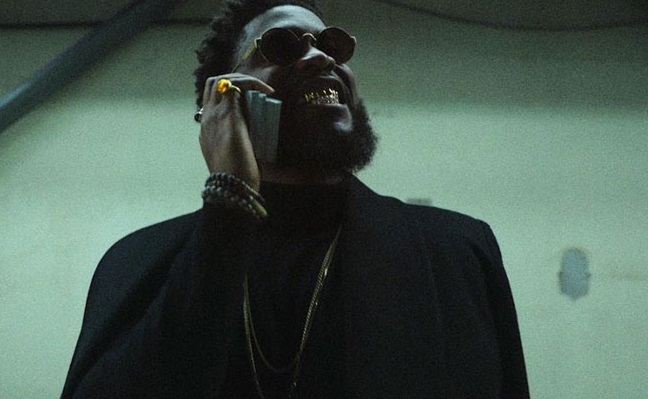 Big K.R.I.T. is the stage name of a male American rapper whose real name is Justin Scott. The Big K.R.I.T. stands for King Remembered in Time.

He was born as Justin Scott in August 26th, 1986 in the town of Meridian in the state of Mississippi in the United States. In 2005, Big K.R.I.T. started taking rapping more seriously and started thinking about it as a career.

After finishing high school, he couldn’t afford himself to pay beats but he learned that himself by playing MTV music generator, a program made for PlayStation which taught him how to make his own beats.

He was very focused on it and learned the beats quickly.

His parents separated at an early age and he was raised by his grandmother. This wasn’t a pleasant thing for a kid to experience but his granny tried to keep him protected from it.

He started rapping when he was 12 and learned himself how to produce beats by the time he was 14.

He was very inspired by Martin Luther King and he is very close to his grandmother. He even wrote a song for her.

Although he enrolled in the community college, he left it in order to start a rapping career.

He first released two mixtapes. The first was Hood Fame and he made it in collaboration with DJ Wally Sparks. The second one was named the last king and this one was made alongside DJ Breakem Off.

He was one of the guest appearances on Curren$y’s third album and he worked on Wiz Kalifa’s Kush and Orange Juice which was released in 2010.

At the beginning of his career, his stage name wasn’t Big K.R.I.T., he called himself Big K.R.I.T.ikal which he later shorted into K.R.I.T.

In the Spring of 2010, he has released a new mixtape with K.R.I.T. Waz Here and he released it for digital download. The mixtape turned out to be a great success.

Sha Money XL, a known American record producer from New York, heard this last tape and liked it very much. He was looking for someone like him, who has different beats.

Sha Money decided to sign him to his label and that’s how he gained an opportunity to become „a major player in the rap game“.

He was one of the members of The Smokers Club Tour 2010, together with Curren$y and another rapper name Smoke DZA.

In November of the same year, he was an opening act to Wiz Khalifa during his Waken Baken tour. He stated that it was an unforgettable experience and that he is a lucky man to receive an opportunity liked that.

In 2011,  he entered the list of Top Freshmen of the year and was featured on the XXL cover alongside Meek Mill, Lil Twist, Kendrick Lamar and more.

In Spring 2011, Big K.R.I.T. released his new mixtape which was very anticipated by his fans and he titled it Return of the 4EVA. He has produced the whole mixtape himself.

Chamillionaire and Ludacris’s guest appeared on his album and the mixtape was very well received by the critics and other rap performers.

The Slant Magazine named it the best mixtape of the month which was great news for him. This kind of advertising brings better sales of the tape and album.

Critics spoke about his great production skill and awesome lyrics and started comparing him to known artists such as Scarface and Outkast who were all southern rappers.

This was a huge motivation for K.R.I.T. and the recognition he wanted. He followed his dreams even stronger and harder in order to succeed in his childhood dreams.

In the fall of 2011, he has joined the Smokers Club Tour 2011 alongside Method Man and Curren$y which ultimately prolonged the release of his announced debut studio album.

That is why the album, named Live From the Underground was released in June 2012 and not in 2011 as announced.

The album went to number one on all hip hop and R&B charts. His first single from the Live from the Underground album was I Got This, which was released one month before the album.

After the release of the album, he went on his Live from the Underground tour which was done in collaboration with an extremely popular rapper called Slim Thug.

He was also one of the collaborators for Lecrae’s single Mayday coming from his known „Gravity“ album.

The name of the song Shine On talks about it as the first single released on the mixtape in collaboration with Bun B. He released a few songs produced by another producer Ninth Wonder.

Most of the mixtape production was made by K.R.I.T. himself, but the tape had many guest performers, mostly notable artists such as Wiz Khalifa, Future and Smoke DZA.

In April 2014, he has released his new song from a new album names Cadillactica. Jim Jon Sin and Rico Love made some of the album’s production.

The song was named Mt Olympus and was a big hit just as the second one he released that eas named Pay Attention.

In 2016, he stopped his professional collaboration with Def Jam which resulted in his own record label Multi Alumni.

One year later he released his third album which made it to the top 10 on the Billboard 200 Chart. The album’s name was „4EVA is a mighty long time“.

The most listened singles from the album were Confetti and Keep The Devil off. As a kid, he played the cello all through elementary school and even junior high school classes.

He has three nominations for BET Hip Hop Awards and they were all in 2011: in the category rookie of the year, best collaboration and best mixtape.

His first two mixtapes were named See Me on Top volume 1 and See Me On top volume 2. He often traveled to Atlanta, the heart of hip hop, where he managed to sell his beats and use the money from it to promote his own music.

His first step forward was when he started his collaboration with New York Indie Imprint Cinematic Music Group.

He has almost 600k followers on his Instagram account and the number is growing on a daily basis.

He is in a relationship with Mara Hruby, a singer and a songwriter from Oakland. She is a jazz artist and has her own website called marahruby.com.

He posted a romantic birthday congratulation post on his Facebook where he wished her a happy birthday calling her “his Queen”. It was in 2017.

She has a little over 30 k followers but it can be seen from her Instagram that she is a very special lady who cherishes love and trust above all.

She is also very creative so her Instagram photos are anything but dull.