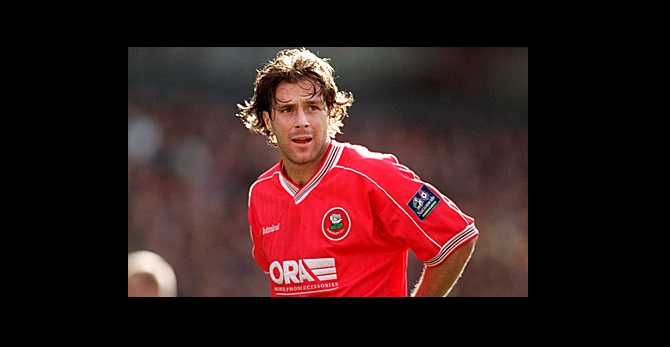 Ashley Ward is an ex English footballer who became a very successful businessman after he ended his sports career. He invested his hard earned money in a development company.

Ashley Ward was born on November 24, 1970 in Middletown  in Lancashire in England. His father was an engineer in coal mines.

He went to William Hulme’s Grammar School. He trained Lacrosse and Rugby there but at the end he chose football over them. He was very good at this two sports and his teachers wanted him to train them, but at that time he was already fascinated with football.

He had 16 appearances as a forward player in Manchster’s United Junior B  Team from 1986 to 1987. He joined them at the end of high school.

After that he joined Cheadle Town Youth. He had an offer from Blackburn Rovers football club but he chose to be a member of Manchaster City.

He played for a lot of football clubs including Crewe Alexandra, Norwich City, Barnsley and many more.

The part of his career which was most notable was when he was playing at Crewe Alexandra Club.

He was retired in 2005 but it hadn’t stopped him from pursuing another kind of career: the one in business. He runs a lot of businesses with his wife.

They run a nursing home in Bolton, they are managers of a luxury property company called Bilton Ward Developments, which is specialized in renovating luxury homes.

His wife is a reality TV star in “The Real Housewifes of Cheshire” so he is also often on TV because of that.

He is also a director of an interior design company called Arista Design.

Both of them are big philanthropists. They organize an annual ball at their home called “Creme de la Creme” for charity purposes. The ball is visited by many football stars and celebrities.

He is married to Dawn, who is a former model. They have met in Bolton, in a car park and she once confessed that she went on a girst date with him just to make her ex- boyfriend very jelaous. But it turned out to be a very happy relationship and he asked her to marry him five years after their first meeting.

He wanted to be romantic so he proposed to her in that same park.

They are in a happy marriage, surrounded by their kids.

They have four children, all daughters: Darby, Taylor, Charlie and Aston.

Dawn calles her daughters ‘the UK answer to the Kardashians.’

Although they are very rich their children are not spoilt.

Their eldest daughter Darby is a pop star on the rise and  works on reception in Dawn’s clinic. Taylor had to wor in a bar to save up to go travelling around the world.

Hobbies: playing sports with his kids

He renovated the houses of Wayne Rooney and Kevin Campbell.

He has a tattoo on his right pac.

He atrended a 322 km cycling tour in Italy and it was all for charity, raising funds. Although he left his football career he continued to do sports, especially cycling.

His Bilton Ward Development Company is worth £15 million and the business continue to grow.

He has a mansion with a beauty salone, cinema complex, underground bar and gym. He also has a tank of large fish in that bar.

Ashely Ward is a former Manchaster United player who became a successful businessmand a a reality TV celebrity since his wife was alreadx home.