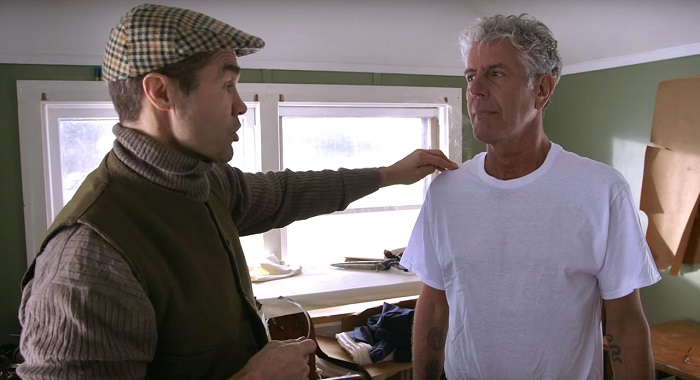 Anthony Bourdain is an American chef, writer and a TV star, known for his many interesting TV series, shows where he was a guest and for a very honest and realistic way of writing.

He was born on June 25, 1956 in New York in USA. He grew up in Leonia, a New Jersey suburb. His childhood was very dynamic and his family moved a lot so he developed a passion for traveling and getting to know various cultures from the young age.

His father, Pierre Bourdain, was an executive producer in the music industry and his mother Gladys worked in The New York Times. Although his father’s family are Catholics and the mothers are Jewish, he was raised in a non religious environment.

His ancestors emigrated from France in the World War I, and that is the reason his father speaks French and why Anthony spent a big part of his summer holidays in France. They often went there on vacations where he fell in love with France and its cuisine. France is a big inspiration for Anthony because he has a special bond with it.

His love for food was born during his trip to France with his parents while he was a young boy. He tried his first oysters from a fisherman there and he was enchanted by the taste. That is how he found out that food can be very delightful and began to cook at home. His love for food only grew from that point on and he started to get involved into various shapes of culinary adventures.

He went to Dwight-Engelwood School and graduated in 1973. He enrolled a famous private college, Vassar, but after two years there he dropped out, unsatisfied by it. He said he felt restrained from the things he loved and that he didn’t have time to live his hobbies.

During his time in Vassar he started working in Massachuserrs’ seafood restaurant, earning money and waking up the cook inside him. This confirmed his decision to pursue that career. He enrolled the Culinary Institute of America in NY and graduated in 1978. He said that he finally felt like he was doing something he loves because he felt happy and fullfiled.

He worked at many restaurants in New York, such as “Sullivan’s” and “Supper Club”.

He made his way up and became a very respectable chef: the executive chef at “Brasserie Les Hales” in Manhattan.

He stayed there for a long period of time and he is still strongly connected to it. He said that he is very proud of his work because all of his fame is earned by it. Anthony has no sympathy for young cooks who are working in restaurants and want to become famous, but aren’t ready to spend a lot of time working.

His first writing experience was when he wrote articles for The New Yorker. After an article “Don’t Eat Before Reading This” he woke up people’s interest in cooking.

His bestselling book was called “Kitchen Confidential: Adventures in the Culinary Underbelly”. Anthony says that writing is one of his favorite things because he gets to tell stuff about food that he usually can’t.

After the success of this book, he wrote a sequal in 2010 named “Medium Raw: A Bloody Valentine to the World of Food and the People who Cook”. Bourdain claims that everyone can cook and people who say that they can’t haven’t had the right experience which will prove them they do.

He wrote several books and the most popular of them was “No Reservations: Around the World on an Empty Stomach”.

Due to his popularity, he managed to travel all around the world, to visit places he has  never seen and to film documentaries about it. People love the way he writes because he ombines comedy, cooking and traveling.

He also wrote a lot of articles and essays in The Times, The New Yorker, The Observer and in many food abd lifestyle magazines.

He was among the judges on TV show Top Chef and during that period he wrote a blog which was nominated for the Webby Award.

From 2005 to 2012 he filmed “No Reservations”. It was a huge success and people loved the fact that Anthony has no limits. He loves to drink, he loves eating, he curses a lot and is very funny.

In 2012 he relocated to CNN because he wasn’t satisfied anymore with his Food Network producers. He made “Parts Uknown” which started running in 2013 and still lasts.

He was in a 20 years long marriage to Nancy Putkoski, until 2005. Nancy Putkoski was his girlfriend from high school and they got married in 1985. They didn’t have children together.

In 2007 he married Otavia Bussia but they separated in 2016. Otavia was from Sardinia and in 2007 se gave birth to Anthony’s only child: a girl Ariane.

Anthony says that it’s hard to find a girlfriend if you want to lead a life full of adventures. Most of the women he was with had no intentions on traveling daily and Anthony says that he really wishes to find his true soulmate someday. However, his current girlfriend is much more open to hedonism and he is very happy of it.

At the young age of 17, Anthony was hired to work at a wedding. He had to be a dishwasher. He says that this was a very interesting job since he saw the bride and the main chef having intercourse at her very own wedding by the garbage. He says he couldn’t help but laugh out loud.

Anthony Michael claims that he got his writing talent from his mother since she is also a writer.

Anthony is now dating Asia Argento. She is covered in tattoo’s and acted in horror movies. He said that he loves women who can kick his ass because he is also very dangerous himself, as he ironically claims.

He loves jiu-jitsu and acai bowls. It’s a weird habit he got when he was in Brazil, where they taught him that he can heal from food.

He has a schedule of things he does and he keeps it to himself. He never breaks it and is a bit obsessive over it. He cooks, makes shows, travels and trains jiu-jitsu, all by his planner.

He has an incredible immunity to alcohol. He says that he does get drunk pretty often, but he developed a much stronger sense for alcohol, since he drinks on every trip he goes to.

Anthony Bourdain is a well known American cook and a TV personality, known for his interesting way of describing food, and known for his love for food and drink.