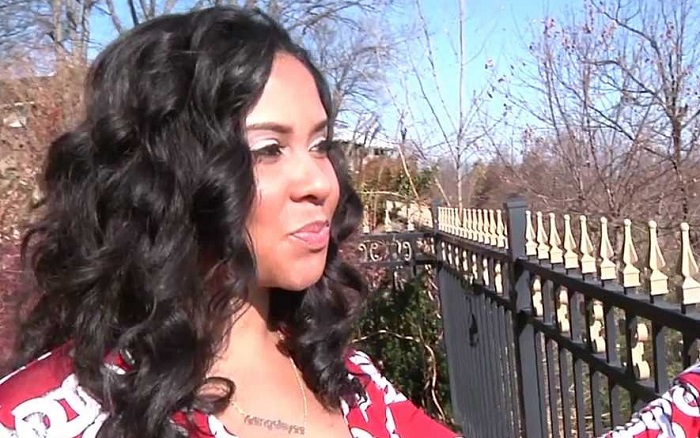 Angela Yee is one of the most popular radio industry personalities in the United States.

This beautiful brunette was born on January 3rd, 1976. Angela was born in East Flatbush, New York, the United States.

Her mother, Mary Yee is of African origin and her father, Celestina Farage-Yee is originally from China.

When Angela was on college, their parents got divorced, but they kept this information as a secret to Angela and continued to live together. This is something that she revealed to her fans when she was a guest on the TV show, The Real.

Angela Yee grew up and was raised in New York, but half of the childhood she spent in New Jersey.

Eventually, she began to live in New Jersey where she moved in 1991.

After she finished high school, she started her studies of English language at Wesleyan University in 1991.

During her studies, she wanted to become a writer.

When she graduated from college, she was attracted to the music industry and one of her interests was marketing too.

At Wu-Tang Management she was an intern. There she worked as a CEO assistant.

Angela Yee was a part of the GZA’s (member of the Wu-Tang clan) album on which she worked as a writer and wrote all of its skits.

This album was on the first place of the US Top R&B/Hip-Hop Albums chart, and also on the 9th place of the Billboard 200 list.

As a manager of Jay Electronica, she was involved in his contract signing with Roc Nation (Jay-Z’s label) and her contribution to this was undeniable.

Her career as a manager was very successful. That was acclaimed when she was working for an Australian hip hop musician, Matthew James Colwell, widely known as 360.

Her career as a radio person started on the radio station owned by Eminem, called Shade 45, which is on Sirius Satellite Radio.

There she worked as a host of The Morning After with Angela Yee and Lip Service.

The first name of the radio show The Morning after Angela Yee was the Cipha Sounds effect. However, in 2008 Cipha left this radio station and the name of the show was changed.

In 2008, Angela was a host in an entertainment show which was broadcast every day, and it was called Angela Yee Rumour Report.

This TV show was presented on Flow.TV which was a part of Ripe Digital Entertainment. She worked as a host of this show, for only six months, and it was on the air from July 2008 to December 2008.

Her current job is on New York’s Power 105.1 where she works as a host of Breakfast Club which is going live on weekends, in the mornings, from 6 am to 10 am.

She started this job two years after she left Shade 45 and Ripe Digital in 2010.

In this show, Angela is a host of celebrity stars, and through a conversation, she drills them getting from them honest thoughts.

She also created her own a segment called “Don’t Quit Your Day Job”, in which she hosted artists such as Big Krit, Machine Gun Kelly, and Drake before they signed for great labels.

Angela has also worked on TV, where she has been a correspondent for the show Sucker Free, which has been presented on MTV 2.

On the VH1, she was one of the members who were the cast in the reality show called The Gossip Game. In this reality show, people can follow the lives of seven famous women from New York, who work in the blogging industry and on the radio.

This show had just one season which contained eight episodes.

Films Fight Your Way Out, from 2017, and Empire, from 2015, are some of the films where Angela has been featuring.

It is estimated that Angela Yee’s present net worth is about $2 million. By doing her job, Angela earns about $600,000 every year.

She has a lot of reasons to be fortunate regarding her net worth and salary too, because her popularity is constantly increasing, thanks to her shows that are now in a much higher range.

Angela Yee is someone who does not talk too much about her private life.

However, she has been connected to some of the celebrities. The rumor has it that she was dating Plies, a famous rapper from the United States.

It was also rumored that they were seen at certain events, spending time together. One of these events was Angela’s birthday party, and Plies hosted this event.

The famous site, Mediatakeout, which gossips about the lives of celebrity stars, has analyzed the possible love affair between Angela Yee and Plies.

This site stated that we could not be so positive about this gossip. Just because they were at the same event together, and because he hosted her birthday party at Dream Night Club Miami, did not mean that they were having a love affair.

Moreover, Plies officially referred to Angela as being as a sister to him. Neither Plies nor Angela affirmed the rumors about their love affair.

When in 2016 Gucci Mane, the famous rep musician from the United States, was a guest in Angela’s radio show The Breakfast Club, he claimed that she had been flirting with him in previous years.

When Gucci Mane was asked by the other two hosts of this radio show, DJ Envy, and Charlamagne tha God whether he slept with Angela Yee, the famous rep musician replied that he had slept with her.

On the other hand, Angela was furious about this statement, and she denied everything and said that such a thing had never happened.

Gucci Mane was persistent and pushy and he told Angela that she was constantly texting him and asking him in which hotel he was staying and similar things too.

Angela replied that he definitely confused her with some other woman and there was no possibility that it was her. She would never do such a thing.

DJ Envy was on Gucci Mane’s about this issue, telling that he had never known Gucci as someone who told lies.

However, the other host Charlemagne did not share this opinion.

In 2012, there were certain rumors that Angela Yee had a love affair with Teeyon Winfree, widely known as Vado (an American rap musician).

During Angela’s radio show, she made controversy by herself. This happened when Soulja Boy, an American rapper and actor, and Maine commented that lady body parts of K. Michelle had an odor.

Sometime later, K. Michelle stood up against Angela during her show, face to face.

At the moment, there are no rumors that are connected to Angela Yee’s private life.

Angela Yee is not married, and since she keeps her private life a secret from the public, no one could say if she is or is not in a romantic relationship.

According to certain information, Angela Yee is in search of a partner that would fulfill her in her life, in a way that she could share all her secrets with him and also show him and present him in front of the public, and not wanting to keep their love romance as a secret.

During certain public events, she has been seen with some boys, but she has never confirmed whether they were her boyfriends or not.

Angela Yee is a beautiful woman, very slim and slender. She is not very tall, being only 161 cm. her hair is black and Angela’s eyes are black too.

Angela Yee is very active on social networks. In fact, she has a lot of followers on her profiles regarding social media. Only on Instagram, more than one million people are following her. On Twitter, she has more than 900,000 followers, and on Facebook, this number exceeds two and a half million followers.

In order to spread awareness regarding health in local communities, Angela, together with DJ Envy, started Juices for Life, in 2016.

This company is situated at 277 Malcolm X Blvd.

The site for this company reads that many people who live in communities which are poor are not able to get their health insurance, and doctors are not able to visit them on a regular basis.

If their health awareness rises, they will limit disorders that are generally unnecessary which are caused by a high level of fat and sodium in foods.

This health consciousness would help the generations that are about to come.

Angela said about the whole business that she hoped that people who had never made an attempt to improve their lifestyle now would try this for the first time and adapt themselves to a healthier way of living.

The whole thing is about investing in a lifestyle that would bring benefits to people, and that is always the key point.

Angela Yee has been hired by AMP ENERGY Organic in order to find some other specific hustlers all around the world.

In total, they need five hustlers, and they are looking for them through “Search for the Ultimate Side Hustlers”.

This contest was for everyone who had some kind of side hustle that is special enough.

They accepted almost everyone, who had any kind of unique hustle, in all categories such as music, food, art, beauty or fashion.

When the submissions were closed, the team from AMP ENERGY Organic together with this popular radio personality reviewed everything, and they chose five finalists who were able to show their unique hustle in New York City, at Power 105.1’s Powerhouse.

This contest was held from September until October 2018.

Angela has expanded her popular brand with also a famous podcast called “Angela Yee’s Lip Service” and also a freelance type of writing together with YRB Magazine and Vibe Magazine.

She also has her website which is called www.teamyee.tv. Angela has received numerous awards, such as the “Shirley Chisholm Women of Distinction”, and WEEN Mission Award.

WEEN is actually a non-profit organization, created by men and women who are committed to promoting, supporting, and defending the positive, balanced picture of women both in society and in the entertainment world.

There is even WEEN academy, which is held every year and it is actually a summer program with a purpose to emerge young women in the entertainment world and industry.

Angela has also devoted her efforts and time to giving speeches at schools and on educational meetings as well.

During these meetings and speeches, she has been working with The Bowery Mission, Coats for Kids, Children Making Strides Against Pediatric Cancer, Makeover Your MS, Dress for Success, and many other organizations for collecting money in charity purpose.

New York Public Library named her as their ambassador for the year 2018.