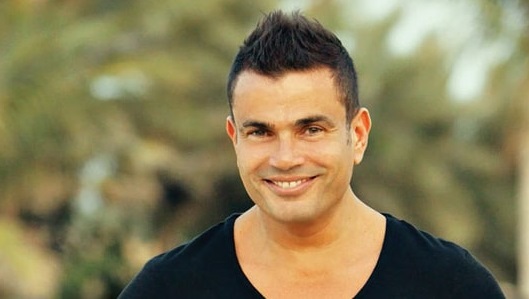 Famous singers around the globe, make our days more beautiful by sharing with us their talent and also beautiful compositions. In today’s text, we will talk about a famous Arabian singer called Amr Abd Elbaset Abdelazez Diab.

We will talk more about his net worth, his biography, personal life and all the other things that you would like to find out about this famous singer.

Amr Abd Elbaset Abdelazez Diab October 11, 1961 in Port Said in Egypt. Amr’s father was a worker at the Suez Canal Corporation and he was also the chairman of the Marine Construction and Shipbuilding in Suez Canal. The family had plenty and was living quite well for that time.

It was his father who motivated young Amr to experiment with music. And now, his son is one of the most famous singers of that area.

He performed for the first time in 1967, at just 6 years old, at the event of the July revolution, where he sang the Egyptian national anthem. Because of his amazing talent and beautiful performance, Amr received a guitar as a reward.

Even though he knew from that moment on that he will be in music, he still wanted to finish college and get his degree.

He finally graduated in 1986 with a degree in Arabic music.

Since there aren’t any more information about his early years, we will continue on by sharing more info about his career.

Amr was always into music and singing, but his first professional step was taken when he released his first album under the name Ya Tareeq that came out in 1983. He didn’t wait long to release his second album in 1984, under the title Ghanny Men Albak.

Another album with the cooperation with Delta Sound under the name Hala Hala, Mayyal and Khalseen. His songs became hit songs instantly and people were going crazy over his releases. All of the songs were in the top 10 songs on the charts.

He was chosen as the most successful pop singer in the Arab world in 1992. His main albums are Amarain, Awedoony (with choreography by Karim El-Tonsi) and Welomony.

In addition, his duets with the international star Khaled and the Greek diva Angela Dimitrou have been great successes throughout the Middle East. Almost all of his up to now 16 discs have known popularity throughout the Arab world and even worldwide.

He has also won awards at music festivals, especially for his song Nour El Ain. It is also the image of the Pepsi beverage brand in the Middle East.

Amr is also an owner of an other businesses and he also made many investments in his life. Besides that he also owns man properties and cars that allow him and his family to live pretty comfortable.

Since he is only 57 years old, we can expect something new from him in the future.

Amr was always a talented kid from the young age. His singing talent was noticed by everyone but it was his father who inspired him the most to pursue a career in singing.

He motivated him to practice singing. His first performance was in front of a large audience at the age of 6, and even then he stunned the audience with his amazing voice.

He received a reward for this performance by the governor, and the reward was a guitar. In 1986 Amr Diab obtained his degree in Arabic music. In 1985 he released his first album “Ya Tareeq”, which achieved instant success, and in 1986 “Asef”. From then on, nothing would stop the artist who later released albums like, Hala Hala (1987), Mayal (1988) , Shawakna (1989) and Matkhafesh (1990).

In 1990 he represented Egypt in the 5th. African sports tournament where he performed with equal professionalism in English, French and Arabic. Concert was broadcast via satellite for the entire Arab world and featured on CNN.

Amr has performed concerts in different parts of the planet such as Australia, Canada, the United States and Europe and his fans are counted by thousands around the world.

Amr Diab was the first Arab artist to make video clips for his subjects and acted in films, among them “Dhahk We La’ab”. The performance opened the Egyptian Film Festival in 1993.  Amr Diab’s music style was called “Mediterranean Music” due to the combination of Arab and Western rhythms.

In 1996 the launching took place “Nour the Ain”, album that obtained an extraordinary success and not only in the Arab world; is it with this production that it transcends borders. The theme “Habibe” becomes an international event in Argentina, France, Chile, and South Africa. This theme was remixed by famous European deejays playing in the clubs in Europe.

1997 was a very successful year for Amr Diab. He won a total of three Awards in the Annual Arabic Festival.  In 1998 he received Triple Platinum for his song “Nour el Ain” and the World Music Award on May 6 of that same year sponsored by Prince Albert of Monaco. He also assisted by international music stars such as Gloria Stefan, Celine Dion, The Backstreet Boys, Mariah Carey, Steven Segal and many others.

This type of award went for the first time to an Arab artist demonstrating its international significance. The video of the album “Awedony” is filmed in the Nile River and is a success as the previous productions reaffirming its celebrity status in the Arab world and abroad.

In 1999 a new album is released for sale: “Amarain” in which he included duos with Cheb Khaled and the Greek singer Angela Dimitriou. Many of his songs were translated into different languages performed by singers from Russia, India, Argentina, Spain, Israel, Bulgaria, Chile, Brazil, Turkey, Greece and Kuwait, among others

Amr Diab also made commercials for important companies, such as Pepsi, starring versions for the Middle East, among which the commercial “Gladiator” with Pink, Beyoncé and Britney Spears and “Wild Things” with Beyoncé, Jennifer Lopez and Beckham.

The years 2000, 2001 and 2003 marked new successes, the albums “Tamally Maak”, “Aktar Wahed” and “Allem Alby” were record sales and positioned at the top of the musical rankings. In 2002, the singer again won a World Music Award and in 2003 he played a role in the movie “El Motamared”.

In 2004, he signed a contract with Rotana TV (prestigious Arabic music channel) and launched the “Lealy Nahary” instant sales record. In 2005, he launched “Kammel Kalamak” with the same success as previous productions. In the personal order Amr Diab has 4 children, 1 of his first wife Sherine Reda and 3 of his second and current wife Zinah Ashour.

Amr told the public in 2016 that he broke the Guiness Record for the Most World Music Awards for the Best Selling Middle Eastern Artist, even though this record was broken by Fairuz who sold around 150 million records across the globe.

Amr has many followers on his social media accounts which allows him to stay in touch with his many fans. Amr is not only famous in his home country, he is also very popular in all the other countries in the world.

Even though he is probably done with his professional career, we can still enjoy one of many of his beautiful songs.

He will definitely go in the history as one of the most successful Arab singers of all time with many fans all around the world.