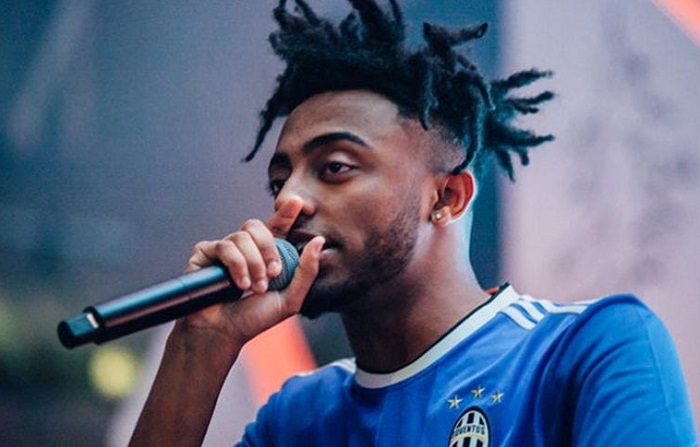 There are some rappers in today scene that do not have a primary motive to make money and just to be popular, but they want to be something more – some of them speak openly about essential topics.

Some of them openly speak about politics – and just because it is someone young and rich do not mean that it cannot speak his mind.

One of those rappers is rapper Amine – a young rapper who as a student who wanted to becomes a musician.

The rest is one very interesting story, and as far as money goes, Amines net worth is around one million dollars, and he is only 25 years old.

Amine is the son of Ethiopian and Eritrean immigrants who immigrated to the US – his mothers worked at a post office, and his father was a teacher and translator.

His name means – “I Believe”, his father told him.

His first ambition was to play basketball professionally one day, but he was cut off from the team.  From there, Amine eventually got into rapping- this was a hobby at the beginning at, later on, a real job.

He studied marketing on Portland State University, and he also worked as an intern at the hip-hop publication Complex.

In 2012, after his graduation, Amine began rapping more professionally  – and finally, he started recording his own songs.

He comes from Oregon, the city that is known for its indy music and it was the birthplace for Amine and his impressive rap.

In one rare interview, Amine said that he is incredibly grateful for the fact that he comes from the city, that was not so “popular” like LA or New York, and that it made him who he is today.

But the beginning of his career started truly in 2014, two years after his graduation – on January, Amine released his debut mixtape titled “Odyssey to Me” – that was sold digitally. It contained 19 tracks, and among them, the most popular is: “Can’t Get Close”, “My Emotions”, I Know It,” Can I Cuuuut”,  and Big Talk Short Walk.

Critics said that album was good.

On that same year, he released his first EP called “En Vogue EP” – it was available digitally, and had 7 titles- “Tied In”, “Get Down”, “En Vogue”,  Plastic Life, Oregon Fair, Game Needs Me, and Mr Nobody. Some songs included features of Neka and Emily Liberta.

At the end of summer 2015, Amine dropped his second mixtape, “Calling Brio”. It had 10 ten tracks – he collaborated with Buckwild, Zzzz, Beast, Brightwood, Rage/Peace, and La Danse. It had well over a million streams altogether.

He stated that this album was created in a really stressful time for him and that it had a therapeutic feel for him.

Amine released his debut single, called “Caroline” – he produced it with Pasque, and it was a major hit right away – it peaked at number 11 on the Billboard Hot 100, number 30 on the Mainstream Top 40, and number 5 on the Hot R&B and Hip Hop Song charts. It was popular in the US, New Zealand, Canada, and the Philippines.

The music video for “Caroline” was released on June 1, 2016 –  the video starred him and two friends, riding in the back seat of a vehicle. This video had more than 170 million views.

“Caroline” received 3x platinum accreditation in the US after selling over 3 million copies; in New Zealand, it garnered gold status after 15,000 sales.

Amines second single was “Baba” released in 2016 – this was the tale of love, and it was streamed over 1.63 million times on Soundcloud, and on iTunes “Baba” holds a 4.4-star rating.

In 2017, Amine dropped his next single, REDMERECEDES – it was released through iTunes, and it has received over 1.8 million hits on Soundcloud since its release. On Youtube, it has been seen more than 2.5 million times. But this song had its other “value”; it spoke about Amines concept about racism.

This song was interesting for its notion of “reverse-racism”, and many consider this song as the most powerful of all of his songs.

Two other singles followed – “Heebiejeebies” (Feat. Kehlani), and Turf. Most recently, after which he dropped his debut studio album called “Good For You”.

It was distributed by Republic Records, and many famous artists such as Ty Dolls Sign, Nelly, Charlie Wilson, Offset, and Kehlani worked on the songs. Some of them are: “Spice Girl Sundays”, “Blinds”, “Wedding Crashers”, “Dakota”, “Beach Boy”, and Money.

Clearly, Amine finds inspiration everywhere, and he delivers some exciting rhymes, and videos also – in one Amine pays homage to the Spice Girls (and here is interesting trivia, this was his first concert ever), with especially ‘Spice Girl’ – Melanie Brown, aka Scary Spice, this was his self-directed clip.

In this song, Amine wanted to use part of their song “Wannabe”, especially the part that said “zig-a-zig-ah”, and he gets the permission from their (Spice Girls”) manager Simon Fuller.

In another song titled “The Good For You,” video depicts him seated on a toilet, pop art-style.

Amine is Oregon native, but now he lives in Los Angeles.

Amine is one musician that is very outspoken about the politics – he openly criticises USA president Donald Trump.

On 2015, on The Tonight Show Starring Jimmy Fallon, he performed a remixed version of his famous song “Caroline”, just in the end of performance rapper performed a verse devoted to the results of the 2016 US election. That verse speaks about 9/11, about never forgetting that day. He speaks how he is black and very proud of it. He directly talks to Trump that he will never make America great again and that the only thing that Trump did was to make this country (USA) hate again.

Amine also openly criticise Trump’s immigration policy during the 2016 presidential campaign, and this was especially important because his parents were immigrants.

One of his famous fans is no other than the daughter of a former president, Barak Obama, Malia.

He believes that the best way to write songs is to live life, and travel – he gets his inspiration from meeting people and having conversations with them.

He is always on his phone notebook, but the best way is to write is to live a regular life and keep in touch with family and staying normal, every other way is not a good way, he said.

One of his favorite movies is “Submarine” that was made by a British director named Richard Ayoade.

The Oregon born rapper puts on several live shows over the past couple of years, and in 2016, he hit up nine different cities across the globe from Berlin, Germany to Brooklyn, New York. This comes on the top since Amine regularly performed in the USA.

He is connected to fans who support his work, in a sense, that he set up an online shop via MyShopify – he sells several items, among them, the most popular are t-shirts. Aminé has declared before that he wants to branch out into directing movie and fashion.

Amines Vevo channel on YouTube is also one source of his income, and his videos had almost 200 million video views. So far, his most popular upload, the official music video for Caroline has been viewed over 176 million times. He can earn from $25 to $35 per 1000 views.

He makes money from advertising on Soundcloud, as this is another platform in which he can earn some more cash through ads.

He is very careful when his social networks are in question – he tries to be careful and a little more sensitive about everything he is saying.

Before he tweets, he speaks about that topic with his team so that he is sure what he wants to deliver to the world.

Amines music is described as positive, and political even, for some, it is proactive.