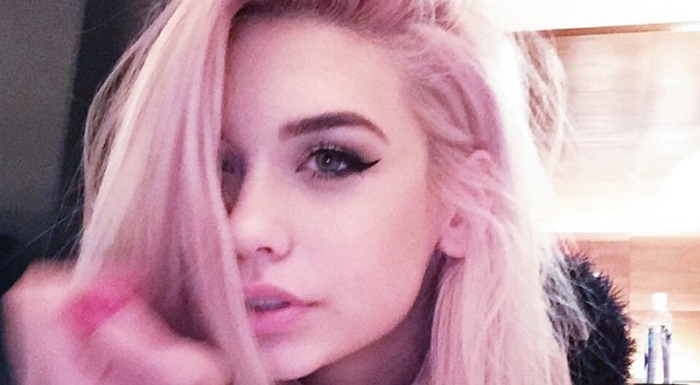 Amanda Steele is a YouTube personality known as the owner of MakeUpByMandy24 Channel that became popular for beauty and makeup tips, but most of all Amanda’s genuine personality.

Mandy started the Channel when she was just a girl. Today she has grown form a blogger into a most sought-after model, actress and a million dollar celebrity before even turning 18.

She is a social media star with 2.7 million followers on Instagram and almost 3.5 million subscribers on her two YouTube channels.

This article follows up on Amanda Steele’s success story, giving you an insight on her net worth, personal info, social networks and more.

So one might say that Amanda’s Early years and her Career development are one and the same chapter because she hit success when she was only 14. At that time Mandy stopped going to school and started homeschooling to focus more on her career.

In 2009 Amanda Steele was a 5th grader who also became a YouTube content maker. She posted tutorials for school makeup and hairstyle, soon also focusing on outfits and constantly trying out something new.

At the beginning she wore braces and was just a school girl that quickly captured the hearts of her peers. She grew into a charming young woman in front of her audience’s eyes.

In January 2014, only four years after starting her Channel, Mandy reached the one million subscriber milestone and the number tripled in the course of the next three years.

In the 2016 Amanda Steele won the Streamy Award for Fashion. At the beginning of the same year she signed with IMG Models and started a serious modeling career.

Mandy now has her own makeup line “Amanda Steele x ColourPop” and a popular sunglasses collection with Australian brand Quay.

Amanda debuted on TV in an original series “The Social Life” that documented her life in the spotlight of social networking fame.

Amanda grew up with a sister named Lauren, who is five years her senior, and the two of them are very close. There is no info about their parents.

Mandy was in a relationship with model Markel Williams. They broke up in September 2016 after a more than a year-long relationship closely followed by fans through the couple’s social media posts. Amanda is going as single for the moment.

Awards: The 2016 Streamy Award for Fashion

Amanda Steele’s net worth is estimated to be $1.5 million. Amanda earns her income from modeling and YouTube. She hasn’t appeared in a big movie yet, but considering she’s being heavily promoted as an actress, there is no question Mandy is destined to star in a blockbuster.

Mandy exercises regularly and eats a balanced diet to keep in shape. Of guilty pleasures she loves Oreos and hates strawberries.

As a school girl Amanda was a cheerleader and softball player.

She has a dog named Harley.

She has 2.7 million followers on Instagram and almost 3.5 million subscribers on her two YouTube channels. Amanda is currently single and shining as a try star wherever she appears, looking to dazzle her fans and general public even more in the future, since she has yet to turn 18 in 2017 and already earns a $1.5 million net worth.