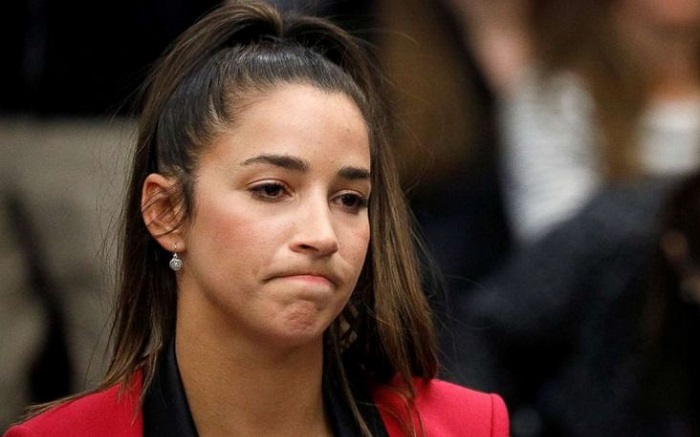 Alexandra Rose Raisman is an American gymnast,  two-time Olympian and model; even more, she was the team captain in the 2012 “Fierce Five” and 2016 “Final Five” U.S. women’s Olympic.

She is a gold medal winner in 2012 Olympics in London, as well as the bronze medal on the balance beam.

In Rio de Janeiro, at the 2016 Olympics Aly won a gold medal in the team event.

Aly has also worked as a model and appeared in Sports Illustrated Swimsuit Issue.

Aly was born in 1994, in Needham, Massachusetts, as the daughter of Lynn (before marriage she was Lynn Faber, and she trained her daughter), a former high school gymnast, and Rick Raisman who actively played hokey.

Aly has three younger siblings: Brett, Chloe, and Madison  – in some interviews, she has said that she has a secure connection with her sisters and that she was raised in a loving family.

Aly is Jewish, and in one interview she said that being Jewish makes her feel so proud because she represents her community everywhere she goes(she comes from Romanian descent, but is Jewish).

What is amazing about her life, is that she started practising gymnastics when she was two years old – Aly found her inspiration in sports because she loves to watch on the VHS the “Magnificent Seven”, the gold-medal-winning U.S. women’s team at the 1996 Summer Olympics.

Aly practised at Exxcel Gymnastics and Climbing through Level 8, after which she has transferred to Brestyan’s American Gymnastics Club.

There her coaches were Mihai and Silvia Brestyan, and she trained besides Alicia Sacramone.

She has said when describing her relationship with Alicia that she is like her older sister.

In 2012, Aly Raisman finished Needham High School, after finishing her senior year via online courses while preparing for the Olympics.

Aly competed at the American Classic in San Diego, where she won tenth in the all-around with a score of 53.383.

She was placed twelfth in the all-around with a score of 54.050 at the U.S. Classic in Des Moines, Iowa.

Then she competed in the American Cup in Worcester, Massachusetts – she was second and in Italy of the same that year she won the title.

In May, Aly helped her team win a gold medal at the Pacific Rim Championships in Melbourne.

In October 2011, Aly competed at the World Artistic Gymnastics Championships in Tokyo where she became a team captain. Speaking of this position, she said that this role came naturally cause she is the oldest sibling in her family.

On this competition, Aly became recognized for her first pitching pass (round off one, and a half step out spin-off back handspring tucked Arabian dual face to punch front layout (punch front tuck during 2011), due to both its innovation and a high degree of difficulty.

In November of the same year, she has become a professional athlete, giving up her NCAA eligibility and a scholarship to the University of Florida.

Aly has signed with the Octagon sports management firm – once she said that this was a hard decision but that she does not have any regrets.

With it, Aly got the chance to have sponsors, and some of them are Ralph Lauren.

She was often described as a person who can handle the pressure well  – she was directed by the National Team Coordinator Márta Károlyi.

She has also said that Aly is giving all of her hear into a competition and she rarely makes mistakes.

Raisman put third all-around at the Olympic Trials in San Jose, California – later on, Aly was chosen as a part of the team that would go to the 2012 Summer Olympics. She became the captain of the team.

She was the part of London Olympic as the captain of the American team “Fierce Five.”

Aly won the bronze medal, in the floor final, she placed first with a score of 15.600 -she has become the first American woman to win a gold medal on floor.

She dedicated her floor exercise to the 11 Israeli Olympians who were killed by Palestinian terrorists at the 1972 Summer Olympics in Munich.

In 2012, Aly was injured during the Kellogg’s Tour of Gymnastics Champions in Ontario – she fell while performing.

She came back in 2014, and she was named to the U.S. National Team, along with Olympic teammate Gabby Douglas.

Her comeback was at the City of Jesolo Trophy where she won the gold medal with the U.S. crew and won single bronze medals.

Before Olympics in Rio, it was said that maybe Raisman would be the one to miss out on an all-around chance, but her strong plays in podium training on all events, and an injury to Laurie Hernandez suggested she would get the opportunity to qualify to the all-around. The team and herself qualified.

On the second day of the contest in the team final, she fought on balance beam, on vault, and floor exercise to help ensure the gold medal for the U.S. team and defend the title she gained with the Fierce Five in 2012.

At the end of the contest, she and her teammates entitled themselves “The Final Five” – the reason was that this team would be the last that will go on Olympic team Marta Karolyi would name before she withdrew.

It was declared earlier that, beginning with the 2020 Olympics in Tokyo, that competing crews would be lessened to four gymnasts instead of five.

Aly was the star of the documentary on Comcast SportsNet called “Aly Raisman: Quest for Gold”.

Aly participated in “Dancing with the Stars” in 2016 where she реrfоrmеd wіth Маrk Ваllаѕ –  she took 4th position during her time in the show.

During her high school, Aly was in a relationship with Jamie McGill they dated for several years and attended their high school prom together.

In 2016, Aly started dating NFL player, Colton Underwood – the couple met in Denver and secretly rendezvoused for a few months before it came out to the public.  These two were active on social networks, but still, they broke up in August 2017.

The most critical and painful time in her life came in 2017.

She, among other victims, came forward with claims that they were sexually abused by the former Olympic team physician, Larry Nassar. They claimed that this abuse started when they were just 15.

The next year, in January, Aly was one of the numerous victims that read impact statements at Nassar’s sentencing, and one month later she had filed a lawsuit against USA Gymnastics and the USOC alleging both organizations “knew or should have known” about the ongoing abuse – Aly has said that she has filed a lawsuit against them over their inability to “implement appropriate safeguards” to defend her and other athletes from Nassar.

Aly and other victims are awarded the Arthur Ashe Courage Award.

She released autobiography called “Fierce” – in the book she speaks about the abuse from the team doctor Larry Nassar.

She has said that not until other doctors checked her that Larry’s methods of examination were strange and made her feel uncomfortable.

Later he had pleaded guilty to multiple charges of criminal sexual assault.

Aly was a star in numerous videos – Maroon 5 music video “Girls Like You” featuring Cardi B is one of them.

In 2016, Aly Raisman was part of the “Gold Medal Families” – it was a Lifetime reality show that provided fans with a glimpse into her family life.

When she had a two-year break, Aly joked that every one like to call her “Grandma.”

Here we have met one beautiful and talented woman who has Net Worth around 2 million dollars, but the money is just one part of her success.

But some of her money comes from endorsement deals – and all of them are very successful and renowned companies like Rаlрh Lаurеn, Кеllоgg’ ѕ, Рlауtех, аnd Rеvіѕіоn Ѕkіn аnd ѕо оn.

She lives in Маѕѕасhuѕеttѕ wіth hеr fаmіlу and has a few luxury cars (a Ferrari worth $252,800).

She often speaks about her family and the connection she has, but she showed an act of real human courage when she dealt with allegations of sexual abuse and was brave enough to speak in court about it, and to move on later even better and more successful than ever before.