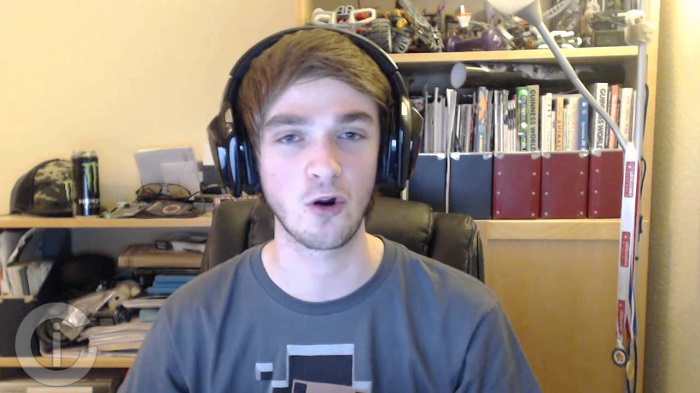 Ali-A is a popular British YouTuber and a gamer, real name Alastair Aiken, who is sharing 1-2 videos daily and until today he made over 2500 videos of gameplay.

He has over 8 million subscribers from all over the planet and is one of the most popular gamers ever.

Ali-a was born on November 6, 1993 in London. He grew up in a very happy home and has one brother Simon who is an often guest in his videos, playing along Ali-A.

He wasn’t happy at school and was bullied a lot so his mother didn’t have any choice but to send him to a private high school. He started uploading videos when he was only sixteen, so after he finished hihschool he was so popular that he didn’t enroll to any college to continue his schoooling.

He began uploading his clips in 2009 and the first clips were all about a game named Modern Warfare 2. After that he transferred to Call of Duty, especially to Black Ops 2, which gained him a lot of popularity and that is his most viewed video of all times.

He owns two gaming channels: Ali-A or Matroix with over 6 million subscribers and MoreAliA which is coming to an impressive number of 4 millions very fast and which started in 2013.

Ali-A or Matroix is intended for Call of Duty fans and it is his main channel. The second channel is for uploading videos of playing Minecraft, Pokemon GO, for vlogs and other games he plays.

In  2014, Ali-A hosted a gaming tournament Legend of Gaming. Beetween eight most popular legends of gameplaying Ali-A won the tournament. It was a great success for him, and after that he got some more sponsorships.

In 2015, he began dating Clare Siobhan Callery, another YouTube star ( also a vloger and a gamer) who originates from Leeds in England. They are still in a very stabile relationship. They often post their photos on Instagram and she follows him on his trips to America or Northern Europe.

In a lot of his videos his brother Simon appears and he is always proud to say they have a great relationship.

He is very connected to all the members of his family. He always congratulates his mother her birthdays, mother days and other special occasions on his instagram account. He says she has always supported him and that he is very thankful for it. Without her help he wouldn’t be the man he is today.

In 2011 he uploaded a video in which he spoke about harrasment at school and the problems he had that caused him to transferr to a private highschool. It was a very difficult period for him but it also turned him to gamin and that became his professional career.

Aiken has his own online store on the website www.aliashop.com, where everyone can buy fashion items such as caps, shirts and hoodies with his logo printed, or with one of his slogans on. He often wears a baseball cap while playing games.

He also has an account on SoundClouds, a place where he shares his favourite songs for his fans to hear.

He is not playing his games on only one console but on a lo to them: PlayStation 3 and 4, Xbox One and 360, Wii U, PC and iPhone.

Ali-A Adventures is his own graphic novel made for the kids ages from 8-12 and it was presented in  an introduction for a new video game Alien Liberator 2, which Ali played. In the novel Ali-A Adventures-GAME ON!, Ali-A plays himself in a world where video games connect with reality and he is the one to save our world.

Once Buzfeed stated he died in a bus accident, but it turned out not to be true as soon as he posted a video that he is alive and still gaming.

There is one interesting fact about ali-A. he has written his name into the Guiness book of records. He holds two Guiness World records: the most subscribed and the most viewed Call of Duty channel of all times.

Ali-A is a very known British Youtuber, especially known for uploading gameplays like Call of Duty and  Pokemon Go on his YouTube channel. Although he was bullied at school he became a wealthy and strong individual who is now showing to his bullies that he has beat them in their own game.