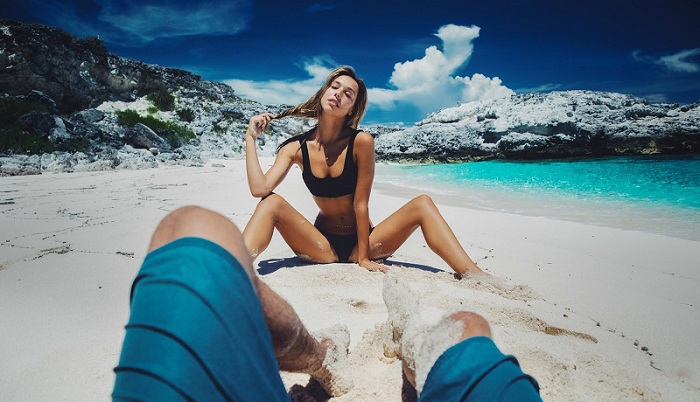 Alexis Ren is a popular American model who grew up into a big Internet celebrity, mostly because of her great bikini photo shoots.

Alexis Rene Glabach was born on November 23,1996 in Santa Monica in California.

She has four siblings and she comes from a family which has roots in Russia and in Germany.

The names of her siblings are Amber, Devin, Alisa & Ace

Her father Frank is a lawyer and her mother was a nutricionist.

Her mother always looked out for her families health and eating habbits since she was a nutricionist expert. Unfortunately she died of cancer when Alexis turned 18.It was a devastating experience for Ren because they had a wonderful daughter-mother relationship.

During that period she developed an eating disorder and had problems with her temperr.

She never went to a public middle school because her parents decided to home-school her.

She has spent her childhood in Santa Monica

She was  13 years old when she was  approached in order to give her an opportunity for modeling.

She signed her first deal with Brandy Melville. She became a freelancer for nearly a year and did tens of small projects until she was noticed by Nous Model Management and by the time she was 14 years old she was booked for numerous ads , the first one with ‘Seventeen’ magazine.

She became widely known at sixteen, after she posted one of her phozo shoots on Tumblr.

‘Nous Model Management’, ‘Chic management’ and ‘The Lions Management’ are some of the best modeling agencies and Alex worked for all three of them just a few years after she started modeling.

After that all doors opened for her: she has worked for brands such as Puma,, Calvin Klein, Gooseberry Intimates, Loreal and Miss Holl. She also came to the covers of many magazines.

She managed to finish her high school education in 2013 but by that time she had no interest for going on college and continuing her studies.

She has learned that she can get a good income through modelling.

Her first runway debut came in 2014 for ‘Sahara Ray Swimwear’.

In 2015 she was featured in the swimsuit issue of a known “Surfing Magazine”. That was soon after her very successful campaign with Calvin Klein which resulted with a video called “Put It On, Take it Off”.

In the summer of the same year she posed as a cover girl on Maxim.

She was also featured in a lot of ads, especially for different mobile games, 14such as “”Final Fantasy XV: A New Empire”.

She is s huge Instagram celebrity which is proved by a very big number of followers: over 10 million people follow her sccount.

She was in a relationship with Jay Alvarez from 2014 but they have broken up in 2017 and in a very ugly way: arguing over Twitter and attacking each other in public.

Bryant Eslava is a very close friend of hers. Hr is a known young photographer who has a way of getting life into his photos and edits them in the way that they become remarkable.

She has a dream to become a Victoria’s Secret model someday.

She launched   her own line of sportswear named “Ren Active”. She is very active in exercising herself.

Learned by her mother for years, Alexis watches out her diet and avoids bread, red meat and junk food. She eats a lot of vegetables and fruits and never consumes sugar and alcohol. She drinks water in almost all occasions.

She likes to draw, play the guitar or dance. Dancing is a piece of cake for her because she trained as a ballet dancer for 10 years.

Alex  has four tattoos on her body, most of  them  related to her beloved mother Cynthia. She has a little spider behind her ear but othr three tatoos are all about her mother: her mother’s birthday, the day she passed away and her mother’s signature.

Alexis loves animals so she always has a cat or a dog for a pet.

She trains Pilates and Yoga which is another great legacy her mother left her.

She is a big fan of Gigi Hadid and emphasizes how Gigi represents everything she likes in a moder woman.

Alexis knows how to ride a skateboard. She has learned it in her teens, on the streets of Santa Monica.

She also knows how to shoot from a weapon and she posted a photo of herself at the shooting range.

She had  her first film appearance in the comedy movie called “Deported” which was released in 2017.

Alexis Ren is a beautiful American swimsuit and lingerie model known for her social media accounts where she posts her photos.