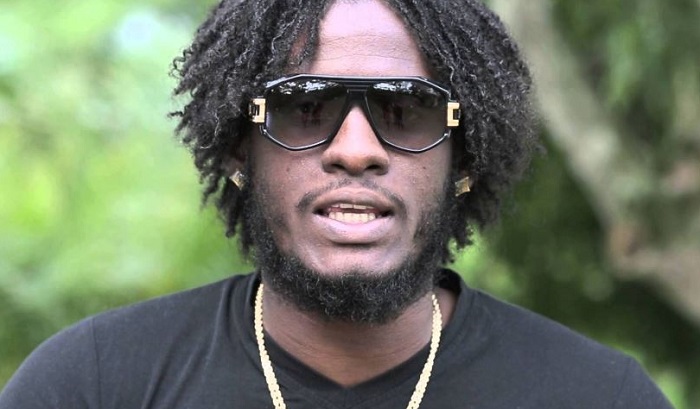 Aidonia is one of the most prominent dancehall artists from Jamaica who made his career in dancehall and reggae genres at the beginning of the new millennium.

He is also known for his controversial behavior and rants with other dancehall stars.

He was born as Sheldon Azitana Lawrence on April 6, 1981, in the town of Kingston, which is the biggest Jamaican city, also serving as the country’s capital city. He said that his childhood was good and that he can’t complain about anything, but he wishes that he stayed more connected to his father who was often away.

He grew up alongside his three siblings and was raised by hardworking parents. His mother’s name is Monica Lawrence and she is a school teacher and her son’s biggest supporter.

His father worked in the military so he was away from home very often. When he started making trouble at school by not learning and skipping class his mother became very worried. She was worried that she will not be able to handle her son’s behavior.

He was a student at Meadowbrook High which was later changed into Mona Heights Primary highschool. He said that it was an interesting experience to be there, but he wasn’t really into any of the things that they did. He was always more interested in art.

He was always interested in music but he gained a special interest in it after watching a show named Sting. It was in 1993.

He witnessed the clash of Beenie Man and Bounty Killer and it looked very impressive to him. It motivated him to focus on his own music because he had a wish to enter the Sting arena too.

Sting was a very important Jamaican stage show considered as the biggest dancehall show on the planet.

Sting proved itself as one of the most important festivals for a lot of famous dancehall artists who rose to fame after winning those clashes. Because of that, he got a lot of attention later as well.

This festival is different because the crowd at these clashes decides who is the winner. They do it by throwing bottles to the stage onto the artist they dislike. Later the bottles were replaced by plastic cups to minimize the possibility of wounding.

The festival started getting big sponsors but Isaiah Laing, the founder of the Sting, announced that the festival is closing in 2016 because it was losing him money.

He was already a huge fan of an artist named Bounty Killer but it was after his battle with Beenie Man that he realized that this was something he wants to do himself.

It was in 1993, and he was only 12 years old at that time. Since he was some of a troublemaker and didn’t want to attend a class he was expelled from the school.

His mother who was very angry because of it (she was a school teacher) decided that he has to have a male role model in his world.

During high school, Aidonia had formed his DJ crew with some of his good friends and they called themselves Jah A Guide. They had a lot of fun, but they weren’t anywhere near close to any fame so they parted ways pretty quick.

Aidonia has also written all of the lyrics for his songs. After being expelled from high school his parents decided that it is best for him to move to the United States to his father. He started working there, in a big company named FedEx.

Aidonia often visited his home in Jamaica where he continued making music with his friends whenever he was there. He tried to enter the NY’s dancehall scene but he had no luck in doing that.

All the time he was in New York his friends and musicians from Jamaica tried to persuade him to return to Jamaica to work on his music and start his career as a DJ.

Once he returned to Jamaica he started being more serious about music. He was introduced to Mr. G (earlier known as Goofy), who already made his career in dancehall music.

Mr.G is the founder of his own record label named Young Blood and he signed a lot of famous artists to it, like Buju Banton, Bounty Killa, and Richie Spice.

Goofy helped him record his first song called “Many a Dem”. It was released in 2003 through Goofy’s label titled Young Blood.

After his release was received well he began his collaboration with Orizen Entertainment and their employee Ros Pinnock.

In 2004 he entered a musical event for DJs called “Battle Thursdays”. He did well there and the voice of him spread further. He was very happy about this as well because he was finally getting into the world of big people.

He had several hits in this period, most notable being the “Chicken Head”, “Inna Di Ghetto” and “Kingfish Ah Come” amongst others.

He also recorded “Sen Fi Dem”, a single made in collaboration with an artist he admired named Bounty Killer.

That is why he was soon noticed by Skatta Burrell who offered him his studio for recording music.

Skatta is a respectable music producer, songwriter and a promotor who owns his record label Downsound Records.

Collaboration with Skatta brought him his first hit single which was made on Skatta’s ridden. It was a single “Lolly” released as SoundClash 1.

The hit made Aidonia being one of the most wanted DJ’s.

It wasn’t long that this huge hit found its way to Strictly The Best compilation released by VP Records.

In 2008 he released his album named “Then and Now”. It was released by Skatta Productions and Jamdown Ltd.

In 2009 he was featured on Bolt Action, a mixtape released by Federation Sound. He was very happy because of this since he had a better view of a completely new fandom.

His dream of creating a crew started getting real in 2p11 when he creates J.O.P. with Govana, Shokry me, Tanso, Jayds and Size 10. Their two biggest hits were “All 14” and “Run Road”.

In 2013 he had released his second album his EP called “One Voice” with ten singles of which two are made in collaboration with Aisha Davis and Bounty Killer.

In the summer of 2015, he had released an album called “Project Sweat”. Three most prominent songs from the latest album are Gyal Position, Boom Gal and Clock.

During his career, he has also released three mixtapes: Zinc Fence & Gunshot in 2007, Bolt Action in 2009 and Takeover in 2011. He tried to move into many directions when it comes to his career, but not so many were actually successful tries.

Zinc Fence & Gunshot mixtape consisted of 33 singles and had many guest appearances on it, from Vybz Kartel to Ninja Kid and Dr.Evil.

In 2015 he had released his own clothing line and confirmed that it is something his fans asked him to do a long ago but he never got around to it. He feels that music and fashion go hand in hand and that it is going to be a good business venture for him.

In 2016 Aidonia went on his European tour which was very successful.

Aidonia’s manager is his brother Law Lawrence. He is very close to him. The picture of Aidonia wiping the tears of Lav at his wedding went viral and received positive comments all over social media.

In 2017 he released a single “Yeah Yeah” who became a smash hit. It was released in a raw and clean version of his mini-album with the same name. The album was released through 4th Genna Music.

In 2008 Aidonia and Vybz Kartel were questioned due to the photo which went public on which two of them lose with illegal guns.

This questioning took place just weeks after Aidonja was placed in custody. He was charged with gun possession.

As for his personal life, he got married to his longtime fiancee Kimberly Megan in September 2016. The pair have been dating from 2012. At the time of the wedding they already had a 3-year old son called King Khalif.

Aidonia is very close to his son and often posts photos and videos of him on his Instagram account. He joins other fathers for the school day and other things

Aidonia is very active on his social media and has over 600 thousand followers on Instagram.

He has a lot of tattoos and likes to wear gold jewelry.

His fans know the origin of his stage name Aidonia: it’s a combination of two names Aitana and Donia. While Aitana is his own middle name Donia is a nickname other football players gave him when he was in the field.