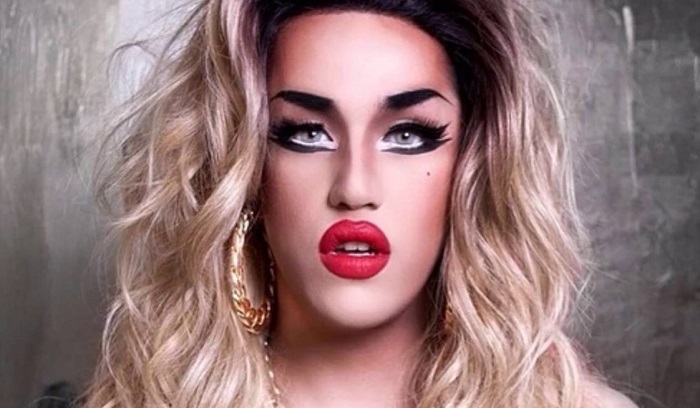 Adore Delano is a very popular American drag Queen who fulfilled his dream of becoming noticed after appearing at the 2008 American Idol show.

Daniel Noriega is the name of the person hiding behind Adore Delano’s stage name.

Adore gained even more fame through his appearance at the  2014 RuPaul‘s Drag Race.

This year was especially great for Adore because his debut album came out too.

Daniel Anthony Noriega was born on September 29, 1989, in the town called Azusa, located in California.

He was a very young teen when he decided to share his inner secret with his family: he revealed that he was gay.

Daniel’s mother was always by his side no matter what so he never felt judged or uncomfortable because of his sexuality.

Nowadays he insists on calling himself a non-binary person because he doesn’t feel like he is of any gender – he simply feels better by being a woman.

He had been raised alongside four older siblings and he liked growing up in such a big family.

Adore has a mixed descent, from Mexican and German to Native American.

Adore loved music from a very early age but the genres she liked best were the rock and especially punk.

While growing up Daniel realized that he liked wearing women’s clothes much more than men’s so he started doing it.

Daniel’s love for music was spotted while he was not even in high school: he joined a band in his secondary school and it was called “Teenage Rampage”.

He was a pupil at the Paramount Elementary School and Center Middle School and he feels that this period in his life was marked by his search for identity and lack of understanding from his school colleagues.

Adore was a student at Sierra High School but didn’t continue to educate herself and go to college.

Daniel became Adore and joined the contestants on the American Idol in 2008, trying to make a path for his music career.

His performance of “Tainted Love” by Gloria Jones was praised by a lot of people and it brought him the attention he searched for.

Adore entered the Top 16 of American Idol but didn’t succeed getting into the finals. However, Adore was satisfied because she felt that she showed her potential and her skills and believed that it would be much easier for her now to get famous through music.

Adore had a Youtube channel that gained thousands of views due to her performance on the American Idol.

The videos pf her on the American Idol were the most viewed videos on her Youtube channel.

This performance was also a big help for her music career because she became recognizable and she soon had more gigs than she could handle. It was a powerful financial injection for her and Adore could finally invest more money in herself.

Just one year after the show Adore released her single named “24/7” which was followed by a music video.

The song was very listened to and brought even more attention to Adore which she liked a lot.

Her name was now one of the hottest in the world of drag queens.

She had a great role model in West Hollywood’s drag queen named Raven. Raven was the main performer at “Micky’s” and Raven was the reason why this club had so many visitors every day.

Adore soon became popular just like Raven. She became one of the most powerful names in the drag queen industry.

For those who don’t know where his stage name came from Adore is the name of her brother’s friend which he liked a lot and his new surname Delano is a name mentioned in the tales of demonic children.

In 2013, Adore became one of a few drag queens to be invited to walk the stage on the Los Angeles Fashion Week. Adore was very pleased with it since he knew it was an honor.

Adore also entered the RuPaul’s Drag Race and became a contester there. She was very noticed there and eventually entered the top ten contesters but didn’t win the race.

Adore’s new single was released the same year and it was the single which announced her new album titled “Till Death Do Us Party” which came out in the summer.

The album “Till Death Do Us Party” was very popular and it rose almost to the top of the US Dance/Electronic Albums Chart.

After the success of this album, she started working on a new album which was scheduled for release in 2015. However, it came out in 2016 under the name “After Party”.

The album contained fewer singles than she stated it would be because she kept half of them for her new album.

“Dynamite” and “Take Me There” were the leading singles from this album.

Adore also gained a role in the documentary movie named “Dragged and TupiniQueens”. This movie was directed by Joao Montero and it opened the door to the lives of drag queens and their struggle with stigmas.

Adore entered Ru Paul’s Drag Race for the second time but after a few days, she decided to leave the show which made her the first contestant ever to do it. It was after the second episode that Adore left the show.

Adore lives very cozy and is financially independent. Adore loves fast cars, especially Ferraris and she stated that she will buy one as soon as she could.

Due to her popularity after the American Idol, she was invited to the Ellen DeGeneres show where she was a guest.

In 2016 Adore won the title of Drag Queen of the Year which was a huge accomplishment for her.

In 2017, Adore released her third project called  “Whatever” and decided that she wants more control of her own life.

That is why she filed a lawsuit against her management company named “Producer Entertainment Group” and accused them of ripping her of hef hard-earned cash.

The company did the same thing and suited her back.

In 2017 Adore  Delano went on her first big world tour and she was very thrilled about it since she loved to travel and meet new people.

She visited Australia and even the U.K. although she stated that she partied best in her visit to South America.

Adore was also invited to participate in a TV series called “This is Drag” where she joined all other famous drag queens while being filmed in Toronto, at the Pride.

In 2018 she appeared in Courtney Act’s Christmas Extravaganza as a part of Channel 4 Christmas Special.

The View also interviewed Adore in 2019, alongside Nina West and Monét X Change.

In 2019, Adore went on a tour called “A Pizza Me Tour” through the UK, Ireland, and the Netherlands.

It wasn’t the first time she toured in Europe, she did it a few times before.

Adore was very proud when she was hired to appear in Taylor Swift’s music video for her single “You Need to Calm Down”.

Adore was the first drag queen to leave the race but she didn’t do it without reason.

Unfortunately, Adore’s father died during the time she was on the drag race so she left the show to go to the funeral.

At the same time her boyfriend broke off with her and it was too emotional for her to continue the race.

Her former boyfriend split up with Adore in a very ugly manner- he texted her while she was on the show.

Adore was also in a relationship with a young Australian Kristian Francuski, a barber from Perth whom she met in Australia.

Michelle Eloe is Kristian’s today partner and the reason for their split is still unknown.

It is not known with whom Adore is today because she avoids the question in the interviews.

Adore has several tattoos and has a crescent moon tattooed on her butt. Adore also has the word “MEOW” tattooed on her right hand, and every finger has one letter tattoed on it.