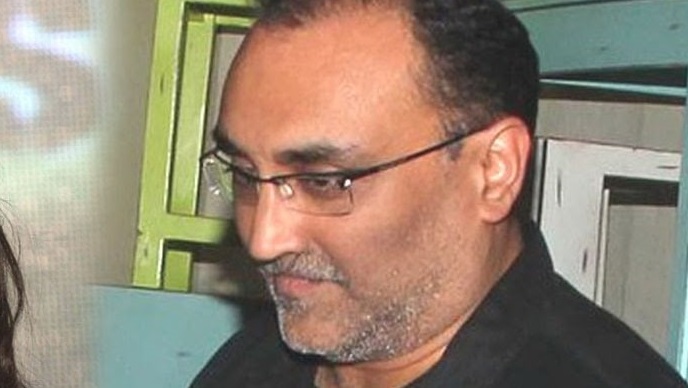 Aditya Chopra is a very respectable Indian filmmaker, producer, and a director who became known for his hits “Mihabbatein”, “Befikre” and “Rab Ne Bana Di Jodi”.

He is also the head of India’s entertainment company named Yash Raj Films. He is often called Adi, which is his nickname.

Aditya is different from other filmmakers because he doesn’t like publicity so he has a very media-shy personality.

That caused the fact that there are not many of his public photos revealed.

He was born as Aditya Chopra on May 21, 1972, in the big city of Mumbai, located in the India’s state of Maharashtra, where he still lives.

He is one of the children of Yash, a known Hindi films director. His mother is named Pamela Chopra and she was his great support both through his childhood and adult career.

He was a student at Bombay Scottish School after which he enrolled the Sydenham College of Commerce and Economics.

He was a very smart and talented student and was one of the brightest in class.

He was 18 years old when he started being more engaged in movie making after years of doing it as a hobby.

He was an assistant director to his father Yash when he worked on several of his movies.

He assisted for a romantic musical drama movie called Chandni, filmed in 1989 and for 1993’s movie titled “Darr”.

In 1992 his father has directed a romantic movie called “Parampara” for which Aditya himself made the script.

He has also written a script for “Aaina”, a Bollywood film produced both by his father and his mother. The fact that he was born into a movie family made his start a little easier but later he had to prove himself as a director so not anyone could say that he is famous only because of his famous parents.

Aditya successfully gained a lot of experience this way because as an assistant director he was involved in all activities regarding the movie.

He was 23 years old when he made his first independent movie where he served both as the writer and the director.

The movie was named “Dilwale Dulhania Le Jayenge” and it was a romantic movie starred by Kajol and Shah Rukh Khan. This movie was a huge hit and it earned a lot of money. This movie managed to get ten Filmfare Awards which is an astonishing success.

This movie was Aditya’s great love since he had been working in its script from the tike he was 19.

He was so convinced about its success that he persuaded his brother Uday to work with him as an assistant of the director in this movie.

He also did the same with his cousin Karan Johar and later stated that making of this movie was so much easier for him because he was surrounded by his family.

This movie eventually ended to be one of the most popular India’s ever and it eventually won the National Award for Best Popular Film.

Aditya also wrote the story of a big hit called “Dil To Pagal Hai”. This musical romance movie was directed by his father Yash Chopra and it was released in 1997.

The movie has earned almost ten times more than it’s budget proving to be a huge hit. He directed a musical romantic movie with Shah Rukh Khan and his brother Uday Chopra in the lead role.

The movie was also a big hit and it was also a breakthrough hit for his brother who also has a respectable movie career as an actor.

His next movie, also made under YRF, was named “Mere Yaar Ki Shaadi Hai” where his brother Uday also starred.

This movie received mixed reviews. In 2004 he co-produced three hit movies alongside his father, under YRF Productions: “Hum Tum”, “Veer Zaara” and “Dhoom”.

All of these movies had earned a few times more over their original budget. “Veer Zaara” has also won the National Film Award. This gave them a confirmation that their company Yash Raj Film is the leading Indian Entertainment company.

His career continued with hits he produced and even wrote himself and confirmed his huge talent as a screenwriter and a director.

He was involved in the making of a crime comedy movie “Bunty Aur Babli”, a romantic comedy named “Salaam Namaste”, which was entirely filmed in Australia, a thriller called Fanca and a National Award-winning movie titled “Chak De India”.

In 2008 he directed a movie for the 3rd time with “Rab Ne Bana Di Jodi” which became a huge hit. The main protagonists of the movie were Anushka Sharma and Shahrukh Khan.

This movie has confirmed Aditya as the most prominent Indian director and raised his net worth to an enormous number.

The company has produced a lot of talented directors and screenwriters who later became independent artists and more famous than they have ever imagined.

They also made different production projects for other filmmakers such for example Pradeep Sarkar.

YRF’s biggest problem at that time was a technical problem. It was about their lack of a real and high-quality studio so the company decided to build their first own studio in the city of Mumbai in the year of 2005.

The first movie that was scheduled for filming in their new studio was their commercial hit movie called “Fanaa”.

The studio was designed by Aditya Chopra himself with the help of his wife Payal Khanna. The studio was located on a very big number of eighty-one thousand m2 and was 6-storeys high which was a very big deal for filmmakers at that time.

Aditya’s company also distributed a lot of Indian independent movies which was very lucrative for the company and gave them the power to become one of the most successful and important distribution companies in India.

Since the YRF had a lot of successful movies in the category of musicals Aditya decides to put some more focus on the music industry sp they started releasing musical albums.

rThe the first album was a soundtrack of “Veer Zaara”, one of the most successful musicals of that time. They have also released albums from many prominent musicians such as Jatin Lalit, Pritam, Raghu Dixit and more.

In 2007, the Walt Disney Company tried to enter the Indian cinema business by offering almost $400 million for 49% of YRF’s stocks. Aditya, his family, and partners decided to decline the offer because what they really wanted is for the company to stay independent.

In 2010 Aditya took over the company on the place of the chairman and soon brought it back on the path of earning money.

In 2011, after the success of the comedy movie titled “3 Idiots” and the movie named “Bodyguard,” the company decided to invest in three movies at the same time which was considered to be a very brave but risky business move.

The films in question were “Dhoom 3”, “Jab Tak Hai Jaan” and “Ek Tha Tiger”. The movies were very expensive and had cost a lot since they engaged some of the most paid Indian actors such as Amir Khan and Salman Khan. All three of these movies became huge hits and earned 3 to 5 times more than its budget.

The most lucrative of these films was “Dhoom 3” which was released a little before Christmas 2013.

After his father left the company in 2012 Aditya became the chairman of the company and it finally entered the market in January 2013 but with one important note: it was opened only to business in India.

Aditya also opened their production base overseas by creating YRF Entertainment, a part of the company which was oriented only to the production of international movies.

In 2012, the company has released a movie called “The Longest Week”, which was really a romantic comedy starring Olivia Wilde and Jason Bateman.

Their next release was the movie with Nicole Kidman and Tim Roth and its name was “The Grace of Monaco”.

In 2008 the Indian tabloids have released the photos of Aditya Chopra leaving the private screening of a movie titled “Ghajini” and the photos revealed him very scared, almost petrified by the camera.

He wanted to avoid paparazzi so desperately that night after the screening that he left his phone behind him after it fell on the road and was smashed by the fall.

This cause big headlines in tabloids which claimed that Aditya has a social anxiety disorder.

In 2015 he made a huge comeback as a movie director by making “Befikre”, a movie with Ranveer Singh and Vaani Kapoor in the leading roles.

The movie has earned a lot of money but due to the currency demonetization made by Indian government it actually generated loses and didn’t make it in earning enough to cover its original budget.

As for his personal life, there is not much information out in the open. He got married to Payal Khanna in 2001 but they got separated in 2009, after eight years of marriage.

Payal and Aditya didn’t have children together. They were very quiet about their divorce and Aditya financially secured his ex-wife in her further life.

After that Aditya started a new relationship with a woman named Rani Mukerji which led to their marriage in Italy in 2014.

Rani is a popular beautiful actress who also has a very respectable career. She is the winner of several Filmfare Awards and is very popular in India.

She is very involved in various humanitarian events and works with several organizations created for protection women and children.

That is how she became the P&G ambassador in their campaign for improving childhood education making going to school possible for more children.

Their daughter Adira was born two years later, in 2016. After she gave birth to him she paused her career for two years because she wanted to spend time with her kid.

She also stated that she would like to have a second child soon but that she is afraid that she may be “missed the bus”. She says that she thinks that she should have started a family earlier and enjoyed it more.

Aditya’s and her marriage seems to be functioning great.