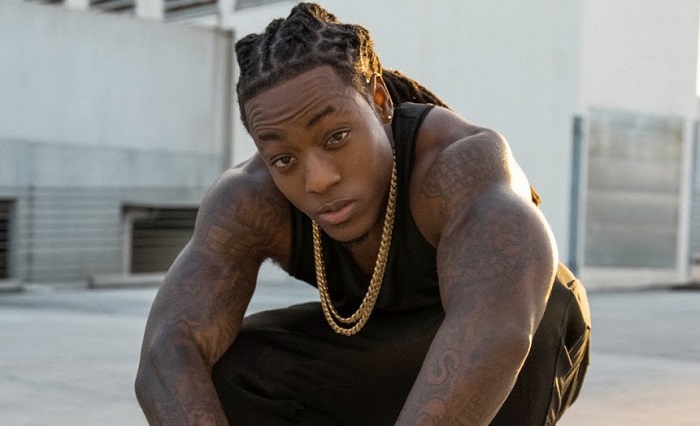 Ace Hood is a very respectable American rapper who originates from Florida and is best known for his hit songs titled “Bugatti” and “Hustle Hard”.

He is also known by his other stage name Lil’ Ace.

He was born as Antoine McColsier on May 11, 1988, in a town named Port St. Lucie, settled in Florida, in the United States.

He has spent all of his childhood in Florida and was a student at Deerfield Beach High School, which is a public high school in Florida.

He had big hopes of becoming a major football player but it was in his 10th grade that he got injured heavily and it became obvious to him that he could not become a good player as he intended.

He has also realized that he was never going to succeed in becoming a professional player due to that injury because he would be injured more often and severe.

That is when he turned to a career in rapping and started working on it, performing in the clubs and on various events.

He started collaborating with a local hip hop group named “Dollaz & Dealz” which resulted in they’re collaborative single named “M.O.E.” which was released in 2006.

He successfully attended various mic events and showed up in almost every talent show in his town and nearby.

In 2006, he was very lucky because he met DJ Khaled in front of a radio station and he stopped to meet him and let him know about his work.

DJ Khaled was already a very known personality so Ace was very pleased to see that DJ Khaled took his autobiography and his demo tape to listen to and maybe call back.

DJ Khaled demanded that Ace perform a freestyle of “I’m So Hood” in front of him (which was DJ Khaled’s song and it is one of the most popular ones) in order to see his skills.

Ace Hood became one of the rappers which found their place at Freshmen ’09 list made by a popular hip hop oriented magazine called XXL Magazine.

In 2008, he has released his 1st album named “Gutta” which was featured by many known artists such as Rick Ross and T-Pain.

Ace Hood eventually released two mixtapes and they were titled “Ace Won’t Fold” and “All Bets on Ace”.

He often guests appeared on DJ Khaled’s songs because of he eas his mentor at first. “Out Here Grindin” was one of the most notable songs on which he appeared.

Ace Hood and DJ Khaled guest appeared on the WUAG Greenshore radio in September 2008 in order to promote his new album “Gutta”. “Gutta” started off really good, coming to no. 6 on the Billboard 200 list.

His second album named “Ruthless” came in June 2009 and was released by Def Jam. The guests on this album were Rick Ross, T-Pain, Akon, Birdman any more. The album went to No. 23 on the Billboard 200 chart.

In 2011, Ace released his 3rd album named “Blood, Sweat & Tears” and the leading single from the album was titled “Hustle Hard”.

This single came to No. 60 on the Billboard Hot 100 Chart and was produced by Lex Luger. One of his other hit singles was “Body 2 Body” with Chris Brown and it entered the Hot 100 on the 65th place.

After the success of this album, he decided to go on a tour and it was named “Hustle Hard Tour”.

He guests appeared on DJ Khaled’s new album “We the Best Forever” on three songs.

In 2012, Hood got involved in a collaboration with Bow Wow, for his single “We Going Hard”.

He made a lot of guest appearances on other tracks from Jadakiss, The Game and Talib Kweli.

In 2013 he has released his new mixtape titled “Starvation 2”. Meek Mill and French Montana were featured in this tape.

In 2013 Ace releases a lead song for his new album “Trials & Tribulations” titled “Bugatti”. This single was features by Future and Rick Ross. He also released a music video for the same song because the song became a huge hit.

It went to No. 3 on the Hot 10p list. This single is still his biggest hit. The remix of this song was released in May 2013 and was featured by DJ Khaled, Meek Mill, Wiz Khalifa, 2 Chainz and more.

His second single from the album was named “We Outchea” and was released in June. He was very pleased that he made it in collaboration with Lil Wayne. Lil Wayne is also signed to Cash Money label.

In 2014 he has released his new mixtape named “Starvation 3” which was produced by Cool & Dre and The Renegades. He also released “Body Bag 3” in August the same year. He was hired by Reebok to act in their commercials.

His single “Top of the World” appeared in a video game titled “NBA 2K10”.

In 2013 he was featured in a reality TV show called “Mobbed” but he was also banned from having a concert at the Syracuse University due to his bad language.

The University considers that he promotes violence in his music, more than other hip hop artists, and they don’t want to give space for that kind of music.

In the summer of 2016, he began distancing himself from his mentor, DJ Khaled, stating that he wants to go to another direction with the music.

He announced on Twitter his soon separation but didn’t cause much disturbance at DJ Khaled who is known to be a very calm character.

He also rose controversy after he tweeted that he was paid $250,000 to be featured on the single made by a Ghanaian rapper named  Sarkodie.

Sarkodie first claimed that he was reached out from Ace Hood’s management that Ace wanted to make collaboration so he came to the States to shoot the video for his single “New Guy”.

After finishing the project and after Ace was featured on this song Ace announced that he never reached out for Sarkodie and that it was the other way around: that he was paid to be on the single.

Ace Hood has made his own brand called Hood Nation and is today more involved in working with associations which promote black people.

He is highly involved in the “Black Lives Matter” movement.

In 2018 he has released his new project “Trust the Process II: Undefeated”.

He was in a long relationship with Shanice Tyria Sarratt and had two daughters with her.

They were twins named Lyric and Sailor Blu and were born in May 2011 but Lyric died very soon after she was born because of health complications she sustained. He also has a son Antoine Jr., born in 2014.

He loves his kids very much and censors his words in front of them. He also shapes the dates of his concerts and tours in such a way that they won’t feel his absence too much or for a longer period of time.

He was nominated for BET Hip Hop Awards three times (two times for “Hustle Hard” and once for “Bugatti”) but the didn’t win any.

He split with his girlfriend Shanice in 2015 in an ugly manner. She accused him of cheating and he kicked her out of his home.

When she came back to pick her things and belongings they had another fight which finished with police arrival and Shanice’s arrest.

In 2015 he started dating Shelah Marie, an actress.

As for his personal looks, he is very muscular and strong. He likes tattoos and has a lot of them on his arms.

He owns a customized Gold Jeep Wrangler worth $40 000 plus customizing. The inner side of the car is completely covered inexpensive leather.

He has a red Range Rover and does not own a Bugatti although sings about one.

Porsche Panamera is one of his white cars, and the second is the Porsche Camaro.

He is a proud owner of a very expensive $60 k Rolex watch which he almost broke in front of the camera.

He lives in Miramar in Florida in a big and beautiful home.

He is on a pescatarian diet, so he mostly eats fish but he also likes to eat chicken too. He has a healer named Audrey and is focused on changing his path.

He is dedicated to saving 60% of his earnings so he doesn’t spend money unnecessarily and keeps it to earn for his kid’s college.

That is why his music changed and it is not about flashy cars and clothes and money but about real life issues.

Not many people know that he worked half-time as a school bus driver and that he took many jobs just to help his mum when he was young..and now he says that he appreciates the experience because it made him who he is today.